Comics retailer, Swamp Thing fan and elite comics blogger Mike Sterling's site Progressiveruin.com is one of my favorite places to visit on the Internet, in part because it's always open. Not only does Sterling update every single day, but since I've been reading, I don't think he's ever taken a day off or gotten sick or lost his Internet connection or any of the other little things that tend to keep folks from providing me something other than lolcats to look at on a daily basis.

He has a pretty great post today revolving around the Silver Age Justice League and their collective teen sidekick Snapper Carr, whom Sterling seems to single out for some abuse.

Why would anyone have anything negative to say about Snap? I don't know, but I suspect it's sour grapes; Sterling is just jealous that Snapper spent his teenage years hanging out with the World's Greatest Heroes, while young Sterling was splashing around swamps looking in vain for muck-encrusted mockeries of men to hang out with.

Was that last panel awesome or what?

Let's look at it again: 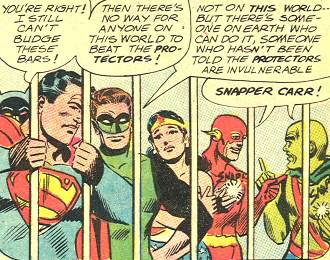 God, what a great panel! The range of emotions on the various Justice Leaguers' faces, from the very uncomfortable Wonder Woman to the totally perplexed Hal Jordan to the surprisngly animated and puckish looking Martian Manhunter.

And the best part? The Flash and Manhunter doing that sitcom thing where they both have the same idea at the same time and announce it to each other (Since J'onn is a mind-reader, I'm surprised he doesn't do that, like, constantly).

Anyway, I don't have anything else to say about it. It's just been, like, twenty-some hours since I've last mentioned J'onn J'onnz here, and I'd hate to let a whole day go by without talking about him, you know?
Posted by Caleb at 5:56 PM

Declare your man-crush for the manhunter and be done with it! (would that make it a manhunter-crush?)

If you have to depend upon Snapper Carr, then the world is doomed. DOOMED!