You know who should draw JLoA? Norm Breyfogle.

I don't know if you've been reading Justice League of America lately, but man, it is one ugly-looking book. I had to drop it, despite my affection for the team, every character on its current line-up, and the skills of its writer, Dwayne McDuffie. The art was just that bad. I just can't look at regular penciller Ed Benes' work on this team—half the time I feel like I walked in on someone masturbating, and the other half the time it just hurts my eyes. In fact, the only thing worse than Benes' art on JLoA is fill-in artist Joe Benitez's work, which (perhaps due to deadline crunch) was not only weirdly Liefeldian in design, but so devoid of detail and setting that it made Benes' layouts look like those of George Perez.

The good news is that if the rumor of the new 22-pages-per-moth rule for DC artists that Rich Johnston was reporting is true, Benes can't possibly stay on the title for long. Not only is he not very good, but he's just not very fast. Even cutting as many corners as he does, there's been an increidble number of fill-in artists in the book's short history.

So perhaps DC will be looking for a new artist to take over the book soon.

May I make a suggestion? How about Norm Breyfogle?

Now, everyone knows how great Breyfogle is when it comes to drawing Batman, but he can handle Batman's whole running crew equally well.

For example, check out these pages, in which Breyfogle draws five of the Big Seven: 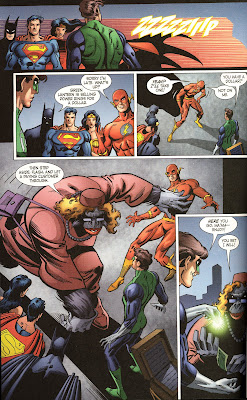 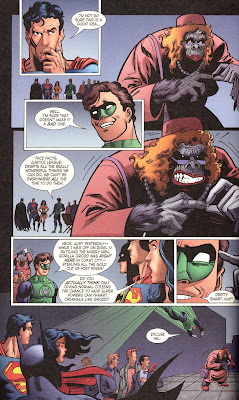 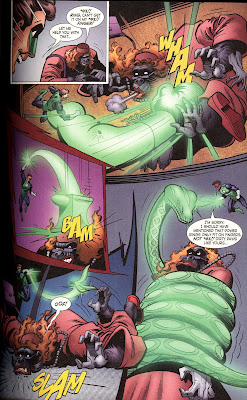 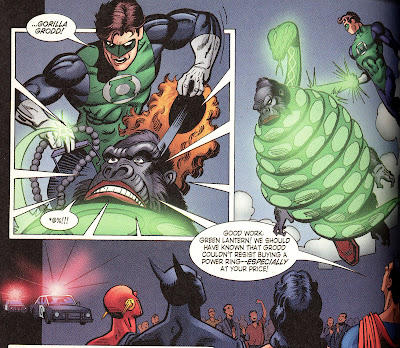 The Leaguers are all looking good, as is the giant-sized Gorilla Grodd. Sure, there's not a lot of background detail on those pages (which is one of the things I always complain about in Benes' art), but take some time to gander at the page lay-outs, the angle at which the Trinity comes down on the first page, the dramatic and kinetic "camera" angles of the first two pages, the subtle way the panels move your eyes across the page in the first half of the third one (and note the "background action" of Grodd being moved up to the foreground), or the panel borders exploding during Jordan's breif battle with Grodd.

Damn, those are some nice pages.

And I love all the little details Breyfogle works into the story, like Jordan puffing up his chest in the second panel, or the look of maniacal glee on his face when it comes time to inflict violence upon his enemy 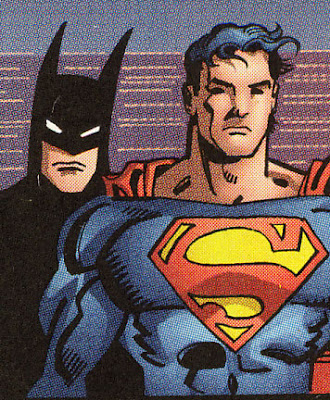 You know, I don't think I've ever seen Batman's bat-ears blowing in the wind before. Huh.

They're from "A Penny for your Thoughts, a Dollar for your Destiny!", a short story written by Brian Azzarello and inked by Sal Buscema for 2004's DC Comics Presents Green Lantern. If you'd like to read the rest of it (those aren't even the good parts), I'm afraid you'll have to seek it out in the back issue bins, because DC never saw fit to reprint the special series of eight one-shots. This despite the fact that the entire Tangent series is available in trade.

The whole series was a tribute to the late, legendary editor Julius Schwartz, who used to come up with incredibly imaginative cover images to give to his writers to offer them story ideas. Starting with his image—The Atome tied to a handgrenade, Hawkman battlin a winged gorilla—they'd make up a story to go along with it. The results tended to be pretty delightful, and for this series, DC had artists like Brian Bolland, Adam Hughes and Alex Ross cover old Shwartz concept covers, and then two all-star creative teams per special would create stories in this manner.

I can kind of understand why DC hasn't trade-collected it, as it's very much a project that appeals to fans of Schwartz's, whether they knew they were his fans or not, and thus was more likely to appeal to comic shop-haunters than the still blossoming bookstore market.

But I think that's probably changed since 2004, just seeing how many obscure comic strips and books are collected and sold in bookstores these days. And with the Showcase Presents trades making new DC Silver Age fans, I bet a trade of these one-shots would move.

I'm pretty sure that any graphic novel with the words Moore, Morrison, Johns, Loeb, Waid and Busiek somewhere on the cover (let alone a top a stack of fan-favorite names) would sell pretty damn well. And readers who weren't Schwartz fans before reading the book probably would be by the time its over.

Anyway, what the hell was I talking about? Oh yeah, Norm Breyfogle drew one of the stories in the Green Lantern issue. And it was awesome.

RELATED: Ever wonder what the rest of the Justice League thinks of Hal Jordan? This page from the same story offers the not-too-surprising answer... 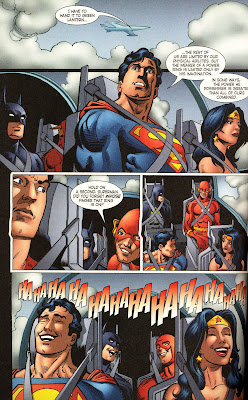 Ha ha! Oh Hal, you big dumb violent lovable stupid dumb jerk who's not very bright—what are we going to do with you?

And that's not the best part of the story either. The Aquaman and Batman disses are even better.
Posted by Caleb at 2:18 PM

Some master detective Batman is. Did he even notice there might be something suspicious about the large, ugly, hairy woman buying the power ring?

A bit of Columbus-related Schwartz trivia for you: Julius Schwartz's granddaughter lives here. She's an office manager for a photography studio in Grandview. (The things you find out while making small talk and choosing prints, eh?)

Norm Breyfogle is my favorite artist, but i wouldn't want to see him drawing JLA because then i would have to buy JLA, and i hate JLA.

Not to mention you will never see Breyfogle working at DC Comics again because he was blacklisted by i believe Paul Levitz.

My personal vote would be for Kevin Maguire. Wouldn't that be delicious?

I do love Hal...but there is no denying that he can be quite the twit occasionally. That last panel of the four of them laughing is SO true.

Breyfogle's okay, but his work is kind of vanilla. Maybe it's due to the inker, but it just lacks punch and definition.

Breyfogle should be drawing *something*. That guy rocks.

He's kind of an odd duck, though. He's partly realistic, partly stylized/dynamic. I'm working on a theory that Breyfogle is the missing link between Neal Adams and Jim Lee.

norm breyfogle would be my choice...i loved that 2004 dc comics presents green lantern story...hella funny. one of the best parts was when they forgot to pick up aquaman.

I like Breyfogle fine, but what's up with Flash's eyes in that last page (the panel where he speaks)? They're in completely different positions on his head.

Hey, I live in Grandview!


I like Breyfogle fine, but what's up with Flash's eyes in that last page (the panel where he speaks)? They're in completely different positions on his head.

If Breyfogle passed out No-Prizes—Norm-Prizes?—I'd say that a side effect of Flash's super-speed is that it's constantly mutating him from the neck up. That would explain why his head looked freaking gigantic throughout much of the Silver Age.

Apparently the scan has a wrinkle/flaw in it, crossing the entire page from left to right, which warps not only the Flash's face, but the panel borders/gutters and all the seats in the invisible plane, too. It's only an error in this scan; the orignal art and the printed comic don't exhibit this flaw.

I'm a BIG fan of Breyfogle's JLA, I've here some other examples of him drawing the DCU:

Tus piece was illustrated to be part of a (rejected) pitch by Steve Englehart & Norm Breyfogle
to DC, for a project featuring Englehart's COYOTE character.

Norm have told me there might be another piece from the
presentation, which he'd probably sold a while ago.

If anyone has ever bumped into the other COYOTE piece by Breyfogle,

could you please describe it to me ? or even help me locate it ?

Any info regarding that work would be welcome.

Many thanks,
Gal Schwartz