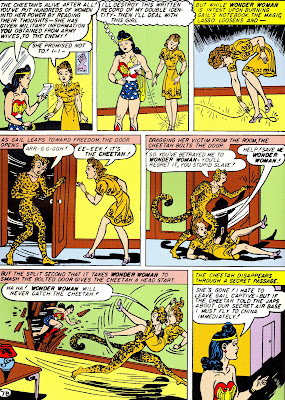 Apparently, Wonder Woman herself must have put in a good word for Gail with her bosses at DC Comics.

She probably felt like she owed Gail after that one time in 1943 when the young writer betrayed her boss The Cheetah to the Amazon heroine, and then Wonder Woman neglected to rescue Gail until after she dealt with the Japanese military.
Posted by Caleb at 6:03 PM

Secret passage?? I can see it right there! Just bust through another door Wonder Woman! Jeez!