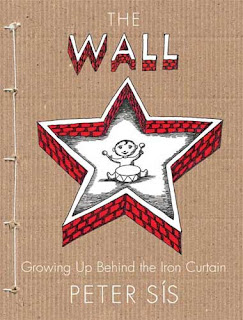 The Wall: Growing Up Behind the Iron Curtain (Farrar, Straus and Giroux ), by Peter Sís


Why’d I wait?: I wasn’t even aware of this book’s existence when it was released last August.

Why now?: I saw it on that Young Adult Library Services Association list that I apparently can’t shut up about, which made me curious. I see it was also mentioned more recently as a Caldecott Honor book. I’m not exactly sure what that means—is it like, a runner-up?—but I’m pretty sure it’s a pretty desirable honor.


Well?: This is a rather difficult book to talk about critically, for a couple of reasons.

First, its form is highly unusual, in the “Is this a graphic novel or not?” kind of way. I know I, and many, many people far, far smarter than I have talked about the inadequacy of the term “graphic novel,” and this is an instance in which it really doesn’t seem quite right. In The Wall’s dimensions, it really seems more like a children’s picture book, all that it is much more complex than a lot of picture books. But it’s only 56 pages long—can you really consider it a novel of any kind, graphic or otherwise?

Additionally, there are several different types of narrative going on, with the words and the pictures not quite interacting the way they normally do in what we consider comics or graphic novels. On a few occasions, the pictures completely give way to text of a sort.

So I don’t know; maybe it’s a hybrid graphic mini-memoir?

This brings me to the second part of what makes it difficult to talk about. I don’t think it is a very good comic. Or, if it’s not comics, I don’t think it’s a particularly good picture book for older kids, or whatever you want to call it.

And by “not very good,” I simply mean it doesn’t seem to work on every page. Yet it is a beautiful book—well designed, imaginatively drawn—and I learned a lot from it. Which is what makes it kind of difficult to criticize—I really liked it, but I didn’t think it was very good, if that makes any sense at all.

Here, let me show you what I’m talking about: 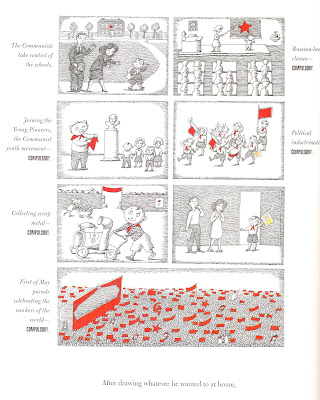 This is a typical page of the book. There’s a grid full of panels, and the flow sequentially into one another—if you removed all the words, these images would still tell a somewhat vague but linear and legible story all by themselves. However, there’s prose along the bottom of the page, a phrase or sentence per page. Meanwhile, another thread of verbal information can be read top to bottom on either side of the panels. All in all then, there are at least three different sources of information, each to be read in a different direction and different manner. And keep in mind this is just one page; if the book were actually open in front of you, this would be the page on the right-hand side, on the left hand side would be a page laid out the exact same, with the second half of the sentence beginning at the bottom of this page over there.

It makes for a rather unusual, and sometimes kind of frustrating read.

These would occasionally give way to two-page spreads, of single images (“splash pages” in the funnybook vernacular, I guess), and other spreads that are nothing but prose (with smaller images framing them).

These are marked “From my journals,” and will list particular years, with a sentence or four about what was going on in Sís’ life and in his country at the time.

And it’s a hell of a life’s story. Sís was born in Czechoslovakia during and grew up through the Cold War; his life’s story roughly coincides with the story of the Eastern Europe’s time behind the Iron Curtain.

The writing is elegantly simple; Sís talks directly to the reader as if they’ve never heard of the Cold War—and I imagine some of them haven’t—but he never seems to be talking down to his audience. It’s a kids’ book that doesn’t insult one’s intelligence, and considering some of the very difficult topics he covers, that’s quite an achievement.

It’s a great example of the universality of the personal, as this is essentially his own story, and his struggles with his interest in art, something that was more often than not at odds with Soviet rule.

I can’t really say anything about the art that you can’t see for yourself by clicking on the image above. Sís’ designs are lovely, and rather simple, although the number of lines and complex shading and image constructions he embeds them in are bewilderingly sophisticated.

There’s a base palette of airy black and white, punctuated with a lot of Soviet and communist red, with other colors standing in for the world beyond the state’s control. In the image above, for example, not the yellow and blues in little Sís’ drawings, and how it stands out on the rest of the page.

Here’s a detail from one of the splash pages, this one focusing on the Prague Spring of 1968, when Western cultural influences were pouring into the country, which was heavily flirting with opening up—at least until Soviet tanks rolled in. 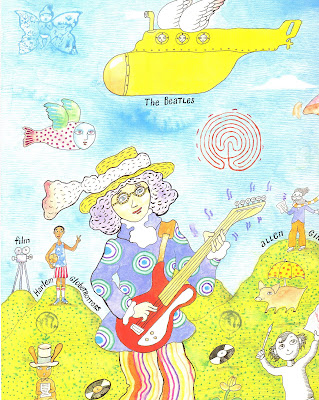 That little square is about two-thirds of half of the image (the splashes are way too big for the scanner); note the little black and white Sís running joyfully through the color landscape.

Here’s half of a spread which is one of the more comic book-y sequences. Across the bottom of the pages are the word, “Everyone wanted to draw. They painted a wall filled with their dreams…and repainted it again and again.” 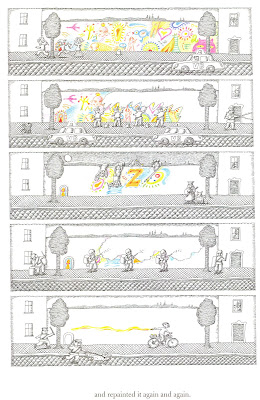 The images are two columns of stacks of five panels, in which the Czech youth surreptitiously paint a wall, the pig-nosed Communist police paint it white, and the kids re-paint it.

While those confusingly arranged pages, the splashes and the journal entries account for most of the page count, there are several other pages that break that pattern, often quite beautiful images, like a map of the city accommodating Soviet tanks, or the spirit of ’68 winding in a huge spiral, and, at the end, a huge brick wall being chiseled away by tiny little figures with pickaxes and flags, symbolizing the end of the Cold War.

It’s a really lovely book; even the cover design, which makes it look like Sís personally made the thing out of corrugated cardboard and string, and hand-drew the title and cover image right on it.

The only way it could be a cooler design would be if he actually did hand-make every copy of this book in exactly that manner.

Would I travel back in time to buy it off the shelf the week of release?: Nah. It’s a great book to read and/or look at, but it’s not one that I feel a need to own. I don’t know that I can recommend everybody run out and buy a copy of their own a $18 a pop, particularly given the occasionally over-complicated and counter-intuitive storytelling on so many of the pages, but it’s definitely worth borrowing form the library.

Anything else?: Yeah, I was amused to see one of the characters who appeared in the first two-page spread. The image was of a young black-and-white Sís in his red Young Pioneers kerchief walking down the street, with a gigantic thought cloud representing his imagination looming above him. Within it is a giant figure of Stalin emerging from a Kremlin, with Lenin, Khruschev and Brezhnez before him. Flying through the sky are planes and missiles, a rocket labeled “Gagarin” and, of course: 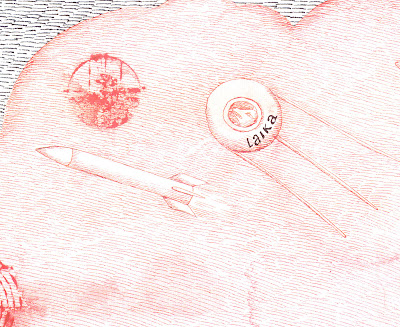 Man, between this and Nick Abadzis’ Laika, 2007 was a great year for the first earthling in space, huh?

Sís mentions the heroic canine cosmonaut twice in the first of his journal entry spreads, as well: