Eleven Things You Can Learn From Tales of The New Gods 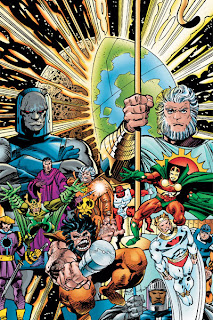 The recently released Tales of The New Gods trade paperback is a pretty well-timed collection of short stories dealing with the characters created during Jack Kirby's late-seventies experiments with pop mythology for DC Comics.

With Death of the New Gods putting the characters front and center in the current DCU line, and that big, gorgeous, multi-volume Kirby omnibus project making sure the original stories are readily available, the New Gods iron is probably as hot as it's ever going to get.

Tales of the New Gods consists almost exclusively of short stories highlighing different characters and different eras of their fictional histories by different creators. Most of the stories are either written and drawn by John Byrne or written and drawn by Walt Simonson, as the bulk of the material comes from bits and pieces of Byrne's Jack Kirby's Fourth World and Simonson's Orion, but there's a real who's who of talent involved.

The list of those providing art is as varied as Erik Larsen, Arthur Adams, Howard Chaykin, Dave Gibbons and John Paul Leon. There are some real "gets" in terms of creators, like a short Frank Miller-illustrated piece, and a never before published story featuring Darkseid and his court written by Mark Millar (presumably from back in the day when he was doing whatever DC work he could get) and drawn by Steve freaking Ditko.

I was actually a little surprised there wasn't more in it, as it doesn't really strive to be a complete collection of short-pieces featuring the Fourth World characters. For example, I remember there being a tale of the young (and suprisingly hot) Granny Goodenss meeting Darkseid for the first time in a Secret Origins 80-Page Giant*, and if I were putting the thing together, I would have been sure to include the few pages of "Lost Pages" from Grant Morrison's JLA that appeared in 1998's New Gods Secret Files and Origins #1. Not because it was any good at all—it's just a couple of pages, and read like a scene cut from a movie to steamline it—but simply to add one more big creator name to the credits.

How worthwhile the reader will find the book will ultimately depend on how interested he or she is in Byrne, Simonson and/or Kirby's Fourth World characters. Personally, I didn't really need to see Darkseid and Desaad as young men, for example, or Mister Miracle and Metron hanging out in the Old West disguised as cowboys. I think the book's major value is in its ability to satiate a reader's curiosity over how well various creators tackle the Kirby characters.

And its educational value, of course. You can learn a lot of things from Tales of The New Gods.

1.) That if anyone could make a Mister Miracle comic really work, it’s Steve Rude and Mark Evanier. Seriously, Tales of The New Gods is worthwhile for the nice reprint of their 1987 Mister Miracle Special alone.

Check out some of Rude's art from the story: 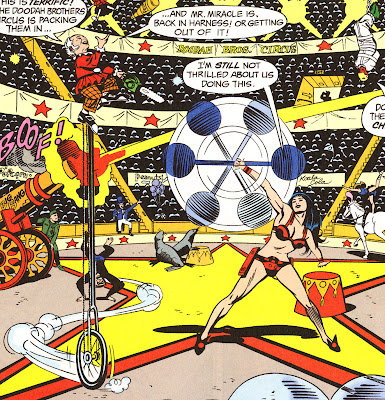 (Above: Big Barda in her action bikiki, plus Oberon and Scott performing at the circus. Quick rule of thumb: Rude + the circus = awesome) 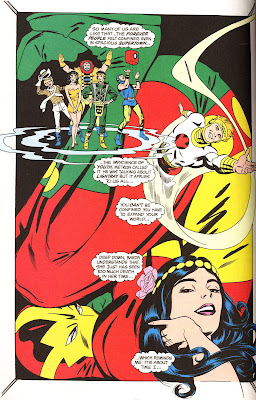 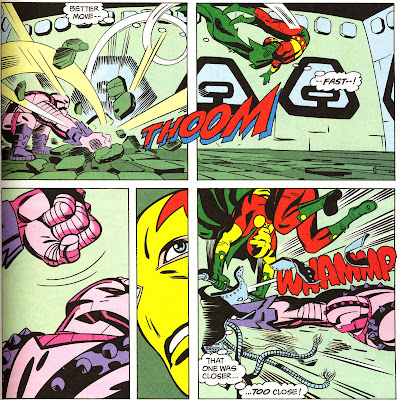 (Mister Miracle vs. a robot in a trap-filled funhouse erected by Granny Goodness and Darkseid)

2.) Mister Miracle had a previous wife, who had the unlikely name of Fancy Goodbody. And, despite her funny name, she was from England, not Planet Kirby

3.) That John Workman really is the greatest letterer

4.) How much sillier Darkseid’s outfit looks when, instead of a big, gray, craggy-faced, rock-looking guy, there’s a normal, human-looking dude in it:

5.) Why Kanto dresses like someone from a medieval court

6.) The secret origin of Kanto’s moustache. Come on, you know you've always wondered.

7.) How long the Forever People have been wearing those particular outfits

8.) Just how bad a combination of John Byrne art and computer-generated graphics can look: 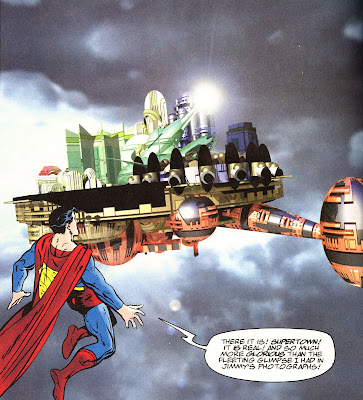 9.) That the whole evolution of Frank Miller’s art style seems to have been in service to drawing the most perfect Darkseid visage of them all: 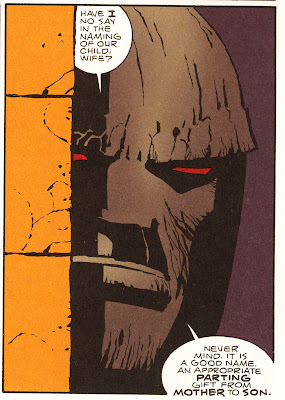 11.) If the Jeph Loeb and Rob Liefeld team can do Kirby’s creations any justice. Here's a hint: 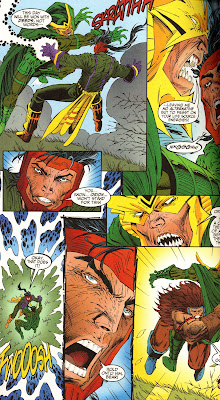 *Update: I have it on reliable authority that the Granny Goodness story from that comic, "Goodness and Mercy" by Simonson, Jon Bogdanove and Bill Reinhold, was reprinted in the trade collection of Simonson's Orion, which may explain why it wasn't re-reprinted here, despite it fitting in so well with the contents of this collection.
Posted by Caleb at 6:25 PM

Jeph Loeb AND Rob Liefeld? No way! If such an encounter of pure wits and talent happened, it would generate a black hole that would suck the entire known universe.

The operative word here is suck

Is that where the finale to ONSLAUGHT REBORN wound up? In a black hole of suck?

I want that book just for the sake of Evanier and Rude's Mister Miracle Special. Rude + anything = awesome. Circuses are just particularly awesome.