Monthly-ish Manga Reviews, or, Damn you Tsugumi Ohba and Takeshi Obata, you evil, evil jerks I hate you so much I could just ghaahh!!!!!1!! 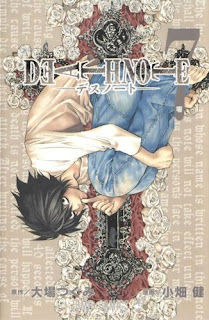 A while back I decided once a month I’d post a round-up of reviews of all the manga I read during that past month, either links to books I reviewed elsewhere, or brief, rambling reviews original to EDILW. And then, after making that decision, I promptly proceeded to read less and less manga (Even at the wonderfully affordable popular $9.99 price point, those digests are expensive, and review copies seem to few and far between for stingy readers/reviewers like me).

So, it’s the first of a new month, and a good time to post reviews of all the manga from the previous month. Except I didn’t really read any manga in February, save one particular series.

As I mentioned in the early February post about super-popular comics I took my sweet time finally getting around to reading, I was kind of luke warm on Death Note up until the very end of the first volume, at which point I was rather curious about what happened next.

And then I checked out the second volume, and that mild curiosity turned into something more urgent. Holy crap, was this story exciting all of a sudden! Once “L” fully enters the series, and the crazy intense high-stakes game of cat and mouse between he and Light develops in earnest, the story got about as thrilling as any comic I’d ever read, and Ohba and Obata just kept upping the stakes, getting L and Light closer and closer, until they are literally spending all of their time in one another’s faces.

Things seemed to stumble a bit once the first two Kiras lost their memories, which seemed like a bit of a cheat (both on the part of the creators and on the part of Light) since the potential memory-loss wasn’t laid out to the same degree as the other “rules” of the Death Notes in the earlier volumes. I was even a little disappointed in the introduction of the third Kira at first too, since it distracted from the Light vs. L fight, but the longer that plot progressed, the more clear it became that it was actually central to their duel, and the conclusion of volume 6 was seriously intense. I kept catching myself sitting up and getting more and more anxious as the protagonists closed in on the third Kira.

And then, about half way through volume 7, The Event happened, and I could not actually believe it actually happened. Years of reading superhero comics have made me somewhat suspicious of such events, but the weird shift in time did make The Event seem pretty final.

And, man, it just sucked all the adrenaline out of the story. I can’t remember the last time I was so bummed about the fate of a fictional character, and I caught myself being a bit angry at Ohba and Obata for doing that to me—which is a good thing, for creators to get a reader that invested in a story that you can be that pissed off at them doing what they did. Damn them.

On the downside, at the close of Volume 7, I’m kinda back where I was at the end of Volume 1. I’m curious about where the story ends up, but the urgency of the narrative seems to have drained out of it, and it’ shard to believe there are five more whole volumes to go, despite the fact that what has so long been the central conflict has been so altered.

So goddam you Tsugumi Ohba and Takeshi Obata. Damn you for creating such an awesome fucking series and making me like it as much as you did, and then doing what you’ve done. I hate you both. And look forward to reading the rest of the series. And your other work. Jerks.
Posted by Caleb at 6:55 PM

I totally told you so, Caleb. Yep, I'm the guy who recommended you keep reading the series up to volume 7.

And really, don't bother finishing it. While volume 12 is okay on its own terms, the series nosedives from 8 and on. It should've ended at 7. They could've just said "what happened happened, and the world was like this and make up your own aftermath."

I think the series should have ended very quickly after "The Event". The trouble isn't that what happened happened (because what happened was very cool indeed), it was that the writer didn't know when to stop.

Oh, whoops. I didn't notice someone else had already said the same thing. I agree with him, then.

I'd also say that you should skip the rest of the series as it's not good. Take all of the no good parts of the first seven books (and there are many) and imagine them over five more books. And the writer has serious, embarrassing issues with women.

On the other hand, you can get them all at the Whetstone library for free, and you can do much worse in free comics.

Have you read Yotsuba yet? Insanely charming.

I have been getting them from the library, so I feel okay about soldiering on. Near and Mello are growing on me. And yeah, I've read Yotsuba. It rules.

Near and Mellow are ANNOYING. Nowhere as cool as the character(s) they came in to replace.