Why isn't there an Invasion! trade yet? 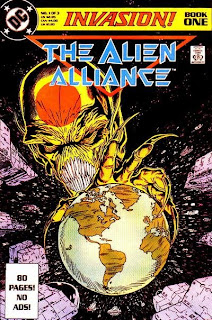 DC owns the publishing rights to thousands of comic book stories in a staggering number of genres from as far back as the late 1930's, so the decision of what to collect and re-release is probably a pretty complicated one, governed in a large part by the formats the company is comfortable with and their understanding of what their markets will support.

I can understand that some of these decisions might be difficult, and the company wanting to take as few risks as possible. One thing I don’t understand, however, is why in God’s name 1988 crossover event series Invasion! isn’t available in trade.

The main part of the story was told in three 80-page, ad-free issues (that’s 240 pages right there!), though it also stretched out into plenty of ancillary tie-ins, some of which were completely unimportant, others of which were fairly integral (And at least one of which has already been collected, in Vertigo's Animal Man trade series).

The size of the thing might be one of the factors making a collection difficult—Armageddon 2001, Eclispo: The Darkness Within, War of the Gods and Millennium aren’t available in trade either—and putting a book together would likely mean making some decisions regarding what tie-ins to include and which to axe, and if they should include just pats of certain books (a la the DC One Million trade).

Perhaps it’s also that the series no longer seems relevant. Like all of DC’s big event series, it was used to lay the groundwork for future series and new directions for oler titles, and I don’t think any of these directions are at all still in play in the modern DCU (Although I guess it does explain why Black Lightning, Fire and other characters now have powers they didn't have before Invasion!).

The series did, however, if not create many of the most prominent of DC’s outer space alien races, then at least popularize them—races like The Dominators and The Khunds, for example, have been appearing pretty regularly in DC comics ever since Invasion!. 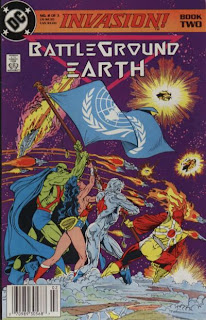 But what really surprises me in terms of this book not being collected is who was responsible for making it. The book was plotted and laid out by Keith Giffen, a creator whose star has risen and fallen a few times in the years since, but seems to be on the ascent at the moment (A space story from someone so heavily involved in the modestly successful Annihilation books for Marvel ought to get some newer readers to give it a look, right? Particularly since you can say “52’s Keith Giffen” in the solicitation copy?) The actual scripting was handled by Bill Mantlo, who knew a thing or two about crazy-ass space stories.

But it’s the artists involved that should have made an Invasion! trade a slam-dunk. Bart Sears penciled the third book and Giffen the second half of the second book, but they’re not the marquee name involved. No, the first half of the story was penciled by none other than Todd McFarlane.

Perhaps you’ve heard of him?

Now I don’t want to go off into a tangent about the quality of McFarlane’s work, in part because I’m hardly an expert. I haven’t seen any new work from him in well over a decade, and didn’t follow any book he did religiously (Maybe the first dozen issues of Spawn, a trade from the library of his Spider-Man, some back issue bin finds of his Infinity Inc. work). In general I like his style and figure work, but have a hard time actually reading books he's drawn and/or written.

Whatever your own thoughts on McFarlane's abilities, I think it's quite safe to say that the work in this book isn’t his best. For an example of the not-so-hotness, take a look at this panel and tell me what you think is happening in it: 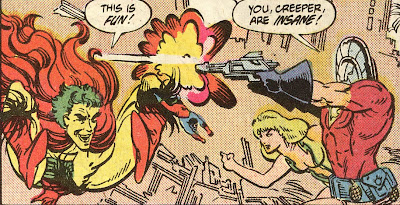 If you said Peacemaker appears to be shooting a flare gun at The Creeper, whose shin The Atom was pretending was a bucking bronco that needed to be broken, then you’d be wrong. But I could see where you’d get that. No, actually those three heroes are actually fighting off an alien invasion. Obviously.

But, his best work or not, DC had some 100 plus pages of one-time super-star artist Todd McFarlane drawing their biggest heroes in an epic story just…sitting there. And they've been sitting there for almost 20 years now.

Once McFarlane hit it big with Spawn, why didn’t DC release an Invasion! trade to capitalize on his fame and gigantic fan base? Or how about when Spawn and Batman met up in those two 1994 Batman/Spawn crossovers? (The DC one drawn by Klaus Janson, and the Image one written by Frank Miller and drawn by McFarlane). Or a few years back when Joe Quesada was publicly calling McFarlane out for never drawing anymore? Or a few years before or after Quesada’s stunt, since new McFarlane art was so hard to find? Or how about, you know, right now, since new McFarlane art is still hard to find, and the guy’s at least popular enough that Spawn is still being published, despite the fact that it hasn’t ever really been any good at all?

I would assume that an Invasion! trade would sell pretty well on the strength of fans of the era (JLI, Suicide Squad, etc.), the other creators involved, and McFarlane’s name, which DC could be sure to highlight on the cover and spine. I mean, the fucking Tangent event is available in trade now; what has that got that Invasion! doesn’t?

Well, since DC stubbornly refuses to reprint Invasion!, for any Todd McFarlane fans in the reading audience who may have missed it the first time around (and/or haven’t found it in the dollar bins like yours truly), here’s late-80’s McFarlane’s versions of some of DC’s biggest heroes... 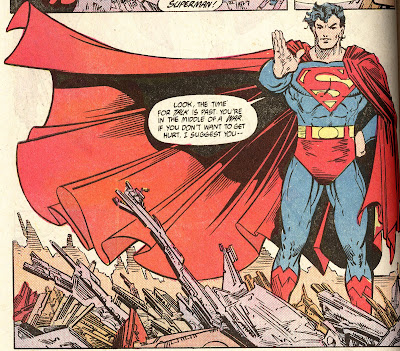 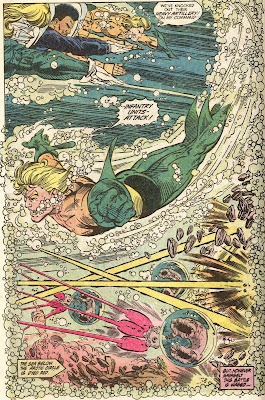 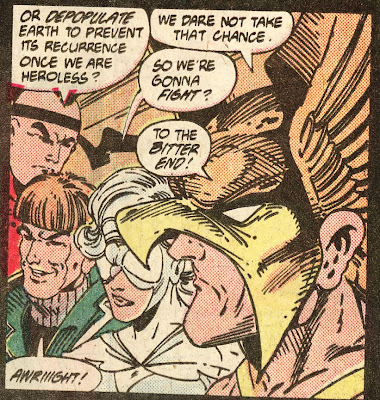 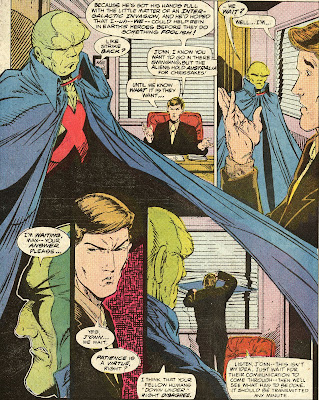 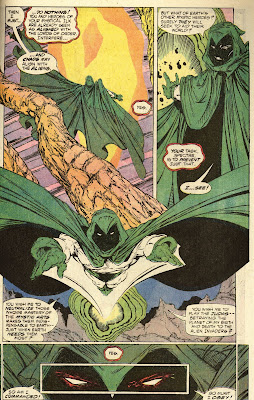 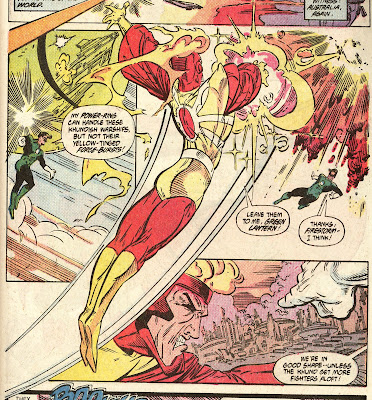 While McFarlane seemed to do okay with the characters who had giant-ass capes, cool-looking masks, or intersting means of locomotion—all of which his brand of expressionism could latch on to, he clearly had a little trouble with some of the other DC characters, particularly these poor bastards... 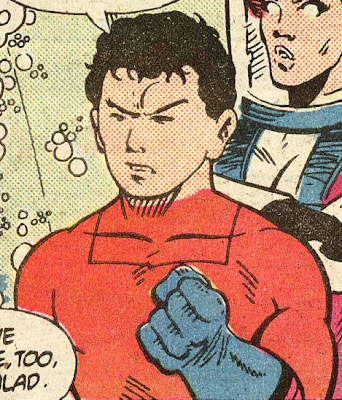 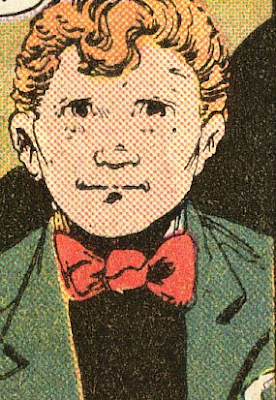 I guess Countdown isn't the home of the worst drawing of Jimmy Olsen ever after all...
Posted by Caleb at 4:37 PM

If I had to guess as to why Invasion! isn't in trade, I'd say it's because the series is uninspired and kind of boring. There are some good concepts in there (although I would argue that the blatently-stolen-from-Marvel-20-years-too-late Metagene isn't one of them), but on the whole, it's mostly unmemorable. And the stuff you do remember is not because it's any good.

The entire first issue doesn't feature any heroes except for the filler-tastic Omega Men, and the third issue tries to make a Big Moment out of the death of one of those kids from the pre-Morrison late-80s Doom Patrol.

Oh, I just disagree...different strokes, and all, but I thought the story was fantastic. Now, with me, it was actually the story that got me into DC Comics (yes, the Mega-Crossover actually did its job!) It was such a huge comic that my parents thought it would shut me up for awhile. I was not happy...Marvel Zombie all the way.

Well, Invasion changed that. Over time I bought all the crossovers and I really thought it meshed well. It's definitely one I pull out of the longboxes every once in a while.

Man, as I kid I read those 3 issues over and over. I didn't buy them - inherited them sometime in the late 80s/early 90s. I didn't even know who half the characters were, but I really enjoyed it.

I think my favorite ended up being Tasmanian Devil - who gets his tail kicked by the aliens who land in Australia.

I think I was away from comics at the time of Invasion, so I can't speak from my memories. Given these panels though, I didn't miss any great art. Look, it's Bat-Spawn! "Hmmm, how can I draw a grimace on Hawkman with this mask on? I know, I'll just move the beak up here..yeah,that's better."
Hey, Firestorm rearranged his chin so he can grimace more!
Bleah.

Whoa, the style of that MacFarlane Superman looks a bit like something '80s Frank Miller might draw. I mean that in a good way.

I loved Invasion when I was in 8th grade -- in fact, my homemade character Spatula Man crossed over with Invasion.

I don't know how good it is, but I'd buy a copy of the trade for nostalgia if nothing else.

Except for the Creeper and Firestorm, it looks like McFarlane might also be one of those guys who goes out of his way to avoid drawing feet.

But what ever happened to the Gil'Dishpan or whatever those creepy tubers were named?
I was hoping to see one of em at least show up in the Sinestro Corps.

I missed the story. I was out of comics buy when an old friend moved back and was raving about the new (Will Payton) Starman. I'd love to have read it and would snap up the trade. :)

Oh, I thought Invasion was great! I think I had just about every hero title on my pull list at the time, so it was fun to see the story play out to different degrees in various titles across the line. I've always been a sucker for the planetary invasion story, and DC sort of made it work.

That said, perhaps the first Two Acts were the best, with the metagene business in Act Three a little over the top...but it certainly populated that singular Earth with a great many new heroes and villians.

They should re-edit it, though, to weave in the highlights of the story that appeared in other books, sort of an expanded dance remix Invasion.

But yes, this, and the Wonder-Woman-in-Space epic should be put into trade right away!!