A strong candidate for next year's "Best Of 2008" lists: The Last Musketeer 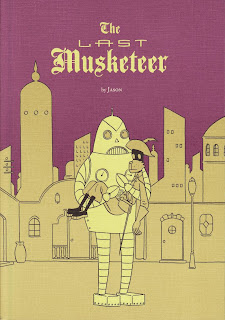 If you've read any one of one-name Norweigian wunderkind Jason's books, then you've probably already got a pretty good idea how good a cartoonist he is.

If you've read any two, then you've probably already realized the guy's a straight-up genius when it comes to high-concept, short-form comics, his often expressionless anthropomorphic animal characters wandering through nine-panel grids in stories that the humorous concepts themselves should be more than enough to carry—famous early 20th century writers is a Parisian heist narrative, I Killed Adolf Hitler, silent romance set during a zombiepocalypse, etc.—but he adds new dimensions to these off-kilter pitches with his wry, dry sense of humor and surprisingly affecting melodrama.

His latest, The Last Musketter, is another example of high-concept comic as hight art that reads like a just plain funny funny book.

One might think that the characters from Dumas' oft-adapted adventure novel set in the 17th century would be quite dead of old age by the 20th century, let alone the 21st century. Or, if not dead, then at least doing something different with their lives and, indeed, some of them are. But Athos is still keeping it real, dressing in Musketeer gear, wearing his sword, and waiting to be needed again. His chance finally comes when Martians attack France, and he takes one of their rockets back to Mars, where he battles the skull-faced Martian emperor, woos a green-skinned princess, introduces his cellmate to the joys of smoking cigarettes, and proudly represnets the old Hollywood swashbuckler genre in a symbolic war against the old Hollywood science-fiction genre.

Obviously, it's both a lot of fun to read and quite hilarious, but, once again, it's much deeper than it has any need to be (Isn't Musketeers vs. Martians more than enough fuel to power most comics?), and I was honestly choked up at the end of it.

As great as The Last Musketter was, however, I have to admit—two panels of it just completely freaked me out. 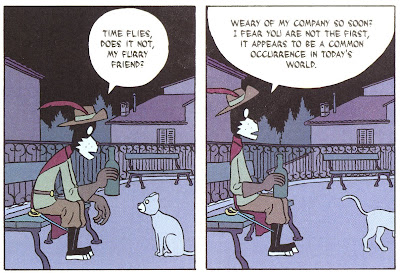 See, Athos himself a housecat or... possibly a dog, or an anthropomorphic animal of some kind, like those animals from 1930s black and white cartoons or a Sega video game character. At any rate, whatever he is exactly, he's some kind of giant, bipedal, talking, clothes-wearing mammal sitting on a bench, and up comes a normal, tiny, walking-on-all-fours, meowing and naked cat. It makes for such a weird conceptual tension that, if I think about it too long, my brain will shut down and I'll faint. It's like whenever Mickey's dog pal Goofy and Mickey's pet dog Pluto are in the same scene at the same time—what goes through Goofy's head when he sees Pluto on all fours, chained to a doghouse, you know? 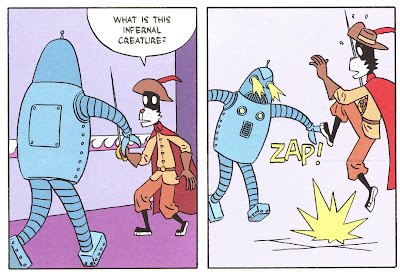 there are scenes of brilliant awkward humor, like this 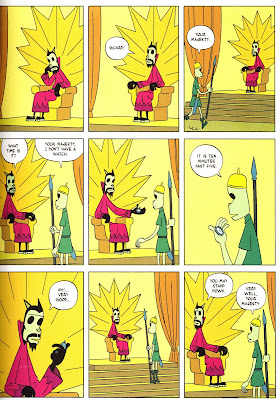 Now if you'll excuse me, I suddenly find myself in the mood for whipped-up fluffy chocolate nougat covered in milk chocolate for some reason...
Posted by Caleb at 6:16 PM

I don't know...ever since THE LEFT BANK GANG, a lot of his books have left me wanting. It wasn't bad at all, though.