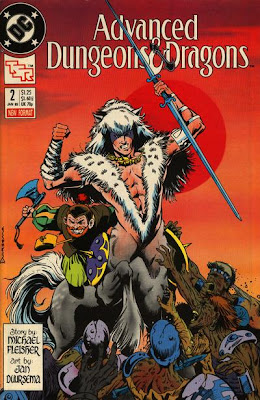 Aside from a few stray issues of Marvel’s G.I. Joe and Transformers purchased from drug store spinner racks as a little kid, this was my first comic book.

I was eleven, going on 12, and was home sick for a while with pneumonia. My mom was buying orange juice and saltines and other sick child supplies, and picked me up something to read—Advanced Dungeons & Dragons #2, as I played the game back then (actually, I spent more time reading the manuals and compendiums and the trashy fantasy novels based on them and Dungeon and Dragon magazines than actually role-playing, as I only had two friends who were at all interested in the game). She may have gotten me a Mad or a Cracked too, that part I don’t recall.

The story was okay, it had something to do with a paladin (a word I always liked saying out loud) who had withered little arms and had become a drunk, an evil sorcerer that looked like a demon, and a buddy-cop type team consisting of a pissed-off dwarf and a gentle centaur with glam eye make up and an ermine stole…vest…thing.

A few months later, I ran across this in a local magazine store, where my dad had stopped to chat with his friend, who ran the place: 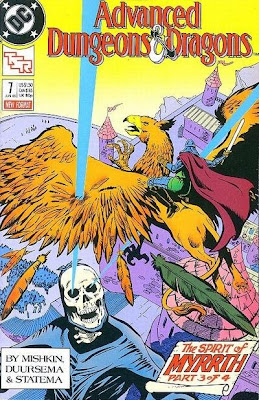 Only five issues had passed, but things were very different. The paladin, who seemed to be the hero of the series, was gone. The blond elfin magic-user was now a brunette. There was a middle-aged thief no one trusted who wasn’t in the earlier issue. Everyone had changed clothes. They were in a different city now. And they were fighting a giant skeleton of a jester.

I was seized with curiosity about what I had missed, how the characters had gotten from that Point A in #2 to such a different Point B by #7. Now I know part of it was that the writer had changed, even though the artist stayed the same (after the first arc, Dan Mishkin would most the series, with Jan Duursema handling the pencils on every issue, save a few by her husband Tom Mandrake). And I also know that the long-since canceled AD&D, part of a short-lived partnership between DC Comics and TSR that resulted in a mini-line of comics based on the role-playing games, was somewhat unlike superhero comics in the way the characters and stories changed. They didn’t have costumes, they didn’t have multi-media franchises built upon them—Mishkin, Duursema and company were free to kill them off, fill-in their back stories, and alter them as they saw fit from story to story.

It was my first experience with comic books as a serial narrative, and my desire to find out what I missed lead me into a comic shop for the first time, to buy back issues. It didn’t take long to get hooked. Those issues of AD&D would feature checklists for other DC books, wherein I could read a sentence or two summary of exciting goings-on involving something called Suicide Squad, Checkmate and a Justice League full of characters that had never been on Superfriends. And then there were, of course, the house ads.

I remember the impression one for the Batman/The New Teen Titans crossover “A Lonely Place of Dying” left on me. That ad featured Nightwing standing atop a building looking pretty angsty, the Bat-signal in the background, and his Robin uniform clutched in one hand. The tease said something like, “In Gotham City, The Batman is giving in to madness and violence. Can Nightwing help? Will he help?”

That too filled me with curiosity, as I felt I had a decent handle on Batman from TV, but I had no idea that Robin had become Nightwing, or that Batman was going crazy. At the time, I thought Nightwing was a villain—based on the name and costume—and thought he was the second Robin, the one I had read about dying in newspapers and magazines.

Between such promotional materials and all the shocking stuff on the shelves of the comic shop—Man, I could barely process what I was looking at when I lifted a copy of Arkham Asylum off a shelf to look at it—more and more allowance went to comics. There was AD&D’s sister title, Forgotten Realms (drawn by Rags Morales); Eastman and Laird’s Teenage Mutant Ninja Turtles, which I was also interested in via role-playing games, as one of my friends and I were really into Teenage Mutant Ninja Turtles and Other Strangeness at the time; then Armageddon 2001, Batman: Year Three, Batman: A Death in the Family, “A Lonely Place of Dying,” The Sandman, Anima, more and more Bat-books, more and more Vertigo, until, eventually, here I am.

I mention this because I’ve been reading, and thus thinking, quite a bit about Gary Gygax these last few days. As one of the creators of Dungeons & Dragons, and the modern role-playing game, Gygax was obviously something of a patron saint of geeks, and its no wonder that his passing has generated the sort of attention it has. I wanted to take a turn to stand up and share some thoughts of my own at this, his Internet wake, in which obituaries and anecdotes ping around cyberspace from various places.

As I mentioned, I played D&D when I was younger, mostly from about 11-14 or so, with a few campaigns for old times sake one summer in my early 20’s. My first exposure was when I was very young, seeing my older cousins, whom I only saw a couple times a year, with their books related to the game. To someone who watched He-Man cartoons and played with Masters of the Universe toys, you can see how the cover paintings of red dragons and swordsman would be fascinating. Then there was the Saturday morning cartoon, in which the kids enter the world of D&D through an amusement park ride (Eric the cavalier was a dick).

I started actually playing it with a friend about the time we stopped playing our early-80’s versions of cops-and-robbers, which was usually more like G.I. Joes-and-Cobras or Ghostbusters-and-ghosts or superheroes-and-robots or whatever. In fact, when we first started playing role-playing, we ignored the math, and would just imagine the fights and stuff, so we kind of transitioned into the formal play of the game from the more chaotic playing of childhood.

There was nothing about the game that didn’t appeal to me. Being the “Dungeon Master” or “Game Master” (depending on the company who published the games we were playing), was pretty much just writing. I spent a lot of time in those days writing scenarios and drawing characters and monsters, with the D&D booklets and magazines sort of guiding me, and good God, did I learn a lot from those things. Most of the mythology and folklore I know, I first encountered in passing in a D&D manual. Long before I had read any Robert E. Howard, or H.P. Lovecraft, or made it more than one-fourth of the way through Fellowship of the Ring (I tried reading that damn book like six times before I finally made it all the way through), I encountered their work in D&D.

I heard of Tiamat and a vorpal blade there years before I’d read any middle-eastern mythology or Lewis Carroll. I learned of fairies’ aversion to iron there before I’d read The Secret Commonwealth, and heard of Tengu, Kappa and Kirin before I’d ever read an Asian fairy tale. And on and on.

I was as interested in monsters and mythology as any little boy, and I’m sure I would have gone on to read about it without ever having rolled a four-sided die just as I’m sure my interest in both writing and art would eventually have lead me to the medium of comics at some point if it weren’t for Dungeons & Dragons, but that was the path I did take, and so I have a lot of fond feelings about the game and the much-maligned culture of it.

I remember when that awful live-action movie came out in 2000, more than one critic took time to note that not only was it a terrible movie, but it seems to be about 20 years too late to capitalize on the strength of its name. More recently, either DC or Marvel (or maybe both) were carrying ads for the game trying to point out its superiority to computer role-playing games, and I remember being struck by how weird and desperate the ad campaign was.

It really does seem like the time for paper, dice and imagination-only role-playing is at an end, but I don’t necessarily think that signals a failure on Gygax’s part, or a weakness in the original concepts. From Magic the Gathering and the card game craze to the entire video game industry to the prevalence of fantasy as a genre in our pop culture, you can trace the success of Dungeons & Dragons not only in how well the game sells or how many people still play it (or will admit to having ever played it), but by how much influence it has had.

Of the various eulogies and obituaries I’ve read this week, I’d recommend Jonathan Rubin’s for Slate as one of the best. In addition to the biographical and business information, he really crystallizes what Gygax and his game did best:


The game's stew of swords, sorcery, and mythological beasts was mostly appropriated from pulp writers and fantasy greats like H.P. Lovecraft and J.R.R. Tolkien. Gygax's skill in integrating fantasies, however, was unparalleled—the world of D&D may have medieval trappings, but its creatures were unbound by time or place. He took monsters from every culture and folklore, from the Greek Pegasus to the Japanese Kirin dragon to the Egyptian sphinx, and made them coexist in a single aggregate world.

It's an aggregate world I spent a lot of time in, and a lifetime exploring all the other worlds that it lead too, which is why, though I never met him and never knew much about him, I'm really glad that Gygax lived, and a little sad to hear that he's died.
Posted by Caleb at 8:09 PM

Labels: ADandD, behind the curtain, duursema

I was sorry to hear about Gygax's passing and it made me a little nostalgic, too. I ended up writing up a short piece on my blog, too. Thanks for this nice entry!

The AD&D comic seemed to constantly be reinventing itself. As I recall, the brunette elf's hair soon turned black with white streaks and was accompanied by another personality rewrite.

I was also saddened to hear of Gary Gygax's passing. I know not everyone is a D&D player, but from the outpouring of emotion on the web, it is obvious he touched a lot of people