I am going to talk a lot about Tubby now

It may have taken me a while to get around to actually trying out the John Stanley and Irving Tripp Little Lulu comics (which Dark Horse has been handily reprinting the hell out of) but man, once I did, I was hooked.

I know I sung their praises a bit in that previous post, but I thought maybe it would be a little more helpful to show how good they are here. So tonight I’d like to take a little time to talk about what exactly it is that makes Stanley and Tripp’s version of Little Lulu so great.

It’s Tubby. Tubby Thompkins. He’s Lulu Moppet’s neighbor and best (boy) friend, a clever little boy who plays at detective, is something of a master of disguise and is a greedy little glutton, which accounts for his…expansive physical appearance, which is made even funnier by his little coat, his tiny little sailor cap and the fact that he is named “Tubby.”

It’s not a nickname—it’s his name. His parents, his friends’ parents, his teachers, his principal, cops, local shopkeepers, they all call him “Tubby.”

Now, not to try and get all deep on you or anything here, but one of the things I like about the Little Lulu-iverse is it’s a fictional world in which there no clear winners and clear losers. Like, Charlie Brown is always getting dumped on; his sad-sack, never-gets-to-kick-a-football, always-loses-his-clothes-on-the-pitcher’s-mound, can’t-fly-a-kite, rejected-by-the-little-red-haired-girl lot in life is his whole deal.

But Tubby, like most of the Little Lulu characters, is neither a winner nor a loser. Sometimes he gets the better of his friends and foes—and everyone in the comic is both Tubby’s friend and his foe, depending on the story and situation—and sometimes they get the better of him. Often times he’ll bust Lulu’s dad Mr. Moppet for some petty domestic crime, getting him in hot water with his wife and daughter, but sometimes Mr. Moppet calls Tubby’s parents to get special permission to spank the little so-and-so.

And then there’s the art. Tripp, who provides the finished art over Stanley’s layouts, is one of those fantastic cartoonists who can do so much with so little. Each panel is full of simple designs, and the characters themselves are but two dots and a dozen lines or so, but they are so vibrant and expressive.

Especially Tubby. Here are some of Tubby’s many moods, as delineated by Tripp… 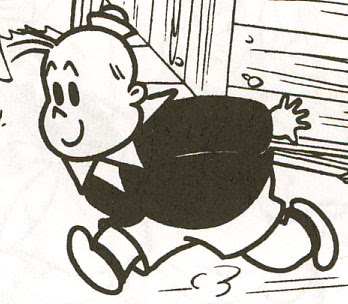 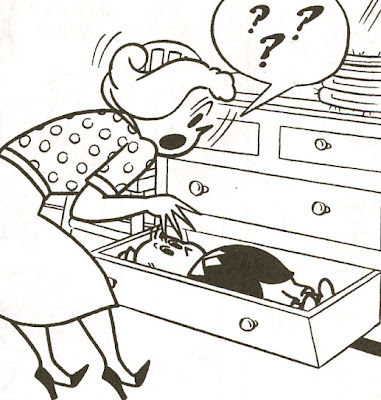 Let's take a look at what you could call a Tubby solo story (True fact: If Lulu wasn't even in Little Lulu, it would still rule). This one appears in Little Lulu Vol. 18: The Expert, the most recent of the Dark Horse trades. 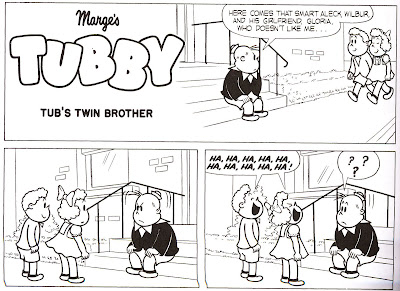 What the hell? Tubby's just sitting on his stoop, (angrily) minding his own business, and Wilbur and Gloria just walk up, look at him, and bust out laughing? Damn, that's weird.

Having enjoyed their context-free laugh at Tubby's expense, the curly-haired couple are off to their next stop, which gives Tub a clue as to why they might have been laughing at him... 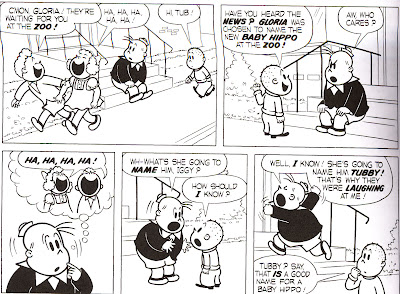 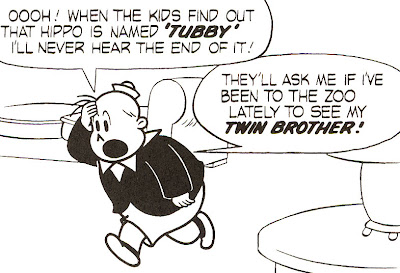 It leaves him with but one recourse:

I love that second panel, in which the tubby kid named Tubby expresses that he never liked the name "Tubby" and never thought it suited him. See, I've wondered just why on earth his parents named him "Tubby"—was he a giant baby or what?—and it's nice to see him thinking about the issue for himself at long last.

Now, I'm not sure why he wants a "fancy" name, particularly that of "Lancelot," but it was the '50s, so maybe boys considered "fancy" to be a good quality in boys' names back then.

Now, the biggest hurdle in changing one's name is in getting everybody who knew you by your old name to quit calling you y it, which is never easy. Tub's first stop is to visit the fellows in his club, whom everyone refers to as the fellers, which I find charming.

Anyway, the respond exactly the way a group of little boys would respond if their portly friend told them he's chaning his name to Lancelot: 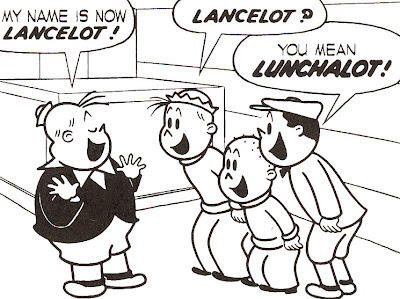 Please note the fits of hysterics this causes among the fellers and, in panel three, Tubby's perfectly cool, zen-like calm in reacting to their jeers... 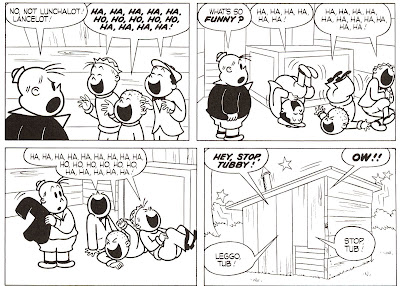 He only relents when they've learned their lesson and start addressing him as Lancelot. However, Annie missed out on the lesson, and has the same reaction as the fellers: 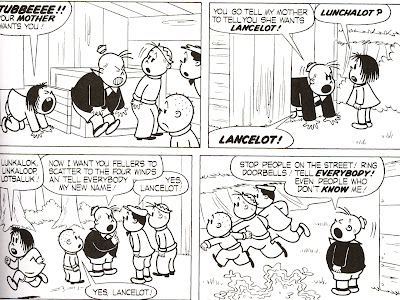 When he finally heads home, he sees the kids have all done his bidding well, even if children struggle with the pronuciation a bit.

Well, regardless, at least everyone knows not to call Tubby "Tubby" any more. I guess he sure showed Gloria and Wilbur, huh? I can't wait until he sees them again. Oh hey, here they come now... 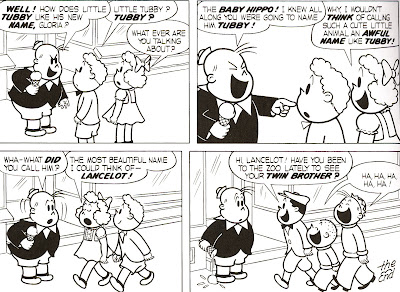 Ha ha! And thus Tubby suffers the very fate he spent the entire story hoping to avoid! And, on top of that, he loses his ice cream.

But the very best part about the ending? It means that the scene at the beginning, in which Wilbur and Gloria just strolled up, regarded Tubby, and pointed and laughted at him...

...they really were just laughing at him for absolutely no reason.
Posted by Caleb at 4:32 PM

I love the look on Tubby's face as he's taking off his jacket. Like he's still pondering why they're laughing even after he's decided to beat the crap out of them.

Little Lulu is really the best.