When Crises only took two issues...

Crisis on Infinite Earths was a 12-issue series. Zero Hour: Crisis in Time was five issues long. Infinite Crisis? Seven issues. Final Crisis? Also slated for seven issues. And, of course, each of those stories had/continue to have/will have several dozen to several 100 tie-in issues, crossovers, prologues, epilogues and so on.

But when Gardner Fox, Godfather of the Multiverse (thank/blame him) wrote a crisis, he did so amazingly efficiently. Why, he could imperil the existence of two universes and resolve the conflict within the space of a single issue of Justice League of America. Two if he was really cooking. Tonight let's take a look at one of those early crises, given the accurate but not terribly exciting sounding title of "Crisis Between Earth-One and Earth-Two!" which ran through 1966's JLoA #46 and #47. It's been reprinted at least two times that I know of, in full re-colored color in Crisis on Multiple Earths Vol. 1 and in black and white in the recent Showcase Presents: Justice League of America Vol. 3.

Here’s the cover of the first issue. 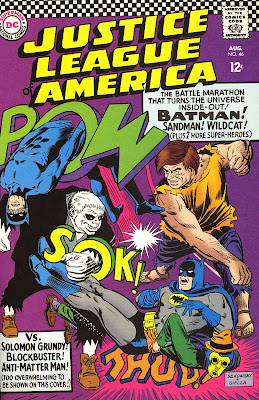 Now, this is a very dangerous cover to think about, at least any more deeply than “Wow, if you hit Batman hard enough, you can actually knock the dignity right out of him,” or “Wouldn’t it be nice if all DC comics continued to have that checker pattern across the top?”

If you think about the interaction of the sound effects and the characters too long, it will set you on the road to madness (I speak from experience). Because the way these characters are interacting with the sound effects challenges what I thought I knew about the way these things are supposed to relate to one another, and if that’s wrong, perhaps everything I think I know is wrong too.

For example, Wildcat is being punched through the O in the POW (Nice aim, by the way, Blockbuster). But what generated the sound POW, calling those big green letters into existence? The sound of Blockbuster’s fist hitting Wildcat’s face. So, if the punch sends Wildcat flying, shouldn’t it appear on the other side of the flying Wildcat? It would emanate from the point of the punch, not a few feet away, right?

The same hold true for the others. The SOK! of Solomon Grundy’s punch doesn’t appear quite as far away as the POW of Blockbuster’s, but his fist goes right through the O, meaning it was called into creation sometime after he punched Batman. Is this a physics thing, having to do with light traveling faster than sound, perhaps?

Finally, most frustratingly, Batman and Sandman fall to the ground, apparently crushing the sound effect THUD! under them. If the THUD! is the sound of them hitting the ground, then how did it get between them and the ground? And, if its merely the sound of Batman falling on top of Sandman, then why is it down there on the ground, beneath them?

See, best not to think about this stuff.

Do pay attention to the lower left hand corner though, wherein we’re told that Anti-Matter Man is “Too overwhelming to be shown on this cover!”

But apparently he’s wasn’t so overwhelming he couldn’t be shown on the very next issue’s cover: 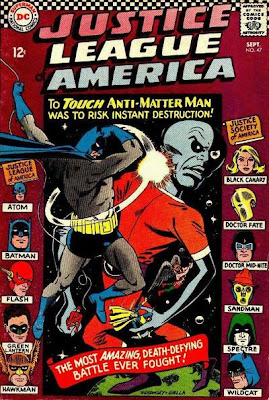 Me, I found myself a little underwhelmed by A-M Man, particularly after that build-up.

Anyway, it’s summer time, and that means its time for a JLA/JSA team-up, probably involving at least two Earths.

Fox and artists Mike Sekowsky and Sid Greene present this nerve-shattering epic (According to the first page; my nerve’s are actually all right at the moment).

We open on the roads of Moro Mountain, and Hawkman (the space-man version with the awesome helmet, so Earth-One, I guess) chasing fur hijackers through the mist, intent on clobbering them with his mace.

The truck disappears, however, replaced by an armored car. So Hawkman clobbers those men with his mace instead. Hawkman’s not picky.

Meanwhile, on Earth-Two, Sandman Wesley Dodds is following a stolen armored car in his Sand-Car (Fox’s term, not mine), when it’s replaced with a hijacked fur truck.

Most of what I know of the original Sandman comes from Matt Wagner and company’s quite excellent Vertigo series Sandman Mystery Theater, so I guess I never realized how stupid the character was, but apparently he fights crime with sand-related gimmicks in the ‘60s?

For example, he throws a handful of sand up in the air, shoots it with “an oddly shaped energy-rod” and it turns into a cement wall. 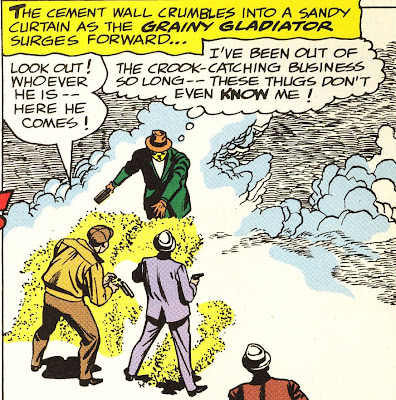 Then he turns that sand into glass handcuffs.

Something even bigger is going on out in outer space. The Spectre finds himself being drawn away by a mysterious force, while…

Hey, check it out. Fox calls swamp monster Grundy “The Macabre Man-Thing.” This is about five eyars before Marvel’s swamp monster Man-Thing would debut in Savage Tales. Just saying.

It’s pretty epic. Grundy is apparently so strong that, when Doc Mid-Nite blasts him with a laser beam, Grundy picks up the laser blast with his bare hands and, like, throws it…? 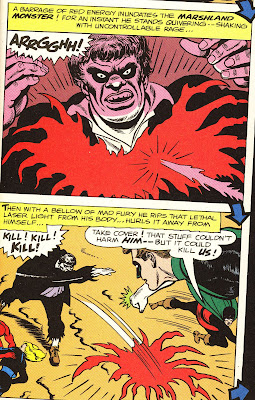 Speaking of destructive man-monsters being transported to alternate earths and going on rampages, Earth-One’s Blockbuser (who looks like a Caucasian Hulk wearing strappy ladies’ shoes) is coincidentally sent to Earth-Two, where I have a feeling he might end up fighting some superheroes too.

Oh yeah, he beats the hell out of Wildcat, Dr. Fate, Sandman and Batman. Sandman tries another stupid sand trick, encasing Blockbuster in block of glass, but he just busts right out.

Those aren’t the only fights raging though! In the strange space between the Earths, The Spectre encounters the gigantic Anti-Matter Man, whose bizarre energy seems to weaken the Disembodied Detective (Hey, it’s better than the Grainy Gladiator).

Unfortunately for the embodiment of God’s vengeance, every time he comes into contact with the Anti-Matter Man, his physical body is warped, leading to his rather hilarious defeat: 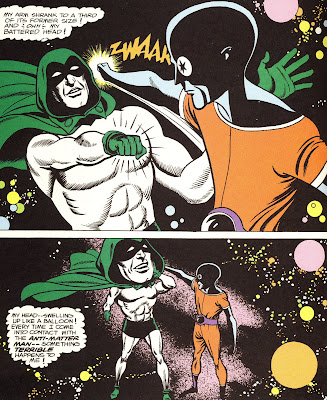 What could be causing all these between-Earth swaps? Perhaps it has something to do with the new space-warping device Ray “The Atom” Palmer’s hot Italian exchange-scientist assistant Enrichetta Negrini is testing.

Perhaps we’ll find out next issue.

Okay, yes. Yes it has something to do with Negrini’s space-warper.

Just as Batman and friends have managed to calm down Blockbuster, the big galoot changes places with Grundy, and the fights on again.

Sandman throws some sand that he changes into cinderblocks (?), but Grundy bats them back at them, so Dr. Fate does the only sensible thing and magics the cinder blocks into custard cream pies (?!), leading to this scene: 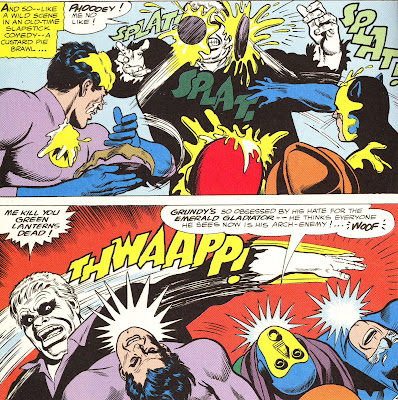 I love Grundy’s smacking all three of them at once there.

While he’s making stooges out of this set of heroes, Blockbuster is beating the holy hell out of the other group, and then Dr. Fate and GL bring everyone out to outer space to fight the Anti-Matter Man. 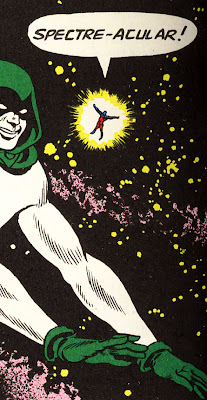 Suffice it to say the good guys win, and the Anti-Matter Man is forced back into his own universe.

And when they come to they… 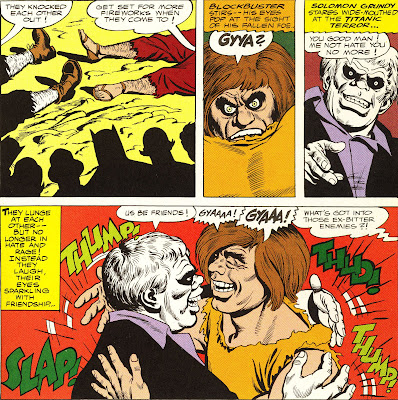 All of which has lead us to what may be my (new) favorite panel in all of Justice League history: 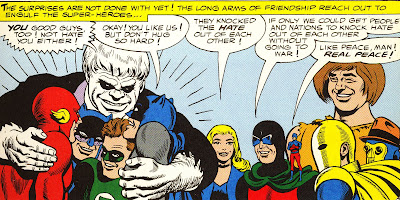 There’s just so much awesome stuff going on for a single panel. 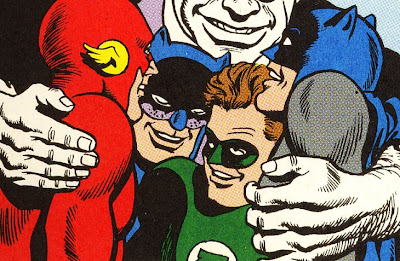 but the dialogue is great too.

“They knocked the hate out of each other!”

“If only we could get people and nations to knock hate out of each other without going to war!”

Yes Dr. Mid-Nite, violence really is the answer! If only people and nations could hit each other instead of resorting to fighting each other, they could resolve all their problems through violent fighting, as opposed to…violent fighting? What are you talking about, Dr. Mid-Nite?!

And then you have square college professor of physics Ray Palmer saying, “Like peace, man! Real peace!”

This was apparently a very influential story on Justice League history, as it established the organizing principle of their next 42 years of adventures: Working for peace by punching people in the face.

You know, once you look for a picture of a Green Lantern’s butt to post, it’s kinda hard not to see Green Lanterns’ butts everywhere. For example, here’s an image from this story, cropped to make Hawkman look even gayer than usual: 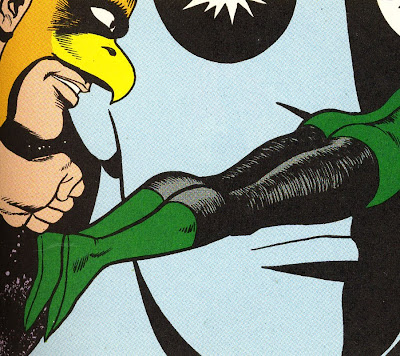 This was fabulous. So...much...action packed into only two issues.

Is it me, or is Wesley Dodds more than a little bit dim? I do have to admit that Batman's poleaxed grin as he's being hugged by Grundy just cracks me up.

And yes, Green Lanterns Butts are everywhere. Once you've noticed them, it's impossible NOT to see them.

I read these in the Greatest JLA Stories paperback and confirmed this was one of the better multiversal episodes. JSA/JLA is always a treat.

I like the fact that even characters, not just the narrator, throw around nicknames like "emerald gladiator."

I'm not sure that knocking the hate right out of each other makes any *less* sense than picking up the laser-splatter off one's chest and throwing it around. Silver Age DC was trippier than it gets credit for.

The Golden Age Sandman switched at some point from just using the sleeping gas to using all kinds of sand gimmicks; Wagner talked about wanting to leave the later stuff intact, but to tell stories from the earlier era. When we saw the aged Wes in places like Starman, he seemed to have had the SMT stage of his career and also the goofier superheroic stage. (Sandy got turned into the goofy sand monster during the latter.)

Art is something that is really completely out of the ordinary for me.. It is the flame that puts out the shame and heartache that my day went through. It is a beautiful thing. Yet at the same time it can mind boggle a soul into thinking something completely different. What I love bout art, is that you envision your own meaning behind the creativity of the art itself. Your imagination can take you many places and only in your imagination can you be in two happy places at once :)
Laser Hair Removal In Chicago