No Sale: War Is Hell 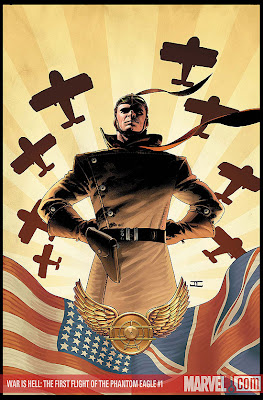 Hey guys, how’s it going? I just wanted to drop you a line to say WHAT THE HELL?! When I went to my local comic shop this week to pick up the new releases that looked good, I couldn’t help but notice that you were charging $3.99 for War Is Hell: The First Flight of The Phantom Eagle #1.

Now, as an English major in college and a “creative type,” math has never really been my strong point, but I know enough of it to know that $3.99 is a whole entire dollar more than $2.99, which is what you guys normally charge for 22-page comic books. If I understand fractions right, that’s a one-third increase over the normal price of your normal 22-page comic books.

I picked up War Is Hell, felt its weight in my hand, and flipped through it, and while I suppose it’s possible that it was printed on an ultra-light paper that deceived me, it sure seemed to be your average 22-page page count. It didn’t even have a cardstock cover like Logan #1, that other comic book you jacked the price up to $3.99 for no reason for. At least in that case, I could assume you were spending more on cover-stock, and felt justified in asking readers to shell out a little bit more.

But why did War Is Hell cost so much? Is red ink more expensive than all the other inks, and thus a scene of a dude falling into a biplane propeller is more expensive to create?

Or is it simply because it is a Max imprint book, meaning there’s probably some swear words that appear in English instead of, like, “@#$%” you Iron Man, you @#$%ing @#$%!” and you want to discourage kids from reading it by making it more expensive?

Because if that’s your rationale, don’t worry. Kids don’t read Marvel Comics. And even if they did, I’m fairly certain their first choice isn’t going to be the one about the obscure World War I flying ace that their dad’s never even heard of drawn by that Chaykin guy who makes all the characters look fat and flat. I would assume they might gravitate towards something with Wolverine on the cover. Or Venom. Or Wolverine possessed by Venom.

Me, on the other the other hand, I’m the goddam target audience for this stuff. Garth Ennis? I love that guy. And everyone knows that other than stories featuring Irish vampire drinking buddies, sarcastic hitmen with x-ray eyes and hearts of gold and insane vigilantes killing mobsters with zoo animals, his very best work is that which involves war.

And I love Howard Chaykin’s art. And cover artist John Cassaday’s. Hell, this book even has my favorite letterer on it.

And having recently made my way through Showcase Presents: Enemy Ace and Ennis’ Enemy Ace: War in Heaven, I’m totally pumped about a WWI pilot story.

But why should I pay an extra dollar for it? Anyway, I guess I’ll just wait for the trade. Again.

I bought this today and actually didn't even notice the price point. You'd think I'd pay attention to something like that. It doesn't matter though, Garth Ennis has definitely reached "buy whatever he writes" status with me. I just hope they don't take advantage and start charging $50 for anything he does.

Punisher's ending soon, I really hope he gets another ongoing with Marvel or DC. The Boys is OK, but give me some Hitman or Punisher.

Huh. I was kinda interested in this one, but bluntly, there is no way the Phantom Eagle is going to be anywhere near as cool as Enemy Ace. Shoot, I think Balloon Buster has more name recognition and cred. Still, the trade would be nice...don't shaft me with a hardcover, Marvel.

Doesn't Marvel usually do that with their MAX books? I remember some grumbling about the "Wisdom" miniseries from last year having a MAX label slapped on it just to add to the price.

I think they do usually up the price of their Max books (the trades too, but I belive it's less in the trades). Most of the Max series I've read usually have the cardstock-type cover though.

I probably would have got it without even noticing if I weren't interested in a few trades this week and had to do the math to make sure I had enough on me.