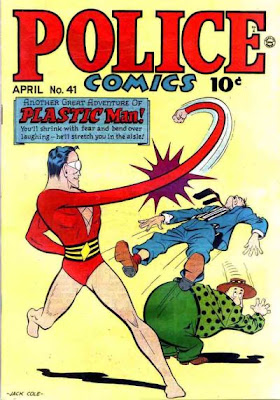 I’ve read repeatedly about Jack Cole’s Golden Age Plastic Man comics, and one fact that comes up in many of the tellings of the character’s real-life origins is that Cole was originally thinking of calling him India Rubber Man or Rubber Man. Police Comics publisher Busy Arnold suggested that instead of rubber, the stretchy, bouncy, shape-changing hero be named after that new miracle substance, plastic.

While Plastic Man remains one of those characters better loved by cartoonists, artists and Golden Age comic book fans rather than the general public, I think it’s fairly safe to say that if he didn’t get the snappier, mid-20th century zeitgeist-grabbing name of Plastic Man, he probably still wouldn’t be around in any form today, and just be one more footnote in Cole’s early comic book career. “India Rubber Man” just doesn’t quite roll of the tongue like “Plastic Man” does, you know?

Cole and Arnold’s foresight to name their character after a futuristic material, to essentially get in on the ground floor of the pop perception of plastic, is often credited with why Plas caught on like he did. Well, that and Cole’s incredible skills, of course.

But if plastic has done a lot for Plastic Man over the years, what’s Plastic Man done for plastic? According to writer Jeffrey Meikle, not much.

“Alternately desired and despised, plastic never enjoyed the near universal acclaim of its upscale cousin nylon,” Meikle wrote. During the ‘40s and into the post-war period, the “cultural perception of plastic remained ambiguous.”

If comic books insisted on presenting plastic as a glorified chewing gum, then the public could be forgiven its uncertainty.


He may have been a hell of a crook-catcher, but as a spokesman for his namesake, Plas was a bust.

There are two other mentions of a “Plastic Man” in Meikle’s book, neither of which refers to the goggled super-hero.

One is from an article by two British chemist entitled, “Life of Plastic Man,” which ran in the December 1941 issues of Science Digest. It describes Plastic Man as a generic example type person, John Doe or Joe Sixpack or Weldon Whatever, “a dweller in the ‘Plastic Age’ already upon us.”

I wonder if Cole or Arnold ever saw that article? The dates of the two publications would indicate that comics’ Plastic Man predated the science journal’s Plastic Man, so perhaps the Brits got the name from the American newsstand instead, but if it’s a coincidence, it’s a rather odd one, isn’t it? At the very least, it demonstrates how on top of things Arnold was when he suggested the name.

I also wonder if Bob Haney ever read that essay, as his 1968 Brave and the Bold #76 featured Plastic Man and Batman teaming up against a villain named The Molder, who spent the whole issue ranting and raving about the “New Age of Plastic” and the “Plastic Age.”

The other Plastic Man to appear in Miekle’s book is artist Les Levine, who was popularly known during the ‘60s as Plastic Man due to his preferred materials. I wonder if there’s a Les Levine in the DCU, and, if so, did that Levine have the same nickname?
Posted by Caleb at 5:26 PM

I've always been partial to The Kinks' Plastic Man, myself.