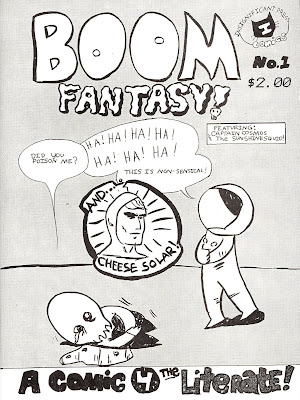 I picked up Phil Skaggs Jr.’s 24-Hour Comic Day comic The Lone (Red) Ranger at SPACE this year, and he’s since sent me a copy of his anthology Boom Fantasy! #1.

While its title is a lot less grabby and a lot more prosaic than The Lone (Red) Ranger, it’s also a superior work.

But then, I guess that’s the predictable result of a creator taking more than 24-hours on a book, isn’t it?

I like Skagg’s stubby, big round headed character designs, and his loose cartooning style. Good looking characters rendered well will make even terrible stories go down pretty easy, so Skaggs has already cleared one major hurdle confronting the would-be cartoonist.

There are three, possibly four stories in here, with that possible fourth being an “Activity Corner” feature.

The first stars Captain Cosmos and The Sunshine Squid; the former is a humanoid astronaut with an opaque visor on his helmet, and the latter seems to be a person with a cephalopod’s head. Or maybe a cephalapod with a person’s body growing out of the bottom of it. They apparently travel spaces in what looks like a ship shaped like a giant bear’s head, complete with a fur covering.

And space-travel is apparently quite boring, as they engage in activities to alleviate their boredom—competing in a Dance Dance Revolution-like video game, making music on the computer, making pie, etc. There’s a charming just-hanging-out feel to the tale and the interactions between the characters, including the ship itself. 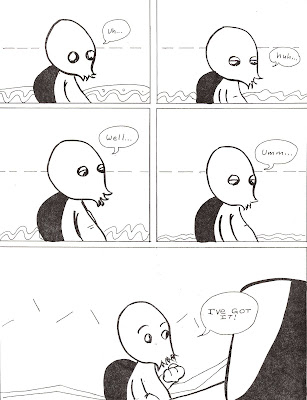 That’s followed by a three-page gag strip starring another space captain (this one named Cheese Solar). A gag that seems familiar. I’m not sure where I’ve seen it before though; maybe something similar happened to me once?

Then there’s a superhero story of sorts featuring Skele-Ted, a hero with a skull for a head who lives in a mountain shaped like a skull. And when he kills the monster he’s fighting, it’s ghost rises, skull-like, out of the dead foe. Another neat character designs, but there’s not much to the story beyond that.

The “Activity Corner” is two pages long; the first page features host Ray-Ray explaining “graphic notation,” and the second page features an example/challenge for musicians. If you’re into music, and have some kinda music-making instrument around your house, you may get something out of this. It seems interesting, but was mostly over my head.

Finally, rounding out the package is a back cover full of little lists and drawings, which reminded me of the zines I used to see in the late ‘90s.

If all that sounds like something you might be down with, check out Skaggs’ online HQ at insignificantpress.com.
Posted by Caleb at 4:51 PM

Labels: octopus from the neck up