Congorilla: Who He Is, And How He Came to Be

During Wizard World LA, DC announced that critically acclaimed writer James Robinson would be writing a second Justice League title called simply Justice League and featuring a rather unusual line-up: Green Lantern Hal Jordan, Green Arrow Oliver Queen, Batwoman, Superman, Whatever They End Up Calling Captain Marvel Jr., a Starman and a character I think it’s fairly safe to say no one would have expected.

In the Newsarama panel coverage, Robinson said that last character was an "old, 90-year-old man named Bill… People are going to love this character by the time I'm done with him.”

The Comicbookresources.com coverage was a little more clear on Bill’s identity, saying Congo Bill, and quoting Robinson as saying, "He's 90 years old. He's seen it all. He's done it all. And within six issues you will love this character. I guarantee it.”

And then in a follow-up interview with Newsarama, it was made crystal clear just who we’re talking about here. Said Robinson:

“This was a character that Dan [DiDio], Eddie [Berganza, editor] and everyone else stopped cold when I suggested him (and Geoff [Johns] was appalled). I didn’t let up, and they and finally said, ‘Okay, we trust you James, if you’re that passionate about the character, then use him.’ And then, after reading the pages devoted to him in the first issue, they’ve all told me that I was able to make them care about him. He’ll be the oldest character in the book – he’s 90 years old, his human body has been destroyed, and he’s trapped in the body of a gigantic, magic, golden gorilla. Congorilla will be on the team.”

This news shook the Internet to its very foundations, with opinion sharply divided. Some fans (the cool ones) responded with a hearty “Woo hoo!” Others (the lame ones) responded with a “Wah, I don’t don’t want silly old characters in my very serious and important stories of children’s characters in tight costumes committing acts of violence against each other and crying about their emotions!” But the overwhelming majority simply thought, “Wait, just who is Congorilla, and how did he come to be?”

Now, I was only negative 19-years-old when 1958’s Action Comics #247 hit newsstands and dime stores, containing within its pulpy pages the first appearance of Congorilla, in a story entitled “The Amazing Congorilla!”

But DC did re-publish that story, along with the origins of five other of their characters, in 2004’s Weird Secret Origins. 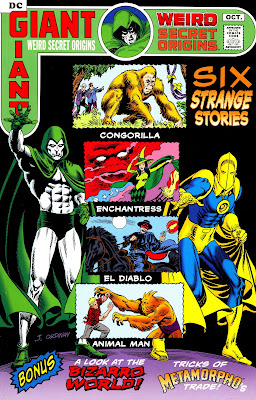 If you see this in a back-issue bin, be sure you snap it up. It cost $5.95 off the new-books rack when I bought it, but it contained six re-colored stories—including the origin of Enchantress back when she was super-cute and the gorgeous Carmine Infantino-drawn origin of Animal Man—plus the origin of Bizarro World and a brief piece on Metamorpho, an original Jerry Ordaway cover and no ads, save for house ads on the back-covers and little ads for Archives where ads originally appeared at the end of most of the stories. (And by the way, the heroes pictured on the cover above? That’d be, like, the greatest Justice League line-up ever, wouldn’t it?)

But back to the subject at hand, “The Amazing Congorilla!” by writer Jack Miller and artist Howard Sherman.

It opens with a splash panel of a golden gorilla trying to start a plane, with a trio of white guys running up behind him, one saying, “Now look at that gorilla! He’s starting our plane! I—It’s incredible! What can a gorilla know about flying?”

There’ s only one way to find out! By reading on!

This story is set in the Congo, “land of superstition and mystery,”where “Congo Bill, famous jungle-hunter” (and star of 1954 series Congo Bill, which featured a golden gorilla in the first issue) is approached by an excitable native, telling him that one of his best friends, medicine man Chief Kawolo has fallen off a cliff and is currently lying on a ledge.

Our dauntless hero rappels down the cliff face against Kawolo’s protests, and carries him back to the village, where he passes on. But not before he bestows upon Bill a great gift: 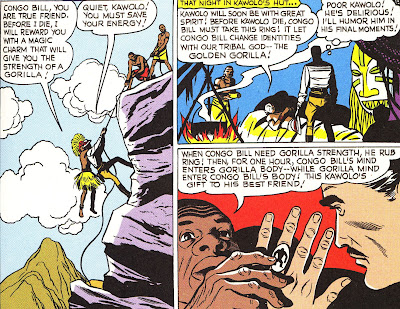 Gorilla strength, huh? What a bunch of hooey! Bill doesn’t buy it, but wears the ring out of sentiment for his friend. Besides, what’s the likelihood that he’d ever need gorilla strength?

Then, two panels and one avalanche later…

Still doubting the magic, but with nothing to lose, Bill rubs the ring and suddenly, Bill finds his mind in the body of the golden gorilla, while the mind of the gorilla enters Bill’s body…! 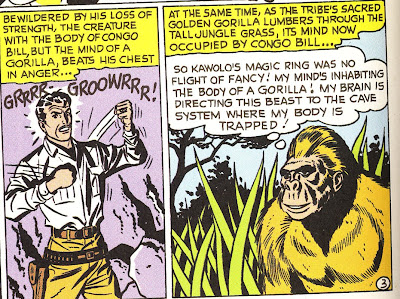 Yes, they switch bodies! So not only can readers thrill to the adventures of a super-heroic gorilla with the thoughts of a man, but there is the endless comedy of seeing a grown man act like a gorilla!

So now Bill-in-the-gorilla must find and rescue the-gorilla-in-Bill from the caved-in cave. Along the way, however, he stumbles across a Hollywood movie company making a weird sci-fi movie about a woman dressed like a witch…and a meteor…and rocketship?

He saves the actress from a leopard, but is rewarded by being captured and caged by the men working on the film. Using his human wiles, he maneuvers his wheeled cage into the line of fire of two real laser tanks with real, working laser guns that are part of the film, blasting away his bars.

From there, it’s a simple matter to start the plane 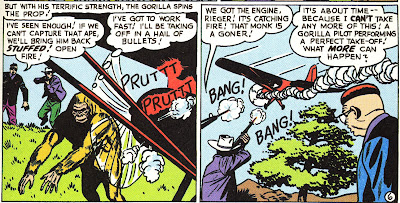 fly it away, parachute to safety—using three chutes—when the plane is shot down, and then lifting the boulders away from the cave entrance, where he’s greeted by the sight of himself, growling like a gorilla.

More recently, there was a 1992 Congorilla miniseries by Steve Englehart and Neil Vokes, and a 1999 Vertigo miniseries called Congo Bill by Scott Cunningham and Daniel Zezelj, the most memorable feature of which was the cover work by Richard Corben.

Gluttons for punishement (with punishment being defined as hearing me drone on about comics), can read my initial reaction to the Robinson book (along with Troy Brownfield’s) here, as part of Shotgunreviews.com’s new Con Job feature. My reservations haven’t changed much since; it sounds like it has the potential to either be a great comic or something of a horrible disaster. Much will ultimately depend on the artist. I really like to see Rags Morales, the guy who shoulda been teamed with Meltzer on the JLoA relaunch, or Robinson’s old Starman collaborator Peter Snejbjerg, but who knows. DC’s given out some plum art assignments to some pretty mystifying choices lately—Benes and Joe Benitez on JLoA, Tony Daniel on Grant Morrison’s Batman, Ian Churchill on the upcoming Titans—so who knows.

Based on the con coverage, it’s apparently going to be a “name” artist that will excite fans, since Robinson was about to mention the artist but was cut off by DiDio, who said they were saving the announcement. I haven’t even got a decent guess.
Posted by Caleb at 2:27 PM

A gorilla-in-man-heaven story is being saved for the annual.

I hope the book's artist isn't Carlos Pacheco - his art is great, but man . . . he's slowwwwwwww. But I don't know what else he's going to be working on in the near future, unless they're really going ahead with that Arrowsmith sequel.

Great Justice League line up on the cover, but not the greatest. Needs more Skeets and Ambush Bug.