Delayed Reaction: Cat Getting Out of a Bag 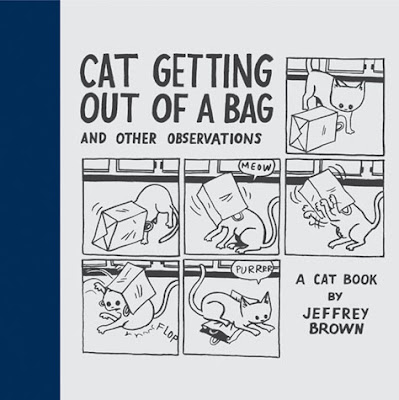 Cat Getting Out of a Bag and Other Observations (Chronicle Books), by Jeffrey Brown

Why’d I wait?:“Wait, $12.95 for a 100-page, hardcover book full of wordless strips about Jeffrey Brown’s cat, plus some splash-page portraits of his cat? That’s not too bad a price for a hardcover, but that just means if this were a softcover it could have been even cheaper. I’d definitely buy this for $10, but $12.95? I don’t know…”


Why now?: “Oh sweet, the library has that Jeffrey Brown cat book I never got around to buying!”


Well?: So, are you a cat person? Because the answer to that question will likely tell you everything you need to know about his book.

Personally, I’m not (Allergic, grew up with dogs and could never quite wrap my head around the litter box concept). I do, however, have friends who have cats, and I’ve spent an awful lot of time with those cats, which gave me the necessary bare minimum amount of cat familiarity I needed to enjoy the book.

The crazy-ass things your cat does, like wiggling its butt before a running pounce, or doing laps around the house for no reason, or going crazy for the plastic rings around milk jugs, or falling off a ledge after having fallen asleep on it are, it turns out, the exact same things Brown’s cat Misty does (and, I imagine, all house cats everywhere).

One of the chief joys of reading the book is seeing these things performed for your enjoyment. The bulk of the little square book are nine-panel, page-long strips involving Misty going about her strange, cat-like business. Brown and/or other characters appear and talk to each other or Misty, but we never see their faces, giving readers a cat’s eye view.

And as common as the cat-behavior is, it’s still mysterious and alien; cat concerns have almost always struck me as trivial, and yet they clearly take this stuff deadly seriously. I have a hard time relating to a lot of what cats do beyond the obvious, and at times it seems to me as if the whole species had some form of OCD.

And it’s this sort of behavior that seems to fuel some of the best strips. For example, in one, 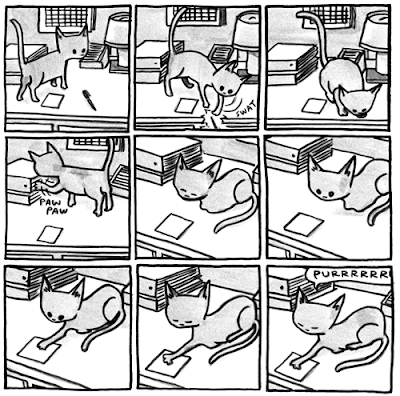 Misty is atop a desk. She swats a pen off of it in one panel, and then, in the next, she looks at its new resting place on the floor. Then she paws at a stack of papers for a panel. Then she goes to sleep. In the next panel, here eyes snap wide open. And then she puts one paw on a piece of paper. And then she closes her eyes, the paw still resting on the piece of paper. In the final panel, she begins purring. Apparently, she had to rearrange herself and the desk just so to reach that perfect, purring state.

Brown draws a wonderfully cute, highly abstracted cat, a cartoon version of a cat obviously refined from a lot of attempts at drawing cats. The panels look like a lot of Brown’s work, but he seems to use a lot more shading and a thicker line throughout. The choreography seems a lot tighter than in his “girlfriend” books too, perhaps due to the fact that the stories he’s telling here are wholly dependent on the actions of the figures, rather than their dialogue.

The one nine-panel strip per page rhythm is broken only rarely. There are three strips on the first page that serve as an introduction, two of which feature the Brown avatar his readers are familiar with from the neck up. The other breaks come from the aforementioned full-page cat portraiture, which sees Brown working in a realistic style, pictures seemingly there just to let cynical readers who hate his style know that he can draw for real too, thank you very much.

While Brown’s working with a bigger publishing outfit than usual here (not to mention one that’s focused on publishing book-books in addition to graphic novels), the production and design don’t really vary from his Top Shelf releases. The lettering of the entire book—the cover, the about the author page, the small print on the title page—is all done in Jeffrey Brown hand-writing style, and the package has the same intimate, one-man show feel of his girlfriend books.

It struck me while reading this that it’s too bad newspapers are so rigid in their strip format these days, as a weekly or daily cat strip by Brown of this sort would no doubt kill a regular newspaper audience. The universality of the subject matter, coupled with the charming way Brown renders it and the endless well of inspiration available to him as a cartoonist (so long as he has a cat to follow around the house) make this not only Brown’s most accessible work, but also seem to indicate it could be one he could do forever and find a market for.

Truly Brown is now the reigning champ of cat-based sequential art humor. Although, to be fair, the competition isn’t exactly stiff.

You can see previews of some of the strips here.


Would I travel back in time to buy it off the shelf the week of release?: Hmm, can I take $12.95 back into the past with me to buy it with?

At the very least, I think this would make a perfect gift for my friends with the cats—in fact, this seems like a good comics evangelism type of book, so long as the recipient is a cat person—and then I could borrow it whenever I wanted to reread it.