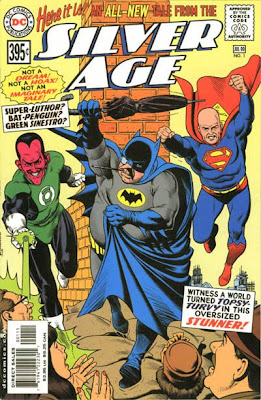 Like Invasion! and the DC Presents Julius Schwartz tribute series, 2000 event miniseries The Silver Age seems like it merits the trade treatment for its creators alone, and that the popularity of those creators would produce the sales needed to justify the effort.

If you missed it, The Silver Age was a millennial series of one-shots set during the titular time frame, featuring the Justice League of America and their many allies—just about every character DC was publishing in the ‘60s, in fact—battling against the menace of The Secret Society of Super-Villains and their alien ally.

Mark Waid, who has an obvious affection for the era, spear-headed the event, writing the opening and closing chapters, with a slew of his friends and colleagues pitching in on scripts and art. Two of them were just starting to make a name for themselves in the industry, but have since become two of its most bankable stars—Mark Millar and Geoff Johns.

In addition to the epic story, which would have run somewhere in the neighborhood of pages, the book had the added thrill of a pretty consistent Silver Age aesthetic, from the logos to house ads to the cover prices listed in cents, and seeing many of the great artists from the period who were still around contributing covers.

Was it a great story? Not especially. It was a lot of fun the first time through, if only to get such an extended look at the post-Crisis Silver Age that Waid himself had just established in JLA: Year One and to see so many interesting talents tackling some fairly rarely seen characters.

The art was a little spotty in terms of style. Every artist involved was a fine draftsman, but some worked in a style that was congruent with that of the Silver Age comics, and other drew it like any other book.

But great or merely serviceable, I think a trade collection would be fairly well received.

And, last but not least, there’s the characters. It stars The Silver Age Justice League (with Black Canary in for Wonder Woman), the original Teen Titans line-up, the GL Corps, the Challengers of the Unknown, Deadman, Batgirl, The Doom Patrol, The Metal Men, Adam Strange, Metamorpho, Blackhawk, Robby Reed (the original holder of the H-Dial) and a cadre of villains that includes Lex Luthor, Sinestro, Dr. Light, Catwoman and Brainiac.

I think it’s safe to say that most of DC’s currents readers are pretty into most of those guys, and the appeal of many of them, particularly in their Silver Age incarnations, have been significantly increased over the course of the last few years thanks to the Showcase Presents trade line.

In fact, a fantastic way to collect the series would be to do so as a Showcase Presents: The Silver Age trade. While there’s not enough material from the series to reach the 500-page mark of the phone book-sized Showcase volumes, even if you include the newly created profiles, Flash facts, Metamorpho and Metal Men science strips and Jimmy Olsen, Wonder Girl and Super Turtle back-ups that filled up the Silver Age Secret Files and Origins #1 and the back half of Silver Age 80-Page Giant #1, it shouldn’t be too hard to find either newer stories similarly set in the Silver Age from all those other 80-Page Giants and Secret Files specials or from actually back in the day.

Anyway, just an idea Mr. Whoever It Is Who Decides What Gets Trade-Collected At DC.


*Or Ms. Whoever It Is Who Decides What Gets Trade-Collected At DC.
Posted by Caleb at 5:57 PM

That sounds pretty enjoyable, actually. I think that happened while I was "away" from comics, so would definitely check out the trade...even though they had, at the time, banished Wonder Woman from the Silver Age.

I bought the whole series for about a quarter a pop, loved them, then lost the batch when my basement flooded. Still sad about not getting that one back, but sooner or later.