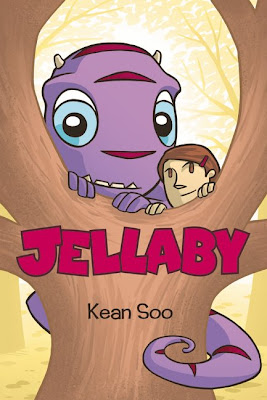 I've read some online invective regarding the Flight anthologies, the sharpest cut I remember being (and I paraphrase, because I don't remember where exactly I read it) that just because you can draw, that doesn't mean you can tell a story. I haven't dug every single story in ever single Flight volume, and yeah, some are even what I'd consider bad stories (although not a one is what I'd call poorly illustrated), but certainly the ratio of great to bad stories inthe accolade-accruing anthologies (alliteration!) has favored the good. One of my personal favorite contributions has been the one in Volume 3 about the big purple dragon monster with the giant head named Jellaby having a tea party with two little kids, by Kean Soo.

Last month, Soo delivered a new Jellaby story, this one much, much longer than his Flight shorts, and devoid of anyone else's work around it. That is, Soo is flying solo with Jellaby (Hyperion), the first in a multi-volume story about the title character whose name I have no idea how to pronounce (I want to say it like "jellybean" without the "n;" is that right?).

The story reads like the opening chapters of a piece of a children's novel, with a plucky young girl with some common but oppressive problems—her father is missing, she's too smart for her classmates and teacher, she's picked on by bullies—discovering a sad monster in the woods by her house, keeping him a secret from (almost) everyone, and deciding to go on a journey to return said sad monster to his rightful home.

Will she learn a bit about herself, solve some of her problems and discover her own true home in the process? Oh, I have a feeling she will.

If I were reading a prose version of this story, my eyes would likely have glazed over quite quickly, and I probably would have spent most of the seconf half fighting off sleep. But this isn't prose, its a graphic novel, and so any cliched elements of the story exist mostly in the reader's own memory (and, since it's targeted toward younger readers, they've likely experienced far fewer similar stories than bitter, cynical old men like me). And Soo's visual story-telling is simply top-notch. The passages that pass with no words—protagonist Portia's first meeting with Jellaby, her seemingly prophetic dream sequence—are just as clear as those with dialogue.

What most charmed me about the book, however, was Soo's skill at character design. There's a very Bill Watterson-ness to his human characters, with their blank eyes and, in particular, the goonish-ness of his children. Portia, her pal Jason, who also befirends Jellaby, and their classmates are tiny. They look a bit like kneehigh adults, only with giant heads. The older kids who bully them look the same, only bigger. It's a bit like in the world of Jellaby, humans are born as heads, and then their bodies grow out of the bottom of their heads until they reach adulthood and everything is then properly proportioned.

And then there's the title character, who is just an absolutely perfect design. A giant head, comically tiny horns and bat-wings, a bit of an underbite, a pattern of red stripes along his top (one of which forms a sorta nose on his bulbous face) and huge, watery anime eyes. He's fun and funny to look at, and, through him, Soo shows off what an incredible actor he is. The emotions channeled through Portia and Jason are a little harder to read, but Jellaby comes off as a genius silent film star. With nothing more than nods, headshakes, changes in his simple expression, and the way he holds his hands and tail, Jellaby conveys the whole rainbow of human emotion. Jellaby is the Charlie Chaplin of comic book dragons.

The entire book is designed to be something of a reflection of the Jellaby design, rendered not in black and white but almost entirely in different shades of purple, with a red logo on the book's purple spine just like the red stripes on Jellaby's own spine. One of the few exceptions to the purple and ligh-lavendar world of Jellaby are the bits of red and the orange shirts featuring carrots favored by Jason, who, like Portia, seems to have a lot of problems for someone so small. Maybe even more so than Portia but, like the situation with her father, these problems are alluded to without being laid out in the first volume.

There are only two parts I didn't care for.

In the first three panels, Soo keeps the lines solid around Portia and whatever's immediately to her left, with everything else getting soft, like a the background in a movie going out of focus as the camera follows a character in the foreground. Of course, Portia's not moving on an axis that links up with the reader's eyes, but on one that's perpendicular to what we're looking at. It's not really the way a movie camera works. I'm not positive that's teh effect that Soo was going for, but it it was, it's off. If it wasn't what he was going for, then I have no idea what he was.

He uses the technique one other time later in the story, and it works much more closely to the way a it would work in a movie, and thus isn't as noticeable.

The other part I didn't like occurs in the second and third panels on this page:

I'm not sure I understand it. The dark part is apparently the shadows of tree branches, getting all menacing in the next panel, but I'm not sure what that rectangular object on the floor was. I stared at this page for a while, and flipped back to rearead the previous few pages for a clue, but I still don't get it.

Other than those five panels, though? This is a great little suburban adventure story that I'd reccomend to just about anyone of any age. All-ages in the best sense of the word—the literal sense of it. I'm looking forward to volume 2, maybe even more so than the next volume of Flight.

Related: You can read short Jellaby strips and the first sixty pages or so of this volume here.Kean Soo's website can be found here. And you can read Chris Arrant's chat with him about his book for Newsarama here.
Posted by Caleb at 5:04 PM

Okay, never read these books, nor do I want to, exactly, but I think I can interpret the mystery panels with the shadows:

It's not her floor, it's her ceiling. The rectangular object is a light fixture. She's falling asleep, and sees the shadow cast by the tree turn into a dragon's head, viewed from the side. Then she's asleep.

No idea what it means, in the story. But as someone who tries to fall asleep every night, that's what it looks like to me.

It's not her floor, it's her ceiling. The rectangular object is a light fixture.

Oh hey, that would make sense. Cool! Thanks!