A really good Mister Miracle story, in its entirety

A lot of attention seemed to foucs on the nature of Mister Miracle's escapes, which often depended on his high-tech doodad-ery rather than the sorts of physical prowess and skill shown in, say, Houdini: The Handcuff King.

Given the tricky nature of so many of the traps he escapes from, I think downplaying Mother Box's role is probably the best way to depict them. For a good example of how to handle the escapes, I'm hard-pressed to find a better one than Mike Allred's story from Solo #7. 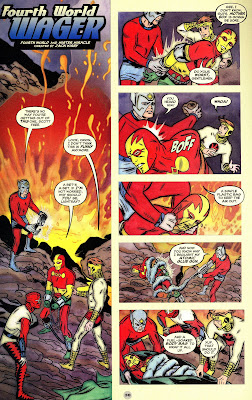 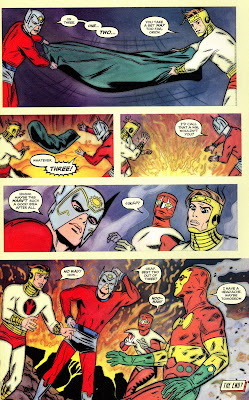 Man, it must be hard being friends with Orion. He seems just a little too quick to bash Scott over the head with a large rock, and a little too slow to have second thoughts about throwing him into a volcano.

I especially like that Allred drew him scratching his hemlet in the last panel...
Posted by Caleb at 1:51 PM

Not sure how many times you could milk that as a monthly, but that's a friggin' great two-pager.

I wonder who I need to bribe for some SOLO collections?

The best part is that none of that escape was planned in advance, and Mr Miracle didn't find out what they were doing until AFTER they had conked him on the head and covered his head in a paper bag.

Still, while I would totally buy a Mister Miracle comic drawn by Allred, this exemplifies part of the problem. The "Surprise, I survived" gag gets old fast. I need an Ocean's 11 moment where you go back and walk through it all, so I can go 'ohhhh that makes sense.'

I honestly hope I'm missing something, becasue I want to be pleased with the piece (besides its art), but.... Uh. How is this a good example of playing up his escapes? He survived by what, magic? He's just there? "Scene missing"?

I prefer to be impressed with trickery I can relate to.

Damn that is some masochistic shit. Almost a Silver-era snuff film...

I think our phenomenon might be a fundamental difference between watching a trick in person and reading about it in a comic book.

If you saw Houdinin live, of course he didn't reveal how he escaped, it was "suprise I survived." But you could speculate about how he did it, and it didn't require belief in any supernatural (or Source!) power, which Houdini actively discouraged.

BUT, in a comic book, this concept is pulled simultaneously in two opposite directions. As a visually explosive medium (especially under Kirby), the escapes just got nuttier and nuttier (hell, Grant Morrison had him escaping from a black hole...). But as superhero comic readers, we're conditioned to expect some rational (albeit untrue) explanation for our hero's abilities. We need to know how Superman can fly, or how Spider-Man's webs work, or we feel cheated. For good or ill, most of us are conditioned not to rely on a sense of wonder or "how'd he do that" in comic books, but to demand no-prizes if our heroes do something that can't be explained.

If Superman escaped a Green K trap, we had that explained to us (usually laboriously over-explained). When Mister Miracle escaped in this story, it was merely "ta-dah!" Maybe I've been overcoditioned, but I prefer to read about the former, and see the latter live.

I see the argument, snell, but I think that most of the things you cite - we don't know how those things work. How DOES Superman fly? By force of will? That's the ultimate non-answer.

How do Spider-Man's webs work? Really, how do they? How is it strong as a steel cable, adhesive and yet easily weaveable? You'd think it would turn into a self-sticking jumble if somebody tried to create something out of it. Why doesn't it stick to Pete's hands either? And, really, speaking as a New Yorker, how impossible would it be to travel by webline around a metro area, particularly outside of a fifteen-block section of midtown?

I get annoyed by "Mother Box did it" cop-outs in Mister Miracle stories, but to me, Scott's escapes are just part of his power. Sometimes, it's fun to see the escape de-constructed, but just as often, it's better to delight in the freedom of his feats without sweating the details.

That's just me though.

The best Mister Miracle story I know is from the JLU cartoon, where Flash helps them on a mission to Apokolips. The flashbacks to his upbringing at the hands of Granny Goodness provided great background to his escape skills. It showed him being able to find the weaknesses in any trap, and that would help the comics verion.Show him finding the area to exploit without other characters seeing how he does it. Let the reader in more often while keeping his tricks a mystery to other characters.
Beyond that, what kind of super-crazy crafts does Orion do with an ATOMIC glue gun?!

"Beyond that, what kind of super-crazy crafts does Orion do with an ATOMIC glue gun?!"

Perhaps the glue gun is used to help repair or replace the costumes of friends he's thrown into firepits for an afternoon's entertainment!