Five fairly random thoughts that occurred to me while reading Manhunter Vol. 4

1.) There’s an astounding amount of connectivity to the DC Universe and its recent past in this book. I’m not talking about the number of villains who appear, although Dr. Psycho, Dr. Trapp, Circe, Everyman and The Madmen all pop up in this collection, or even the one-off guest-stars who appear for particular plot reasons, which this time include Batman, Superman, Sasha Bordeaux from Checkmate, Iron Munroe of The Young All-Stars and Wonder Woman, who practically shares the title with Kate for the duration of the book. It deals with Kate defending Wonder Woman in court for the murder of Maxwell Lord, a storyline that ran through the Superman books, Greg Rucka’s Wonder Woman and miniseries The OMAC Project.

I mean, okay, yes sure, there is all that, but I’m really talking about the regular, month-in, month-out supporting cast of the book. You’ve got D.E.O. agent Cameron Chase from the short-lived monthly Chase; former Infinity Inc. character and current D.E.O. director Mister Bones; former member of Infinity Inc., former Justice Leaguer and more recent JSA heavy Obsidian and former Manhunter Mark Shaw, who is dealing with a plot from the 90’s Bat-books and the old Azrael book.

That’s a lot of stuff picked up from other books. I think it all works quite well, and that’s pretty remarkable, considering.

Please note I don’t bring this up as a negative, only as something noteworthy. Personally, I think universe comics should exploit their connectivity and their universe setting—that is the main thing that sets them apart from non-universe comics, after all—and as long as it's done well, it’s more of a virtue than a drawback.

And Marc Andreyko does it well.


2.) Given all that, I’m pretty disappointed that Tony Bedard was named the new Birds of Prey writer instead of Andreyko, but that’s really a lose/lose/lose situation. I have no idea what happened with that particular bout of who's writing what chaos, but DC really shouldn’t have even put Sean McKeever on the book if he wasn’t going to be there for a long time.

I liked the one issue of Bedard’s fill-in run (which will end up being about as long as McKeever’s “regular” run) that I had read okay, and I liked the Black Canary back-up he did earlier on, but now there’s a real stink of second choice about him, which can’t be healthy for a book that’s already sliding down the sales chart since it lost Gail Simone. (Add to that the suspicion that Bedard being the regular writer on BoP might be like Bedrd being the regular writer on Supergirl and Batman and the Outsiders).

Andreyko handled the character of Barbara Gordon pretty well in Nightwing Annual #2 (I believe the title to that particular story was, “Here Marc, Try To Make Some Goddam Sense Out of The Random Status Quo Changes Done To These Characters in the One Year Later Jump”), it was a decent enough story with some funny lines, and he even slipped in a joke about Dick Grayson trying to hide a boner from Batman.

But mostly I think he would have been a good Birds of Prey writer based on the rather effortless way he integrates the detritus of cancelled books and unfinished storylines into Manhunter. That’s pretty much what BoP is anyway; a handful of supporting characters from other franchises sharing a book that none of them could carry on their own. 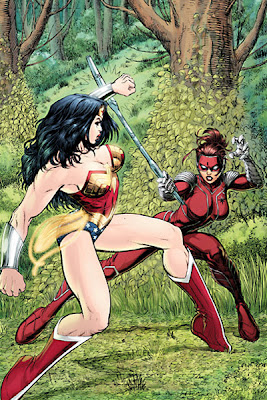 3.) Art Adams does some of his worst work ever on a piece in here. I usually love Art Adams’ drawing, and it’s really too bad he doesn’t do much more than covers these days. I know he’s got quite a rep as a “babe” artist—if you’re an editor and you want a sexy, buxom woman and/or a gorilla on the cover of your comic, Adams’ name should be at the top of your list—but man, this is a pretty bad drawing for Adams.

Usually his exaggeration makes sense within the construction of the image, but his shapely, butt-and-boobs-out, walking-on-her-toes Wonder Woman really doesn’t look like she should be fighting. Her left breast looks like it’s coming out of her neck here, which, obviously, makes for a cover that’s a lot uglier than it is sexy.

Unfortunately, this is the cover of the whole damn trade, too. Not only is it a weak image, but it doesn’t really capture what’s going on in the interiors at all. The two women spar in one issue, but that’s about it. This makes it look like a comic about Wonder Woman and Manhunter fighting. And the latter is in the background, with the former in the foreground, making this look more like a Wonder Woman comic than a Manhunter one. 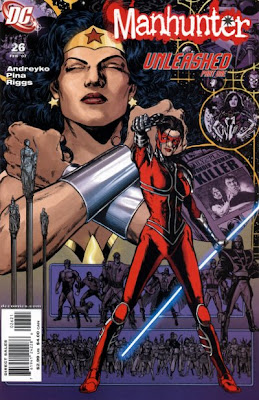 4.) I love Phil Jimenez’s art. The most thunderously disappointing aspect of Infinite Crisis for me was that Jimenez wasn’t able to draw it all, either due to his not being given enough lead time, or him not being fast enough, or because it was being rewritten underneath him (I suspect all three).

I can’t really make sense of the alternate cover he did of Manhunter #26, which appears in the back of the trade, though.

Okay, we’ve got Manhunter and Wonder Woman, obviously, and, in a strip along the bottom, every Manhunter ever (and look, there’s Thor!) and, just below that, just about every Amazon, but I can’t really make sense of any of the faces in the upper right hand corner. Like, why is Donna Troy there in her Darkstar costume? Because Manhunter wears a Darkstar costume? I know Jimenez likes Troy, but that’s really reaching. I couldn’t even identify some of the others.


5.) Obsidian’s role in this book doesn’t quite fit in with his (usually off-panel) role in Justice Society of America.

I think he works pretty well in both books, and Andreyko even jokes about how little he’s had to do in JSoA so far in one panel here, but the two roles don’t seem to work in concert at the moment.

Manhunter is set in L.A., where Obsidian and his boyfriend both live. JSoA is set in New York City. Now, I’m sure Obsidian has access to teleporters and jet planes or whatever, and he may even be able to teleport himself via his powers (I forget the specifics on that), but in JSoA his job with the team is that of the HQ’s guard. So unlike Sandman, another little-seen satellite member with specific function who spends most of his time “in the field,” Obsidian’s the one member of the team who pretty much not only has to live in the HQ, but be there 24/7.

I don’t think it much matters, since DC has put Manhunter is some kind of weird not cancelled, but not being published either limbo and Obsidian’s so rarely in JSoA it’s easy to ignore him, but if any of that should change in the future, it might start to be problematic.

His lack of things to do in JSoA is, on the one hand, completely understandable (Geoff Johns has a huge and ever-growing cast in the book already), and on the other is kind of odd, considering what a natural fit for the team Obsidian is, being one of the first DCU heroes directly descended from one of the JSA members (I’m just sorry he and Atom-Smasher were never on the JSA at the same time as they were on the JLA).

If I had to guess, I would assume that Johns knows the DCU and its characters well enough to realize Obsidian should totally be on the team, even though Johns himself might not really like him (or at least not like writing him).

It might have been nice to have Andreyko do an Obsidian story for JSA: Classified instead of squandering the title switching back and forth between Dr. Midnight and Wildcat solo stories for so long, but I guess it’s too late to plan smart stories that have something to do with the massively successful parent title now that JSA:C is canceled.
Posted by Caleb at 7:47 PM

I too, was rather hoping that Mr. Andreyko would be handling the writing chores for BoP, but Mr. Bedard isn't really a bad choice. What I REALLY want of course, is for Gail Simone to come back, but that doesn't seem to be in the charts at the moment.

I DO wish that they'd bring back Manhunter. And if they are going to have Sandy and Obsidian in JSA, then for heaven's sake DO something with them!