Jeff Smith exhibits: Bone and Beyond and Before Bone 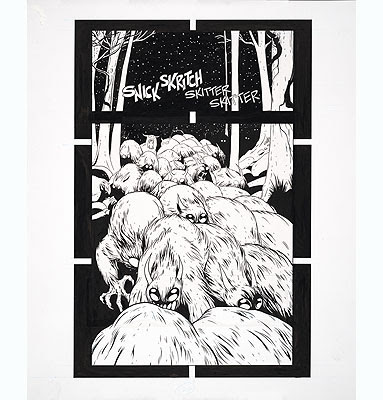 I can’t tell you how many times I’ve walked down the flight of stairs at the Wexner Center for the Arts on Ohio State University’s campus in the course of the eight years I’ve lived in Columbus.

Entering the building at ground level, you find yourself in a little lobby with a desk, manned by a student or volunteer who will sell you tickets or tell you you’re in the wrong building or whatever. And, if you’re in the right building, then you turn around and there’s a flight of stairs descending to where you’ll find the rest of the Wexner Center: The film/video theatre, their bookstore, their main exhibition space, their music performance space and their restrooms.

And yet walking down those same stairs Saturday afternoon revealed a pretty unique experience. See this panel? 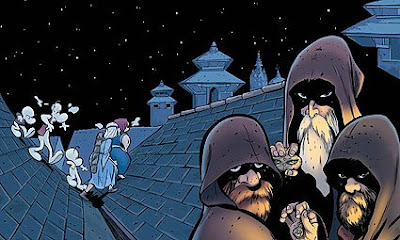 It covered a large wall parallel to the stairs, welcoming visitors to the Wex, which is currently hosting Jeff Smith: Bone and Beyond, and exhibit of the cartoonist’s work (and the work of other cartoonists that inspired it).

I don’t have a digital camera, or even a cell phone camera (or a cell phone, period), which, I realized while taking in the exhibit, makes me a not-very-good candidate for blogging on things like art exhibits.

To give you an idea of the scale though, here’s an image of the piece’s installation, swiped from Steve Hamaker’s blog: 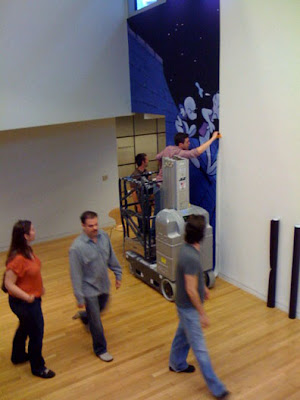 I spoke briefly with show curator Dave Filipi and one the people who helped with the installation about how exactly they put it up, and, while it involves technology so far beyond my understanding that it might as well be witchcraft, its basically a printing of an extremely blown-up original image onto sections of vinyl-y, wall-paper like stuff, and then placed on the wall, in several layers.

The finished product is nice: A gigantic, full-color Bone panel. It was the first of several times during which I found myself divorcing myself from my own experience with Bone, and appreciating Smith’s lines and character designs (and, here, Hamaker’s colors) as art on their own. That is, devoid of context, whoever those people are sneaking around those rooftops, it’s a great-looking image.

Rounding the corner brings you to the exhibit itself, the presentation of which is—I feel a little silly saying this, but what the hell—awe-inspiring.

The entire south wall of the exhibition area is covered in a two-tone vinyl version of a panel, in which Fone Bone and Thorn are shown crouching through the rainy woods. The closest I can come to describing it is this: Imagine being a tiny little bug on the page of an issue of Bone, perched in the gutter below the panel covering the wall. That’s what it looks like.

Here’s an image of most of the wall, which I swiped from the Boneville blog : 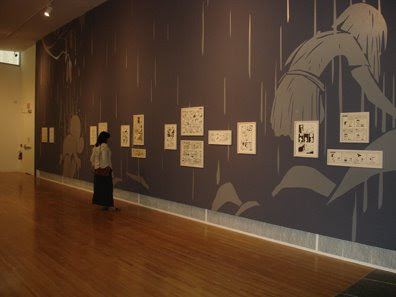 (Check out Boneville’s blog for more photos of the exhibit, and some behind the scenes images of the set-up).

As for the exhibit itself, it includes 80 original pieces. The Smith pieces are mostly his original art for the pages of his books, black ink over faint blue pencils, framed and hanging on the walls with notes from Smith and OSU’s Cartoon Research Library curator Lucy Shelton Caswel.

It’s a real treat to see the work in person and up so close, both as a comics reader and simply as a viewer regarding the pages as art objects.

There were two pages from Shazam!: The Monster Society of Evil (the spread featuring giant Captain Marvel punching out the two giant monsters), and six from RASL #1, along with the cover.

The rest of the Smith pieces are original pages from Bone, including a few color pieces, and Bone #16 in its entirety.

No offense, to Smith, whose art I really can’t say enough good things about, but the real treat of the show was the work of his inspirations sprinkled throughout it.

Here are the original pages and strips you’ll see alongside Smith’s:

—A pair of Doonesburys from the ‘70s

—A 1932 E.C. Segar Thimble Theatre strip, in which Popeye tries fighting with words instead of his fists, and ends up punching his enemy out (I can’t remember the last time I laughed out loud at a gallery show)

We’re lucky to be living in a time where large chunks of all of the above are readily available in thorough, handsome collections assembled by extremely knowledgeable editors for appreciative audiences. And as cool as it is to be able to read the first few years of Schulz’s Peanuts, back when the lines were more solid and smooth and the character designs cuter, or whole books of giant Krazy Kat Sunday strips, there’s something—okay, I’m gonna say something cheesy again—magical about seeing the actual pages.

There’s a light pencil line Schulz didn’t mean and didn’t ink over here, he lines guiding the letters on Eisner and Barks’ strips. Here is an actual piece of paper that Segar drew Popeye on; here’s one that Herriman himself touched for a few hours, drawing all those individual lines shading the pile of bricks.

I suppose Caswell gets to handle these things all the time, as do the folks at Fantagraphics or DC putting together their various strip collections and The Spirit Archives, but after years of only seeing reproductions, it’s hard to overstate how cool it is to see a Peanuts strip at the size Schulz drew it, complete with every pencil mark, including the ones that didn’t make it onto the newspaper page.

The other Smith-related exhibit currently on view at OSU is smaller and less, um, magical and awe-inspiring, but is arguably of greater interest. It’s Jeff Smith: Before Bone, and its on display at the cartoon research library, right next door to the Wexner Center.

During their talk on Saturday, Smith was telling Scott McCloud about his work on Thorn at OSU’s student newspaper The Lantern in the early ‘80s. It was, he said, essentially just Bone—all of the same characters were involved—but it was obviously a lot less polished, and formatted like a daily adventure strip, rather than a comic book.

When McCloud asked if they’d ever been collected, Smith pointed out that Caswell was collecting them for the first time as part of this exhibit, a limited run of just 500 copies (If there are still some left, you can order one here).

McCloud asked what Smith thought of Thorn now, and he replied, “I hated them; I can’t hardly look at them.”

I doubt others will feel the same. Obviously, the strips aren’t all that great (although they’re certainly not at all bad for a college newspaper strip, for which its incredibly ambitious), and don’t compare at all favorably to Bone the comic, which Smith has tinkered with over the years (Saturday he said he redid about 150 of the 1,300 pages before the final one-volume edition).

But it’s pretty amazing to see this alternate, pre-Bone Bone, like a pilot series for a later series.

The character designs were almost all completely final at that early point, but rougher, and lacking the polish they’d gained by the point Smith started putting them in his comics.

The Doonesbury influence was a lot more evident here than in the comic books, and you can see the constraint the strip format put on the narrative and presentation. It’s hard—if not impossible—to appraise these strips without judging them against what they ultimately lead to.

It sure is cool seeing Bone in this weird, new (and by new I mean old) format, the characters in landscape-less panels, drawn in medium-shot profiles.

As a Columbusite, it’s both pretty cool and extremely weird to see things like the Bones talking about being from Ohio State, or OSU’s mascot Brutus Buckeye showing up in one of the panels.

Caswell describes Thorn as non-linear, and from the strips on the walls, they do seem to go off in weird little tangents, like the Bones getting jobs, a politician that might have been a Ronald Reagan parody asking Thorn to be his running mate because she had great legs (She does; Thorn’s Thorn seems somehow a lot sexier than Bone’s Thorn, for some reason), and several strips in which the characters interact with Smith himself.

In addition to the Thorn strips, Before Bone features a page from Smith’s college sketchbook under glass, along with what’s gotta be the first Jeff Smith trade, Thorn: Tales from The Lantern, and a group of books that influenced his work at the time: Some Gold Key Uncle Scrooge comics, a couple issues of Mad, some DC Tarzan comics by Joe Kubert, Mark Twain’s Huckleberry Finn and one of Walt Kelly’s Prehysterical Pogo collections.

(I wasn't going to list all those guys' names, but I went to the show's site to refresh my memory as to who was there, and got amazed all over again.)

Wow, sounds like a fantastic exhibit! I loved the initial comic-book run of Bone. I still love it.

And you're absolutely right -- there's nothing like seeing the ORIGINAL, hand-drawn artwork right in front of you, where you can see all of the little marks made by the artist(s) during the drawing process. It's fascinating.