The Other Secret Invasion: Millennium #2 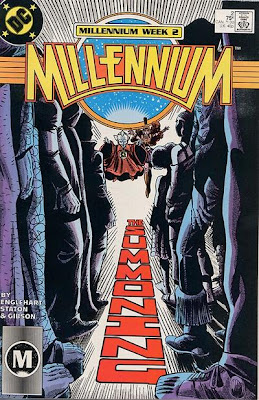 Despite the similarities of their synopses—eight-part miniseries from big, New York-based comics publisher about a hostile alien force secretly infiltrating the world of their heroes—Marvel’s 2008 Secret Invasion and DC’s 1988 Millennium diverge sharply within their second issues.

As I mentioned in my review of Secret Invasion’s second issue, relatively little happened in it. The 1970’s-looking Marvels mixed it up with the modern Marvels in the Savage Land until a Tyrannosaur broke it up, we learned that at least one of them may actually be the genuine article and not a Skrull (that doesn’t square with Marvel continuity exactly but then, neither does Brian Michael Bendis*), and a bunch of Super-Skrulls attacked Manhattan, which hasn’t been invaded by aliens since the last big Marvel crossover.

In Steve Englehart, Joe Staton and Ian Gibson’s Millennium #2, however, the Manhunter androids have begun giving the superheroes grief, and Guardian Herupa Hando Hu and a Zamaron Nada Surf Nadia Safir begin their quest to find ten chosen humans who will soon give rise to a new immortal race of earthlings.

In other words, here’s where the book starts to get good. Because Englehart is making an earnest attempt to have the ten chosen people be representative of the diversity of planet earth (racially, ethnically, politically and sexual preference-ly) and Gibson’s art leans hard toward the cartoony (particularly when not drawing a superhero with a well-established model sheet), the results tend to be some pretty broad caricatures. 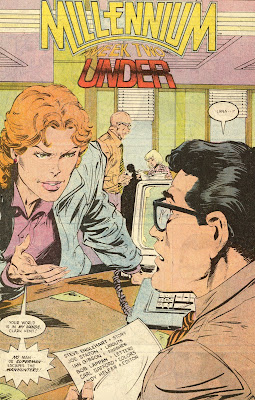 This second chapter opens in The Daily Planet office, where reporter Clark Kent is busy proofing the credits for the issue. He’s suddenly accosted by ex-girlfriend Lana Lang, who can’t stop shouting about Manhunters and Superman.

What’s her deal? Is she trying to blow his secret identity? Perhaps—since she herself is a Manhunter! She wants him to stay out of the Guardian/Manhunter struggle to start/stop a new race of immortals, and if he refuses to comply, it’s out with his secret identity.

But this isn’t a story about Superman. Oh, no. As Englehart’s narration says,

No? It’s not? Then what were the readers of 1988 flushing away their 75 cents-per-issue for?

This is, it turns out, a story about people—regular, run-of-the-mill human beigns like you or me. Or Australian Aboriginie Betty Clawman, whom HHH and NS find at Ayers Rock near Alice Springs: 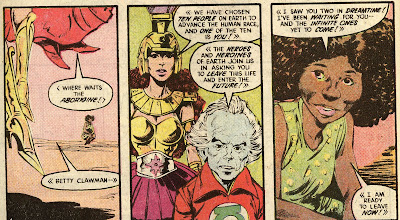 She’s the first of their candidates, and embraces their offer. The others are much less likely to do so, HHH explains, as he and Nadia begins their visits. 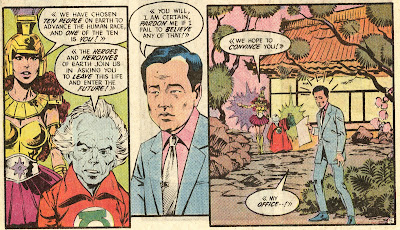 whose inscrutable face belies no hint of surprise at Herupa’s conversion of his office, although the “surprise lines” that radiate from his head do give away his true reaction;

whom the aliens decide to approach while in the middle of a crowded Chinese street, where passersby can shout their own opinions about what to do to her; 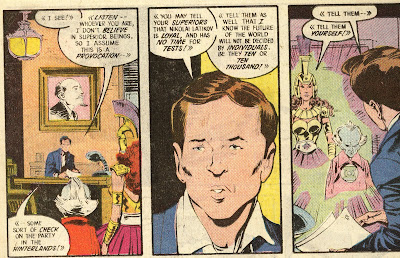 (Please note the portrait of Lenin in his office; did you ever notice how much Green Arrow resembles Lenin?); 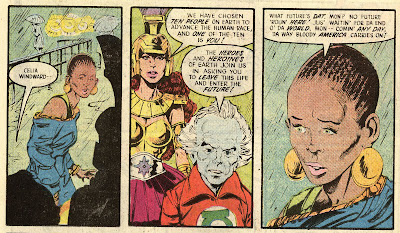 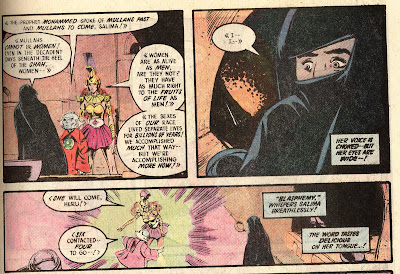 (What are the chances of seeing a scene like this in comics today, post-Danishcartoonopaclpyse, I wonder?);

South African asshole Janwillem Kroef, who greets the pair with, “Who are you woman, and what do you and your blue dwarf want?”

(Nadia and Herupa seem rather bemused at the casual racism and chauvanism Kroef displays, don’t they?);

and then, everyone’s favorite character from Millennium, Peruvian Gregorio de la Vega, the gayest character in the history of the DC Universe 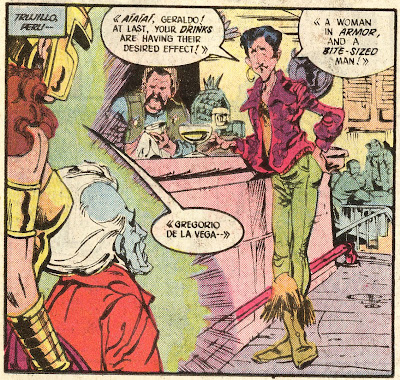 When I first read Millennium, about, oh, five to ten years ago, maybe?, I was appalled at Gregorio and just how…broad his character was, and that DC was like, “Yes, this seems like a perfect portrayal of a gay character who will be our first out gay superhero by the time this series is over.”**

The magenta shirt unbuttoned to the crotch, the huge hoop earring, the posture, the moustache, the drink—It’s not easy to stand out as visibly gay in a universe that’s home to Vibe, Wonder Woman and Batman and Robin but, well, mission accomplished Gregorio designers! 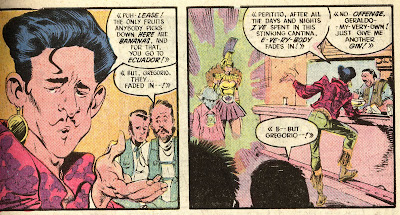 Anyway, like I was saying, when I first read Millennium, I was struck by how unbelievably broad Gregorio was. But re-reading it to compare it to Secret Invasion, I found Gregorio hilarious. I don’t know, is he still considered offensive? Because he kinda cracked me up with that “E-ve-ry-body fades in!” line.


While the space immortals were making their rounds, the heroes of the DCU had their own problems. Blue Beetle Ted Kord suspected someone was trying to blackmail him on behalf of the Manhunters (someone who pulls a gun on him, which Kord slaps away to the sound effect of “PLOW!”, which is, coincidentally, the same sound that an android’s fist makes against a man’s face). And meeting with his trusted friend James Gordon, Batman learns that no man escapes the Manhunters—not even a Batman!

Lucky for him the Gordon Manhunter decided to simply pistolwhip him out an open window with the gun in his hand and not, you know, shoot him with it. 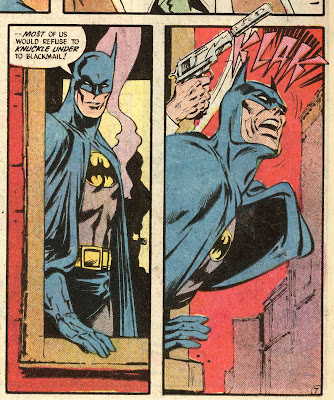 What’s that? You thought the space immortals needed ten candidates, but we’ve only heard of eight? Well, they have some words with Harbinger from Crisis On Infinite Earths, The Floronic Man seems to think he’s been chosen (although he is crazy, and incarcerated in Arkham when he begins ranting and raving about it) and, they make one more stop: The hospital room of Hal Jordan’s friend Tom Kalmaku.

You’ll remember last issue Kalmaku was hospitalized when caught by the Manhunters he was syping on for Hal, who was busy at a pool party.

Just before Nadia and Herupa arrive to make Tom an offer, he’s awoken by the Green Lanterns, who adopt extremely manly poses and try to comfort him. 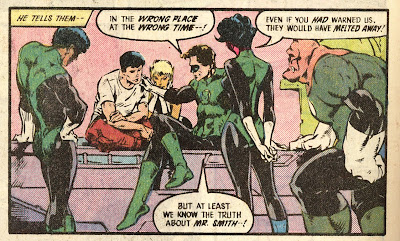 Well, best not to dwell.

Will these nine-to-ten Earthlings accept the space immortals offer? Will the Manhunters get to them first?

If it were 1988, you’d need only wait one week to find out in Millennium #3. Now you’re going to have to wait until Secret Invasion #3 drops, and I waste devote another post to last century’s greatest company-wide crossover about aliens secretly infiltrating a shared superhero universe.

Previously:
The Other Secret Invasion: Millennium #1


**Was Extrano the first out gay superhero in the DCU? This period of DC history is pretty spotty to me, as I wouldn’t start reading comics until a few years after this book was released.
Posted by Caleb at 3:38 PM

Gregorio is really offensive, but he has some of the best lines in the entire mini series. He's much more interesting than the set of bland characters he's paired up with.

Ok, I am now officially intrigued. When you first brought up Millenium, I even blogged about it, asking if anybody thought that it was worthwhile to get, and unfortunately, most of the replies were a resounding NO! And yet...it does have Green Lantern backsides in it, and how can you possibly go wrong with that?

And Gregorio looks as if he's very comfortable with who he is.

I'm with Sally. Now I really want to read this story for myself.

It's a shame they haven't made this into a trade yet.

Well, the wonderful thing is, Derek, that they are going to! They are bringing both Millenium and Invasion out in Trade! Now I don't have to go hunting through dollar bins, as pleasurable as that can be.

Extrano was the first openly gay character I ever remember reading in DC. As offensive as the degree of stereotyping was, I have to agree that he wound up being the only memorable character to come out of that group.

I bought the piece of garbage that was Millenium when it came out in 1989. Yes, Extrano was the first openly gay superhero.

The sillier thing though was that Steve Englehart left the spinoff series New Guardians after the second issue. This was because the dreaded Powers That Be decided that when Gregorio became Extrano, it miraculously 'cured' him of being gay.

You know, while Extrano is Extreme, I don't think he's actually offensive. I've met people like him before, for whom being gay means playing that kind of outrageous character. The "flaming queen" persona.

Comics are dishing out more gay characters today, but they're never outrageously gay, and in fact, act no different from straight men except for who they date. They exist, but there are also a lot of gay men who are set on gay pride parade mode. We rarely if ever see those.