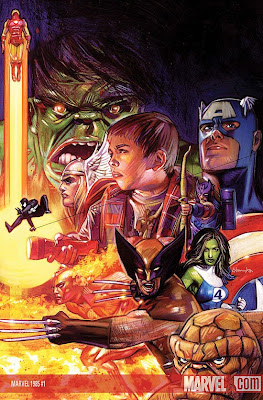 It takes some real chutzpah for a company to charge $3.99 for a 23-page issue of an out-of-continuity, standalone story while in the midst of a line-wide, you-need-to-read-this-because-75%-of-our-titles-are-involved crossover story that will cost at least $315 to follow completely.

I can’t imagine it makes a whole lot of business sense either. Even if the series is written by the self-proclaimed best-selling comics writer of the 21st century, it will be running concurrent with three other out-of-continuity or continuity light series by the same writer, each of which is being drawn by a bigger name artist (Kick-Ass with World War Hulk’s John Romita Jr., Wolverine with Civil War’s Steve McNiven, and Fantastic Four with The Ultimates’ Bryan Hitch).

Which is a long way of saying I moved 1985 from my store pull-list to my mental wait-for-the-trade (maybe) list when I saw the price tag and page count. I know I’ve said this before, and I doubt anyone who can do anything about it is listening, but I’m going to repeat it because I like the sound of my own voice: A thicker cover stock isn’t worth an extra buck.

If you came to EDILW looking for criticism of the contents of 1985, “Best Shots” team captain Troy Brownfield has a well written—and less than glowing—review of it here.

I do like that cover; it gives off a Star Wars/Indiana Jones movie poster vibe.
Posted by Caleb at 11:43 AM

I gave 1985 a miss because it seemed to me to be the same old rehash of a tired idea. "Superheroes --- but in OUR WORLD!" I only skimmed it, so I may be missing a big twist, but I was bored by what I saw.