This week's example of Iron Man's crush on Captain America: 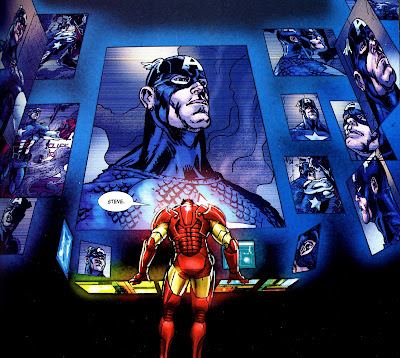 (Courtesy Alex Ross, Jim Krueger, Steve Sadowski and "inLight" Studios. You can find context in Marvel Comics' Avengers/Invaders #1, but me, I prefer to think of Tony brooding in a room-sized, holographic shrine to Cap)
Posted by Caleb at 2:24 PM

After seeing the Iron Man movie, I don't think I can read another comic featuring the character. Iron Man comics (or scenes in other comics featuring Iron Man) are rarely ever good, but the fact they continue to not be good in spite of a movie that perfectly nails the character is just embarrassing.

Although Ross and Krueger nailed the character toward the end of Earth X: "Leave it to the billionaire to buy the world more time."

It occurs to me that Iron Man can look at Cap's picture on his armor's viewscreens at any time and yet he still fills a room with pictures of Steve. It's like he wants someone to walk in on him and "out" him.

And now that I've realized he can put Cap's picture up on his armor's viewscreens, I'm going to re-read a bunch of Iron Man appearances with the knowledge that half of Tony's attention is secretly focused on Captain America's picture.