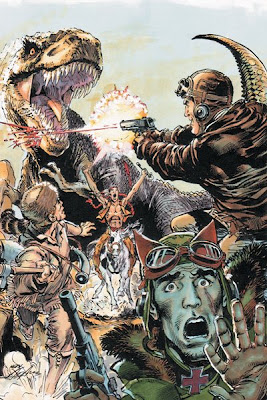 This week, DC will release the first issue of The War That Time Forgot, a new, 12-issue limited series dealing with the 1950s WWII G.I.s versus dinosaurs premise of Robert Kanigher’s. Judging from the solicitations, the dinosaurs won’t be the only time-lost combatants in the book, as the cast seems plucked from various times as well.

So not only will we be seeing WWII soldiers versus dinosaurs, a concept that is entertaining for at least 500 pages, but we’ll be seeing Firehair, Tomahawk and Viking Prince fighting dinosaurs. And, of course, Hans Von Hammer, The Enemy Ace.

Enemy Ace versus dinosaurs, is there anything more exciting in the world of comics? No, no there’s not. (But please don’t get too excited; it’s being written by Bruce Jones, the guy who wrote a Hulk-free Hulk comic and some of the worst Nightwing comics ever written which, considering the low standards of Nightwing comics, is an incredible accomplishment).

Now, I know what you’re thinking (or at least I know what I like to imagine you’re thinking)— World War I flying ace in a rickety old tri-plane versus the gigantic killers of the Age of Reptiles? How can even the Hammer of Hell hope to prevail in such a situation?

Just by being himself, a born killer who, once in the cockpit of his blood-red Fokker Dr.I, is completely unstoppable.

Besides, it’s not like this is his first dinosaur rodeo. According to my longboxes, Von Hammer has come up against dinosaurs on at least two previous occasions, and he totally killed the fuck out of them.

Let’s take a look, shall we?

Let’s start in 1992, which is when the earliest Enemy Ace vs. dinosaurs comics I have in my collection were published. I refer to four-part miniseries Armageddon Inferno which, despite its name, didn’t really have anything to do with Armageddon 2001, aside from prominently featuring that previous event's protagonist, Waverider. 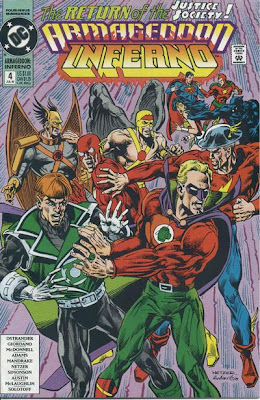 This book is not available in trade, something that is at once a little bewildering and also completely understandable. See, as far as DC events go, this is a pretty huge one—this is the story in which the Justice Society of America escape their post-Crisis status quo, trapped in a Valhalla-like dimension forever fighting off the forces of Ragnarok to keep the end of the world forever in check. That is, after being taken off the table for so long, this is the story in which they get put back on it, leading to a pretty good (but under read) Justice Society of America monthly by Len Strazewski and Mike Parobeck.

On the other hand, it’s not very good or terribly well-written, as I discovered upon rereading it (This was actually a bit of a shock, since 15-year-old Caleb loved it). However, as bad a comic as it is, it’s one of DC’s best not-very-good comics, due in large part to the art, and the unusual nature of how it was doled out.

The story, by John Ostrander, involves a monstrous nigh omnipotent entity known as Abraxis transforming a small group of followers into “daemons,” each with a supervillain name and often rather cool power. Abraxis is attacking the world in a rather unusual way, building himself giant bodies in several different time-periods.

To defeat him, Waverider must call on different bands of heroes from throughout history, but he’s limited in who he can send when without completely destroying the timestream. The end result is a four-front war between Abraxis’ daemons and DC heroes from various time-periods, each drawn by a fan-favorite and, frankly, awesome artist.

Luke McDonnell handles the framing sequences and those involving Waverider solo and, as much as I’ve liked McDonnell’s work elsewhere, these are kind of weak. However, that could be simply compared to whose work his work appears next to. 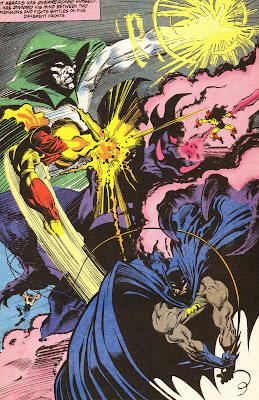 So we’ve got Batman, Firestorm, The Spectre, The Creeper and plainclothes Ultra Boy of the Legion of Superheroes, as drawn by Tom Mandrake, a guy with plenty of Batman and Firestorm experience, who would go on to draw the best Spectre stories ever. 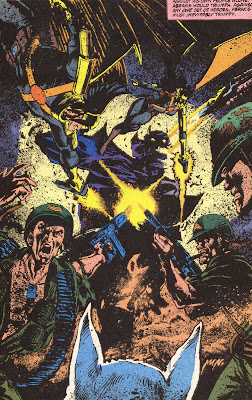 We’ve got World War II heroes Sgt. Rock and Easy Company, Navaho Ace Johnny Cloud, Gunner, Sarge and Pooch and the Thanagarian Hawks of the early ‘90s, all as drawn by Mike Netzer. 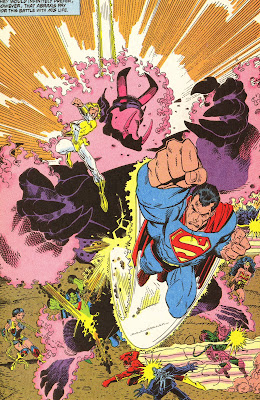 We’ve got the super-powerful superhero squad Superman, Wonder Woman, Martian Manhunter, The Flash, Power Girl and Donna Troy (in her least terrible costume ever), drawn by Art Adams (Who does some pretty incredible design work on his daemons). 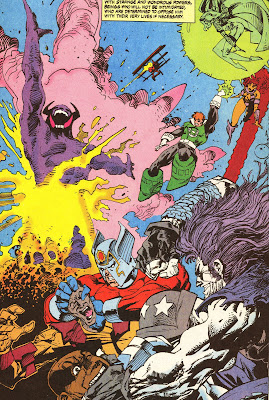 And, most relevant to the discussion of Enemy Ace vs. dinosaurs, we get a team consisting completely of people-who-you-would-not-want-mad-at-you: Starfire, Green Lantern Guy Gardner, Lobo, Orion and, of course, Enemy Ace, as drawn by Walter Simonson.

Now, Simonson’s best-known in superhero circles for being the guy who best made good comics out of Jack Kirby’s cosmic mythology concepts. So no surprise that he does a really good Orion (and, about a decade later, would base a series around the character which fellow Best Shots @ Newsarama.com contributor Michael C. Lorah tells me is the greatest DC comic in, like, ever).

But who knew Simonson could do so much with an essentially silly character like Lobo, and his giant-ass skull cycle? Or Guy Gardner; this is probably my favorite Guy Gardner ever. Or the subject of this post. I love how rigidly straight the wings on the plane are.

So, each of these specially assembled strikeforces are sent to a different point in time to destory the giant Abraxis statue monster things before they can be animated. Simonson’s squad is sent back to dinosaur times, giving Von Hammer the chance to discover if he truly is the deadliest killer to ever fly the killer skies: 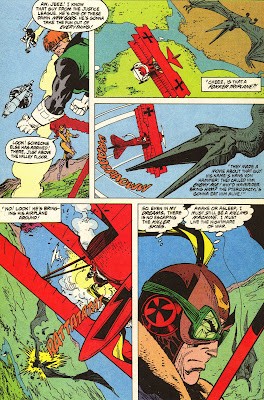 It’s 1998’s Guns of the Dragon, written and illustrated by Tim Truman, master of the two-fisted pulp tale of manly action. 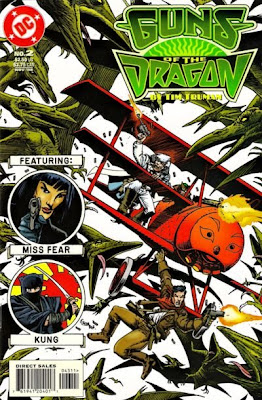 This manly action is set in 1920s Singapore, where aged, roguish cowboy Bat Lash has fled due to some disagreements with some folks in the U.S. He’s set up a bar there, where he employs Slam Bradley’s brother Biff Bradley as his bouncer, and, one fateful night, ends up serving drinks to one Baron Hans Von Hammer.

The trio of adventurers are hired to visit the island that would eventually become known as Dinosaur Island to retrieve a pair of swords and a living dragon to fulfill a prophecy about ruling China or the world or something. They make for a pretty sweet team, but they’re only part of the cast. You’ve also got Blackhawk characters Miss Fear and Chop-Chop, plus the immortal villain 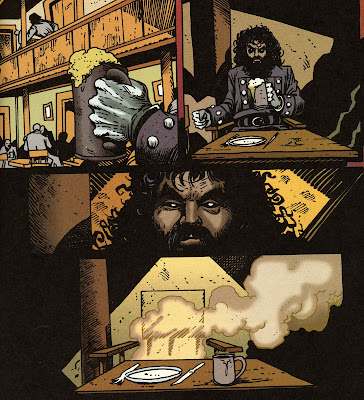 Vandal Savage, looking better under Truman’s pen than just about anywhere else I’ve ever seen him, 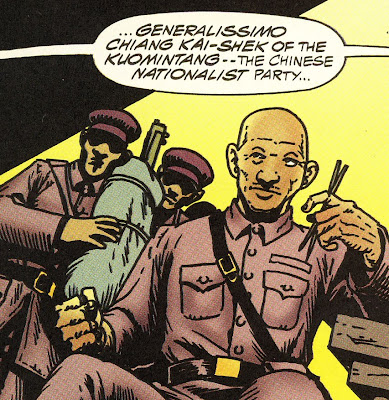 Lash, Bradley and Von Hammer race for the prizes against Fear, a band of Japanese ninja were-creatures and Savage’s crew, with dinosaurs constantly complicating matters.

Here’s the Enemy Ace taking advantage of the distraction provided by a Tyrannosaur to get into his plane. But his noble conscience refuses to allow him to leave the ninjas to be eaten alive by a dinosaur, so he does what he does best: 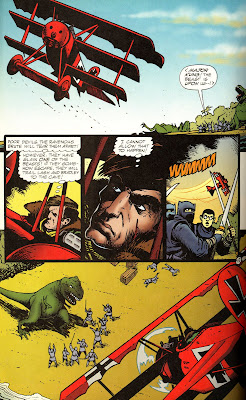 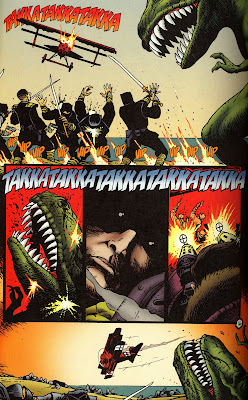 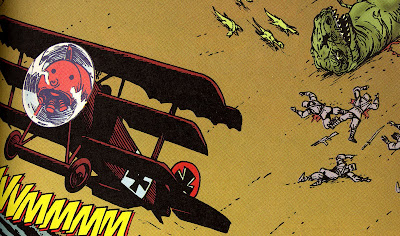 Man, this new War That Time Forgot series is going to have to try awfully hard if it wants to top Guns of the Dragon, which features Enemy Ace machine-gunning a dozen ninjas and a Tyrannosaurus Rex to death in the space of a single page.

Later, Von Hammer is fighting a sword-wielding ninja were-rat with the biggest wrench in the German air force as a flock of a pterosaurs close in on his plane. One flies a little too close to the propeller, leading to the best propeller-generated gore jokes in comics history: 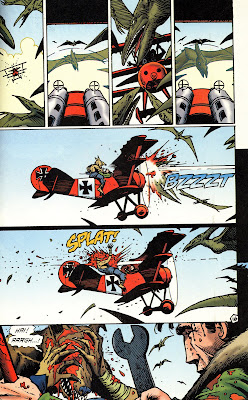 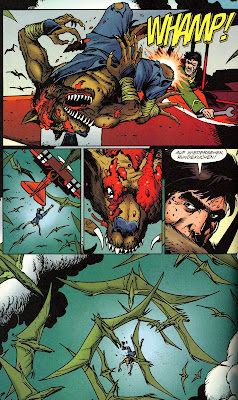 And while those are among the better Enemy Ace scenes with dinosaurs in Guns of the Dragon, they’re not even the best part of the series (I think that’s probably the part where Biff Bradley rides a rampaging Triceratops straight into Vandal Savage's chest).

Sadly, Guns of the Dragon hasn’t been collected in trade yet either, but hopefully DC will get around to it now that there seems to be more interest in these characters and the island full of dinosaurs, thanks in large part to their Showcase reprints and, of course, this new War That Time Forgot series.
Posted by Caleb at 2:21 PM

Sigh. Armageddon Inferno makes me nostalgic. After I read like one Batman comic, this was my intro to the rest of the DCU. Just like fifteen-year-old Caleb, twelve-year-old Mr. Fob thought it was pretty damn cool. I hope they do put it in trade, and now that it's been mentioned on the comics blog responsible for such trades as Invasion! and Millennium, I really do have hope.

I'm pretty sure I thought A:I was terrible at the time. At least, I've never ever reread them, which indicates a certain lack of affection. If you'd asked me two hours ago a) what miniseries brought the JSA back from limbo and b) what gimmick crossover character was involved in it, I couldn't have told you, though I would have remembered that the resolution involved substituting some immortal demon dudes for the JSA in their eternal fight with Surtur.

I'll bet DC: New Frontier also has at least a bit to do with revitalizing interest in all the properties showing up in Time Forgot.

Dinosaurs are always fun of course. I do love that cover, although I think that Enemy Ace looks uncharacteristically flabberghasted. It's probably the Indian as opposed to the Dinosaur that he finds startling however.

Good point. In that one story he sees volcanos, dinosaurs and a giant albino space biker and is all like "Ho hum, I must be dreaming. Might as well start killing things."

What's he freaking out about? Does he see us looking at him, Animal Man-style? Or is there something really scary we can't see?