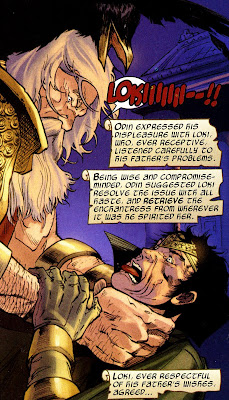 1.) Matt Fraction is a really good, really funny comics writer, who knows how these things work well enough to contrast his narration with the images to produce occasionally hilarious results.

2.) In one scene, Thor throws his hammer through a frost giant’s head.

3.) In another scene, Thor throws himself through a frost giant’s head.

4.) It includes this perfect panel, in which we see the Odinson, having apparently just finished a sevensome with his harem, chowing down on a golden apple. The golden apple is the Asgardian equivalent of the cigarette, apparently.

What makes this panel so brilliant? “RONCH RONCH RONCH.” (Please see Chris Sims’ alt text for the image to read a joke about this panel I wish I’d thought of).

See, there are three RONCHs in that one, single panel, and, as we all know, a single panel of a comic equates to a single moment in time. So Thor isn’t just eating that golden apple, he’s eating the hell out of it—taking three bites in the time it takes that one woman in his harem to crawl towards him. Is he famished after all of that love-making? Is he powering up with another golden apple for another round of it? Does Thor just eat apples as hard as he kills frost giants? These are questions to consider while awaiting next month's follow-up, Regin of Blood.
Posted by Caleb at 3:27 PM

That's it? Just four reasons, and those are them?

Plus *RONCH* is the sound that Rorschach made when eating sugar cubes.

Verily and foresooth, I agree.

This really was awfully good. Lots of beautiful artwork, some high-flown dialogue that was slyly witty as well.

You forgot to mention that after Thor throws his hammer through the Frost Giant's head, he decapitates the giant, picks his head up by the monster's nose ring, then drags it and several other giant heads down main street in Asgard. HELL YEAH.