Strike while the iron is ice cold! 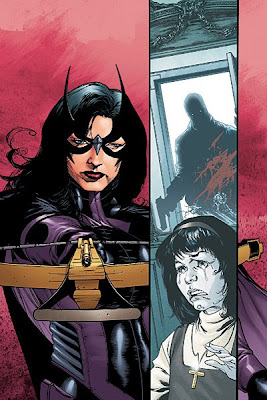 This past Wednesday DC debuted the first part of a new six-issue miniseries, Huntress: Year One, by Ivory Madison, Cliff Richards and Art Thibert. It's a pretty perplexing release, and retailer/reviewer Brian Hibbs lists some of the reasons in his Savage Critic review.

As Hibbs pointed out, it can't be a book that DC thought would sell terribly well. The Bat-family solo spin-offs—Nightwing, Robin, soo- to-be-cancelledCatwoman—are all doing less than stellar these days, and the Huntress isn't even part of the Bat-family proper any more. The book she calls home—Birds of Prey—only sells in the 20K neighborhood, a bit bettter than Catwoman and there's she's part of an ensemble, not carrying the book herself.

The artists attached are pretty good, and while Madison is an unknown quantity, she's the sort of unknown quantity I imagine readers will be curious about (I was pretty amused to see that her website referred to this comic book series as "a graphic novel;" perhaps it's just shorthand to communicate to "civilians" and/or the book industry, but it denotes a certain amount of shame and/or sensitivity about the word "comics"). But none of them are the sorts of big names that would move a Huntress book in big numbers, so DC can't be thinking these creators will move such a book where the character won't.

One could also raise the question of relevance, but then, that's been the case for all of DC's recent Year One miniseries.

Green Arrow: Year One re-told an origin that gets pretty regularly re-told, but boasted an interesting creative team (The Losers' Andy Diggle and Jock), came at a time when DC was clearly trying to promote the character (around the time of his wedding to Black Canary), and filled the publishing gap between the end of Green Arrow and the launch of Green Arrow/Black Canary.

Teen Titans: Year One similarly tells an origin that isn't very mysterious and which there are no questions about, but makes a certain amount of sense within DC's nonsensical attempts to flood the market with Titans books (Teen Titans, Titans, Tiny Titans and solo minis for Wonder Girl, Raven and soon Cyborg).

And then there was Metamorpho: Year One, the origin of a bit player in low-selling team title The Outsiders by a not-exactly-hot creative team.*

Of course, Huntress: Year One is unlike the others above in that it falls squarely in the shadow of another six-part Huntress origin miniseries, 2000's Batman/Huntress: Cry For Blood, which has the benefit of a higher profile writer, a high profile guest-star (and branding in the title), and being, at the time, much more relevant to other books (Greg Rucka was then writing Detective and was thus part of the Batman office's stable of creators, and Huntress was pretty firmly ensconced in the Bat-family, rather than in Birds of Prey).

From this side of things, it's impossible to tell why DC greenlights certain projects and not others, of course. Perhaps sales on the recent-ish Huntress: Dark Knight Daughter trade paperback (collecting the old pre-Crisis Huntress stories) were brisk enough that DC's data suggested the existence of a bigger Huntress market than seems apparent from where I'm sitting.

What I find most perplexing about all of this, however, is that DC decided to greenlight a miniseries telling the origin of a masked, caped, female, Gotham vigilante, and they went with the Huntress and not, oh, I don't know, Batwoman.

Remember her? The sensational character find of 2006? New character introduced to much fanfare in 52? Often said to be getting her own series (most recently here), a series that never actually materializes? Origins completely shrouded in mystery? Only had a handful of appearances?

She seems like a better candidate for a Year One mini, doesn't she? Her origin is certainly virgin territory, giving a creative reason for such a book's existence, and the fact that she has the word "Bat-" in her name guarantees a higher level of sales than a Huntress series, no matter who the creators are.

Huntress: Year One isn't the only new miniseries starring a masked, caped, female, Gotham vigilante that's not Batwoman, of course. A Batgirl miniseries is also in the works, starring Cassandra Cain. She had formerly starred in an ongoing solo series, which DC canceled not due to sales as much as to streamline the Bat-family and their line of books (presumably to make room for Batwoman and Batwoman). But since that never materialized, they've gone years without selling Batgirl or Batwoman books, and are now trying to sell a Batgirl miniseries. The fact that it is from a writer who is widely perceived as having "ruined" the character and an artist most-associated with Countdown and related projects, makes it another sure-not-to-be-a-hit book.

How did both of these books beat Batwoman out the gate? And why is DC waiting until any and all interest in Batwoman has dwindled before trying to capitalze on her now two-year-old high-profile debut? I honsetly don't know, but these not-Batwoman projects keep raising those questions.

*Meanwhile, top-tier characters whose origins could actually use post-Infinite Crisis/52 rejiggering clarification, like Superman, Batman, the JLA and, most especially, Wonder Woman, get none. I don't think we necessarily need four official Year One minis featuring those characters—certainly they'll never do another book called Batman: Year One—but stories dealing with their new origins would certainly make sense.
Posted by Caleb at 6:14 PM

Well, I have to admit that I bought it and I enjoyed it. I really mostly know Huntress from Birds of Prey, and I'm not much of a Bat-Fan. The art was pretty and the story was good, so what the hey?

I AM still waiting for my Guy Gardner:Year One mini-series however.

Batwoman really would have been a better choice--lots of people are interested in and waiting for something focussing on this character.

What's the point of making a big deal out of having this new gay character if you're not going to DO anything with her.

I also agree with Sally, though, it would be nice to see a re-exploration of Guy Gardner's early years.