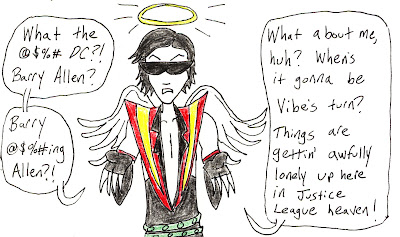 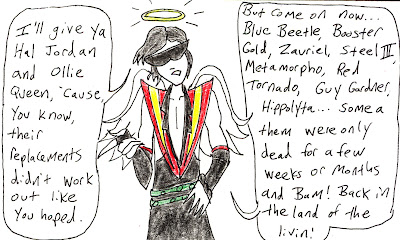 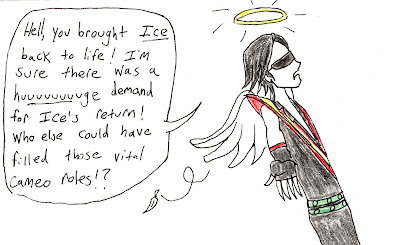 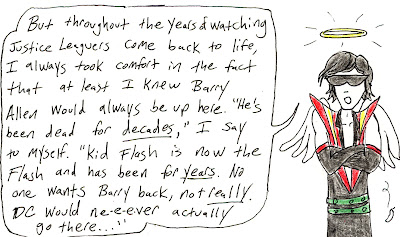 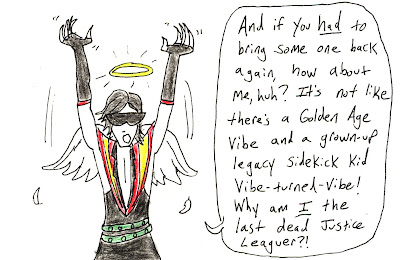 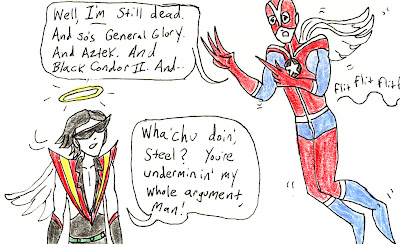 (Please note: The opinions expressed by Vibe do not necessarily represent the opinions of Every Day Is Like Wednesday.)
Posted by Caleb at 9:42 AM

They do however represent very well the opinions of the Absorbascon.

I'm Kevin Huxford and I approve of this Vibe message.

Barry's been dead for longer than I've been reading comics. Are there really Barry fans still out there?

Well, I LIKE Barry. But I can understand Vibe's melancholy. When the day comes that the DC Universe needs his awesome breakdancing powers, I'm sure that he'll BE THERE!

that font sure is hard to read.

But Vibe has so much more to offer than breakdancing. He has...the ability to offend more people than the all-Spanish Blue Beetle discussions?

that font sure is hard to read.

That font is called "Caleb's poor penmanship." I suppose I coulda installed Photoshop, scanned those drawings into Photoshop and taught myself how to computer-letter, just as I could have colored those in a computer program instead of using colored pencils, or made sure the head and body were in the same proportions in each drawing, butthat seems like a lot of work for a low-yield joke meant to amuse a dozen people scribbled out during commercial breaks of Dancing With The Stars.

I can't believe they kicked Mario off!


But Vibe has so much more to offer than breakdancing. He has...the ability to offend more people than the all-Spanish Blue Beetle discussions?

I can't believe Blue Beetle has yet to meet Vibe in some kinda time-travel story.

Vibe should come back in Ambush Bug: Year None.

I can't think of any other DC story that might actually be resolved by a break dance contest.

I feel this is the best place to put this news!

Someone heard your plea! I'm sure it's not an April Fool's joke or anything!