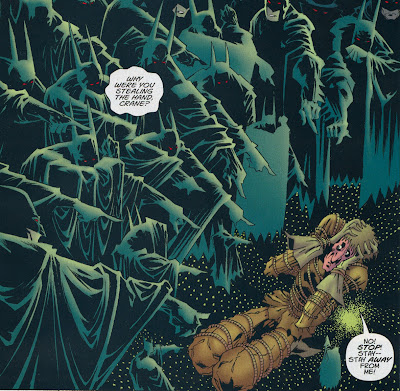 That's some scary stuff, right there. Those little Batmen just freak me right the hell out.


Here's the interior of the Batcave, missing some details and slightly lopsided, because I'm not all that great with a scanner: 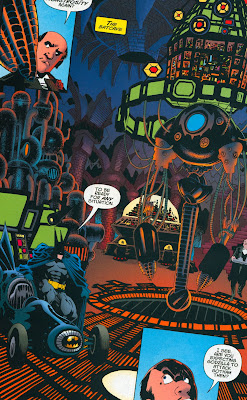 I like the cathedral-like feel to it, the gothic and baroque look of the technology, and the way some of the science-y looking stuff looks more like stained glass windows.

Also, this compares quite favorably to the Batcave we saw in Grant Morrison and Tony Daniel's Batman this week (I didn't bother to scan it, but there's one panel in which Batman is perched upon some kind of smooth metallic pyramid that doesn't make any sense at all until you turn a page and realize Daniel was apparently trying to draw a metal precipice of some sort). In the background, you can see the foundations of Wayne Manor. It's exaggerated as all get-out, but the architecture works...at least in a way that's consistent with Jones' aesthetic. Would those columns bear the load of a mansion? I don't know, but they look like ones that conceivably could, and that's all that matters.


The bat-computer looks like something that scary organ music should be coming out of: 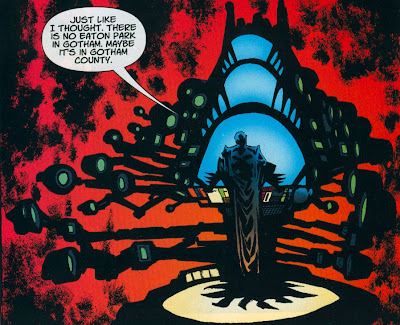 It looks pretty hard to use, too: 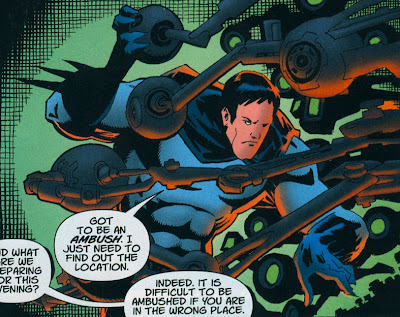 Here's the drawing of an exterior I mentioned in my Weekly Haul review of the issue. 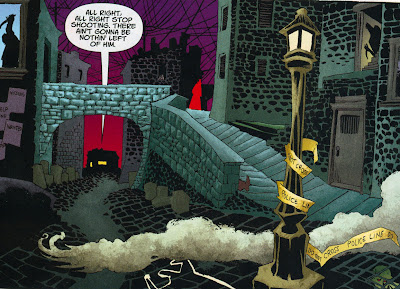 I love how much is going on in this panel (which I've badly scanned), and the amount of wires in the sky especially.


Here is the biggest goddam cape I've ever seen: 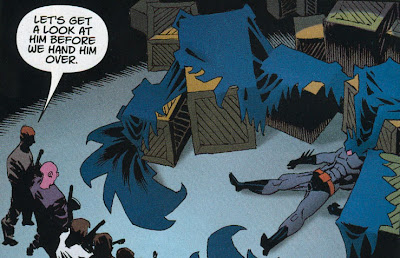 Look at the size of it! Imagine how inadequate Spawn would feel if he were in the same panel as Jones' Batman. Jones has always drawn a big cape on Batman, usually somewhere between the length of a bridal train and the length of a freight train, but it just seems to get bigger and bigger. By the time #12 of this series comes out, they mave to do a six-page fold-out like Jim Lee's All-Star Batman Batcave scene just to fit Jones' cape into the issue.

Finally, a detail that may only be of interest to me and whatever north east Ohioans and western Pennsylvanians happen to read this blog. When I first moved to Pennsylvania in the late-nineties, I used to sometimes hang out at a chain restaurant called Eat'n Park, which was your basic Denny's-like, breakfast-at-all-hours chain cafe type place. In general, they tend to look like this: 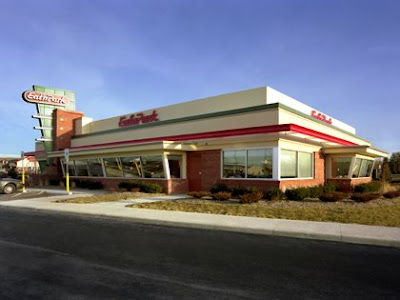 The climax of this issue takes place at a place called Eat'n Park, and the Gotham location isn't nearly as nice: 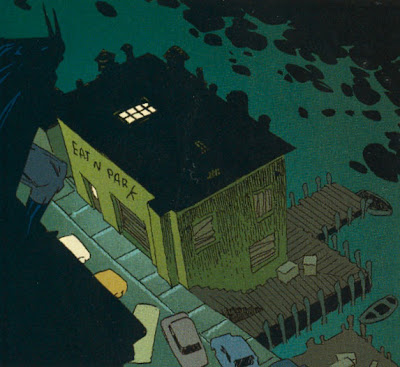 I've read a couple of reviews of this issue that mention the tiny Batmen(actually, they might both have been from this site, but I can't be bothered with browser histories), but it looks like that might be more of a screwy-perspective Bat-crowd rather than a variable-size bat-crowd. The lower left Batman is largest, while the Wee little Batmenlets closest to Crane are smallest. I think he's seeing a huge crowd rather than several tiny Batmen.

This is in response to an older entry you wrote about the upcoming Spirit movie. Frank Miller defends the black look:

“In tests — and we did several — the blue made the Spirit look like an unfortunate guest at a Halloween party,” he writes. “Going to black brings back his essential mystery, his Zorro-like sexiness. It also makes that red tie of his look very, very cool. So I made the call, with all respect to Eisner’s creation, and most importantly, to what I perceived as his underlying intention. It was an easy call for me to make. The Spirit dresses in black, and looks much the better for it. As I said, my desire was never to slavishly follow the rules of ’40s printing into campy oblivion, but to reintroduce Eisner’s creation, via modern technology, to our brave new world.”

Also, "After a brief overview of the comic-book printing limitations that traditionally meant everything intended to be black had to appear as blue, Miller gets down to brass tacks."

Wait a minute. I've seen that "Eat'n Park" before.

I've got it! It's the World's Ugliest Bank!