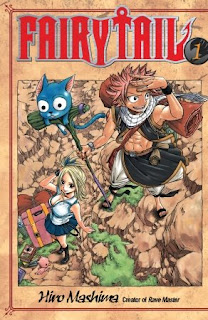 The art and designs in new series Fairy Tail struck me as super-familiar as I was reading through the first volume, seeming quite similar to those of Eiichiro Oda’s One Piece. It wasn’t until I flipped back to the “about the creator” page in the back that I realized that the author Hiro Mashima as the person responsible for Rave Master, the extremely popular series that I couldn’t really get into, despite trying the first few volumes (and I liked the art and character designs a lot too).

I suppose the fact that this is the work of the creator of Rave Master would eventually have become obvious by the point in which a Rave Master character is introduced. That shivering, snowman-headed dog that says nonsense words that begin with the letter P (or at least a creature that looks exactly like it) joins the cast near the end of this first volume.

I imagine fans of Rave Master will love this. As I said, I was pretty apathetic to Mashima’s previous manga, but didn’t mind this one at all, and probably wouldn’t mind reading future volumes, although it’s not a series I’d go out of my way to get a hold of or anything, as it’s a somewhat straightforward fantasy role-playing inspired type of book, featuring more or less stock character types.

Our heroes are Natsu, a spiky-haired, thick-headed, deep-stomached, magic-using dragonslayer whose only weakness seems to be motion sickness; Happy, a talking bipedal, big-headed cat with a somewhat blank, pleasant expression on his face at all times (and the ability to grow wings when needed); and Lucy, a buxom magic user who can call monsters based on the zodiac to her aid and whose dream is joining the renowned wizard guild known as Fairy Tail.

I have no idea why they’re called that.

It turns out, Natsu and Happy belong to the Fairy Tail guild, and are able to introduce her to the colorful characters—each with a specialty and weird character trait—after their initial adventure battling a sort of pop star wizard who is actually in the slave business.

The world Mashima creates is an odd amalgam of Dungeon & Dragons-style fantasy, with video game-like RPGs and our own modern society. There’s enough action to keep it from ever devolving into a full-on slapstick comedy, but enough comedy to keep it from being a boring genre exercise.
Posted by Caleb at 7:46 PM