Batman and Black Canary are both superheroes and Justice League members, they’re both into martial arts, they both like the colors blue and black, and they’ve both named themselves after flying animals.

Despite all the things they have in common—and despite the fact that Batman likes hanging around with people named after birds, and Canary likes wealthy playboys who fight crime on the side—I don’t think they’ve ever hooked up.

Have either of them even considered it? For the answer to that question, we’ll have to turn to 1970’s The Brave and The Bold #91, a Bob “Zany” Haney and Nick “Arty” Cardy story entitled “A Cold Corpse for The Collector.” 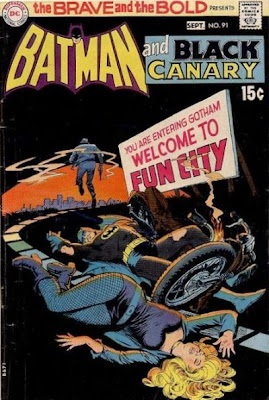 In a dark, smoke filled room, a quartet of cigar-chomping Gotham crime bosses show a film strip to two special guests. The film, taken with a telephoto lens, shows Turk O’Hare, gangster Rhymer’s “top goon” double-crossing their own guy Waxey Till. O’Hare was supposed to pay Till off, but instead he bumped him off, and kept the dough.

They’re contemplating going to war with Rhymer, but want to hear from the experts they’ve gathered—mysterious enforcer The Collector and…Batman? 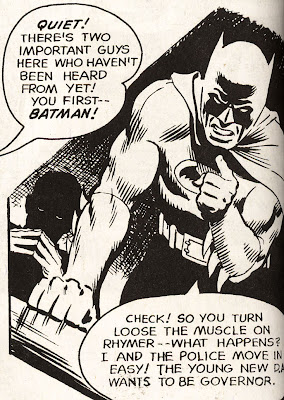 What’s the Batman doing advising these criminal types? The Collector explains the set-up to us confused readers: 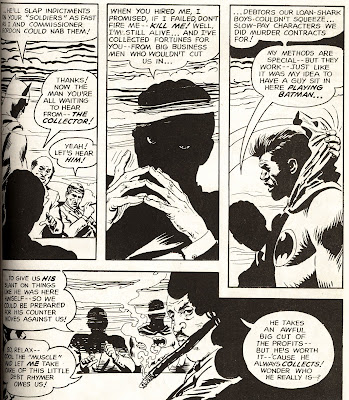 Shortly afterwards, the real Batman is on a boat with Commissioner Gordon, fishing Till’s body out of the Gotham River. As the World’s Greatest Detective does Commissioner Gordon’s goddam job for him as always, a patrolmen informs them of a stowaway—sleazeball private eye Larry Lance, who was watching Till for a client he won’t name.

Batman and Lance compare notes, with Batman noting this murder is likely to draw The Collector out. The two decide to work the case together.

Meanwhile, Lance returns to his shabby office, only to be greeted by a knockout pair of gams… 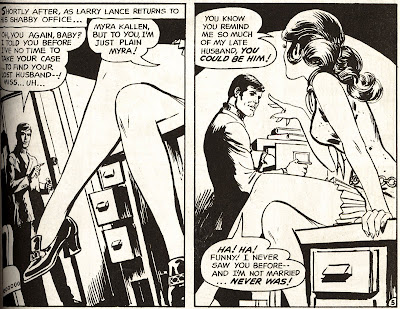 …although he’s rather unimpressed by the beautiful dame who apparently broke into his office just to wait for him. Another panel of Cardy drawing her figure, and a thought cloud reveal the true identity of “Myra,” which Haney then goes on to explain, and let us hear the thoughts of, so we can see her plans for the near future:

Huh. I guess that’s one way to try and get a guy to love you. State your feelings as simply as possible—“I like you… I like you a lot!” and then kiss him.

Lance has no time for love though, and he leaves Dinah/Myra in his office, while he works on his case.

At an illegal gambling casino, O’Hare is blowing his ill-gotten gains, only to be killed by the disguised Collector. Batman’s on hand, and thinks he nabs the Collector, but it turns out that he actually grabbed Lance instead, who was also on scene trying to catch The Collector.

As the two discuss the events of the night, Lance’s stalker Black Canary appears: 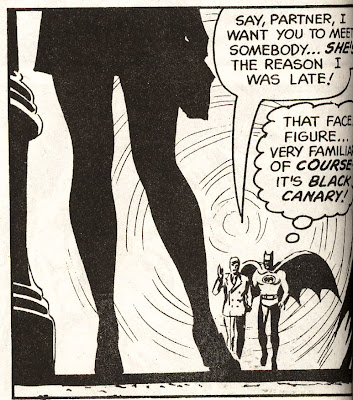 Note how Batman identifies the disguised canary by her “face, figure” from, like, fifty paces on a dark night. Obviously Batman’s been spending a lot of time studying both at Justice League meetings.

Batman doesn’t let on that he knows Myra is really Dinah Lance in front of Larry, and immediately figures out what she’s up to: “She must’ve fallen for this Larry, who resembles her husband back on Earth Two!”

Once Larry leaves, Batman tries to talk her out of pursuing Larry. 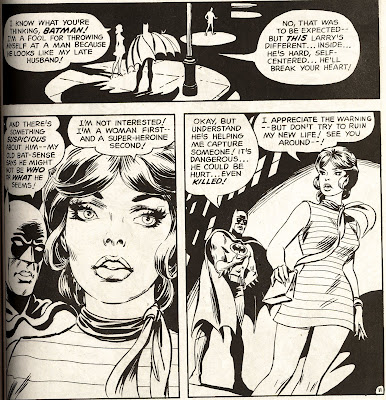 I like the dickishness of Batman’s response in the first panel, implying “No, your foolishness was to be expected.” And in the last panel, Black Canary shows the emotional maturity of a junior high student. “You’re not my dad, Batman! Quit ruining my life! I’ll be in my room!”

The very next moment, Batman nearly falls victim to the old exploding-newspaper-bundle trick; the only thing to save him was the concussive force of the sound effect “WHREEEOOWW.” 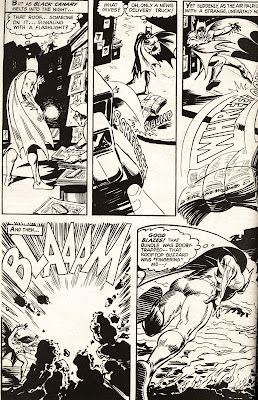 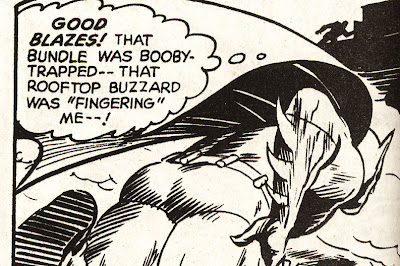 Whew. Made it. Okay, so that “WHREEEOOWW” was Black Canary’s sonic powers, referred to throughout the story as “the sonic whammy.” She had time to change clothes and wigs and get on her motorcycle before coming back to save Batman, too. 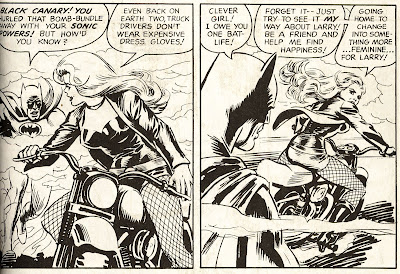 In thanks, Batman offers her one Bat-Life, but she’s in no mood to collect this mysterious prize, having to go change into something “more feminine….for Larry.” Considering that she’s already wearing lingerie, I can’t imagine what this will be.

After Larry gives Batman a tip that leads him into a firefight that nearly claims his life, Batman begins to suspect Larry might be working for the collector, and confronts Black Canary about it.

Naturally, that dizzy dame won’t hear any of it. Larry arrives to hear the tail end of their argument, which culminates in this sweet panel on the right: 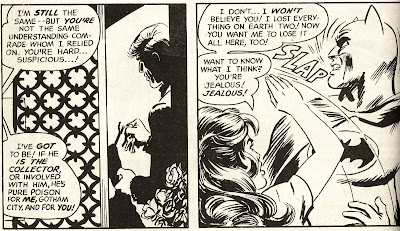 And while Canary screaming “You’re jealous! Jealous!” while slapping Batman makes for a pretty good panel, it’s immediately surpassed by the perfect melodrama of the very next panel, in which Batman slinks away without a word and Canary throws herself on her bed to cry.

In walks Larry to comfort her, and propose a team-up of their own.


Meanwhile, Batman went right from his face-slapping to a city-wide dragnet in the hopes of smoking out The Collector. In the backseat of a car, he broods: 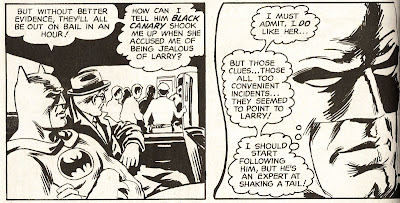 When Larry provides evidence against all the hoods Batman and Gordon rounded up, it convinces Batman that the P.I. isn’t The Collector after all, and then when Larry gives him another tip, he follows it to a mostly deserted racetrack.

Suddenly, a sonic blast throws him to the ground! He’s been blindsided by Canary! And then Larry emerges, training a pistol on the helpless Batman. Realizing what Larry really has in mind, Canary seeks to intervene. 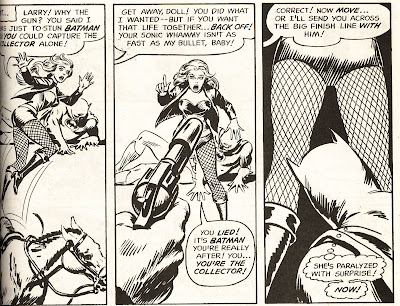 Batman kicks the Girl Gladiator from behind, knocking her out of the path of the bullet, and disarms Larry with a well-placed Batarang.

Larry seeks to escape on a nearby horse, and Batman and Canary give chase: 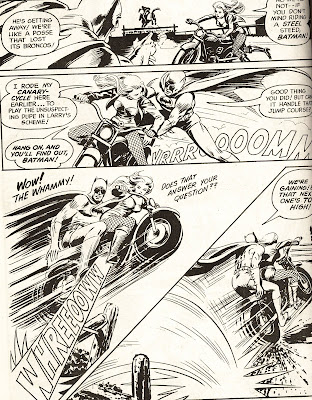 Is Batman supposed to be thinking “Wow! The whammy!”? Or is he shouting it out loud?

Whammy-vaulting is one way to get a motorcycle over a fence, but there’s another way, too:

The knife fight in the water ends with Larry apparently accidentally stabbing himself to death. Which seems a little suspicious if you ask me.

Canary realizes she was being a love-sick fool and that Batman was right all along. She gives him a perfect opening to ask her out, to which he replies with a pretty smooth line: 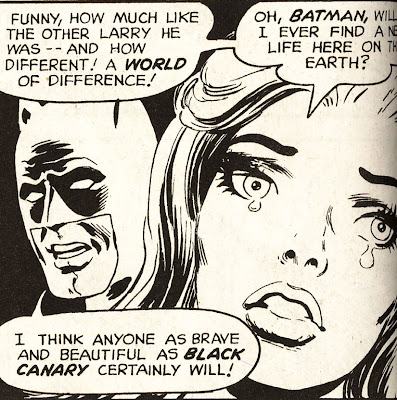 Nice move, Batman! Now all you have to do is seal the deal by…

…making a lame-ass joke, and laughing at your own lame-ass joke in that awkward, slightly creepy “Ha! Ha! Ha!” laugh?!

Well, you blew it this time, Batman.

I wonder why those two never did end up getting together after this? 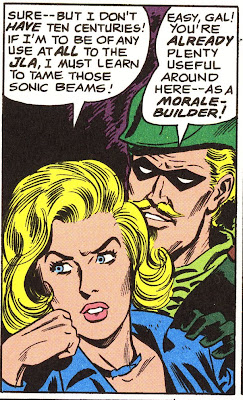 I've got to point out, Dinah kissed Batman in one issue of Birds of Prey...I forget which one, but it was during Simone's run, and in All-Star Batman and Robin they've definitely hooked up.

This was hilarious. And it isn't too often that you get a really good butt-shot of Batman. Stupid cape.

Yeah, Dinah plants one on Batman in Birds of Prey, much to the astonishment of Huntress, I believe. When she asks her afterwards what it was like, Dinah says that it was a bit like kissing Dracula. Haw!

Good stuff. I must say the art in this was fantastic.

"Morale booster," geez. Didn't DC let any women read these things before they went out?

Yeah, Dinah plants one on Batman in Birds of Prey, much to the astonishment of Huntress, I believe. When she asks her afterwards what it was like, Dinah says that it was a bit like kissing Dracula.

I believe she actually told Huntress that it was like kissing a principal, which is much, much more disturbing. It was the issue where Black Canary totally whips the hell out of Deathstroke after the huge build-up Slade received in the wake of Identity Crisis that made him look like the ultimate bad-ass, and before her boyfriend Green Arrow later beat Deathstroke in his OYL series. Somehow, the fact that Green Arrow's girlfriend had already beat the hell out of Green Arrow's toughest opponent ever kind of got ignored.