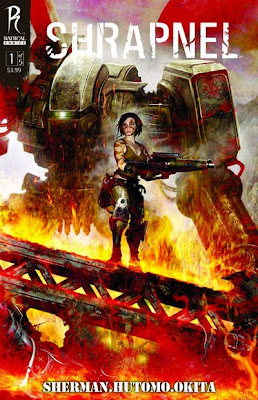 Sometimes high production values can actually do a disservice to a comic, at least in the cases of comics that aren’t actually very good. But when the production values are high, the paper glossy and expensive looking, the lettering expert, the package professional and well-designed and the artwork painted (or painted-looking), it certainly raises one’s expectations, so that if they’re dashed, they seem to get dashed harder than they might if the comic looked as poorly put together as the story and the skill with which its being told.

Shrapnel: Aristeia Rising is a five-part miniseries from Radical Publishing, the new-ish publisher responsible for Hercules: The Thracian Wars and Caliber: First Canon of Justice.

Like those efforts, Shrapnel looks great and has something of a high concept, albeit not one as unusual as Caliber’s “King Arthur set in the Old West.”

In the future, wars will indeed be fought in big, mechanical battle suits just like decades worth of anime had predicted. I believe the word for them is “mechs,” although in this book they’re referred to as “armour.”

The solar system has been more or less populated, by humans presumably all from earth. But “human” means something a little different in this future, as genetic engineering became a reality. “Genotypes” or “Splicers” are the upper class of humanity, those whose parents could afford to be selective in their genetic traits. Everyone else—i.e. people like us—are called “Helots,” and they have menial jobs like garbage collecting and asteroid mining, which is what the characters who seem to be the protagonists do.

I say think because the point-of-view is somewhat indistinct, and the storytelling fairly confused. The book opens with a ten-page battle between a bunch of these battle mechs, using huge machine guns and sonic swords. Someone unidentified is narrating.

On that tenth page, we learn that it was all just a simulation that the marines were involved in. Then we change scenes, zooming in to a bar in a futuristic city in a dome on a planet that isn’t Earth (by book’s end it’s clear that this is actually Venus). As we’re zooming in, the narrator has gone and won’t return; a pair of people are having a conversation we “hear” over the panels doing the zooming-in, each in a different color-coded narration box, Brad Meltzer-style.

This is where we meet our trio of Helot heroes, two ready-to-fight men and Sam, a woman with a mysterious past (including impressive, military-like instincts that she claims to be unaware of).

Meanwhile, the marines visit the president and ask him to surrender his planet—Venus, not Earth—and since he does not, Venus prepares for war, even though they’ve no real army and will likely be slaughtered by the marines. Sam wants to run, her friends sign up, and it ends in another big mech battle, this one clearly between the marines and the Venusian volunteers, who are fighting for freedom.

The credits are reminiscent of the old Virgin Comics credits, with creators who aren’t actually the writer or artist credited. Here, Mark Long and Nick Sagan get top-billing as creators, while an M. Zachary Sherman is the credited writer, and Batus Hutomo the artist. There’s a colorist, Leos “Okita” Ng credited as well, which makes me a little curious about the exact process: The book looks fully painted in most panels—there are a few featuring spaceships or building exteriors that look computer-y—but if a colorist is also credited, then I assume Hutomo didn’t paint the art, or at least not in its finished form.

That art is really nice, by the way, but it doesn’t work as it should. The individual images all look nice, if dark—battlefields, space, spaceships, bars, bunkers, no scene is set anywhere with any decent lighting—but they don’t move right, or synchronize with the dialogue.

The opening battle is confusing, and there are few clues within the design work to indicate where anything is taking place: There are dark, futuristic looking places on every page, but there’s nothing to distinguish the inside of the Octagon (Venus’ eight-sided equivalent of the Pentagon) from the Sam’s quarters, for example.

Worse, there are often times too many words for a single image. A panel will show a marine drill sergeant-y type yelling, his mouth open and his lips contorted to pronounce a particular word, and yet four bubbles of dialogue come out. Two panels later, two marines are illustrated making a similar face, shouting “OO-RAAAH!”, yet seven sentences worth of dialogue are spoken by another character off-panel, while their faces are apparently frozen like that.

Is this nit-picky? I suppose. If these were the only two panels like that, they might not need singled out, but they’re not; time doesn’t quite flow right in many of the panels, and that’s a big problem for a comic book. No matter how good the component writing and art are, if they don’t work in harmony, the comic doesn’t work. These don’t, and thus the comic doesn’t.

Even still, $1.99 gets you the first, 48-page, practically ad-free issue, and God knows there are much worse, much shorter books you can buy, and pay a lot more for the privilege. More info, including a more clear summary than what you’ll find in the book, can be found here.
Posted by Caleb at 7:41 PM