Well, at least they're not smoking... 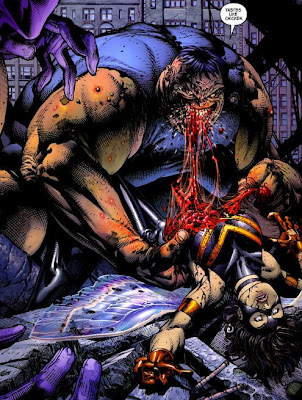 (Image from Ultimatum #2 by Jeph Loeb, David Finch and Danny Miki; I found it at Dirk Deppey's Journalista and cut and pasted it from there because, you know, who buys and reads Jeph Loeb comics these days?)
Posted by Caleb at 1:17 PM

Not me, that is for sure.

And with one panel, you get a perfect microcosm of everything that's wrong with the Ultimate Marvel Universe. What started out as an interesting idea has become stale, predictable, and grotesque. It's like, everything is the same, only it's more extreme. That's not just the regular Wasp, that's the foulmouthed Asian mutant Wasp who sleeps around and is also a brilliant scientist. And this Wasp didn't just get slapped once by Hank Pym. No, he beat the shit out of her on more than one occasion. Because that's... EXTREME.
And that's not just the regular Blob who's fat and immovable. That's the Blob who's fat, immovable, and also eats people while making lame jokes about it. Because that's... EXTREME.
Ugh.

who buys and reads Jeph Loeb comics these days?)

Given the sales numbers on this, Hulk and Ultimates 3? Lots of comics fans sadly...

That's the Blob who's fat, immovable, and also eats people while making lame jokes about it.

Goodness, looking quickly I thought it was supposed to be the Hulk.

I have found, as I get older and have been burned too many times, that my collector mentality has faded and I am trying to be a more discerning comic book reader...

I am glad to have sat this one out.

Totally agree that if the price of a continuity free universe is a cannibal Blob, a gay Colossus a terminally pissed off Captain America and Magneto killing Xavier then they can have it. Ultimatus is the junkiest thing to come from the Ulitmate Universe from a section that just released Ultimate Origin. To say that I have been underwhelmed is an understatement. Only Ulitmate Spider-Man works beause the concept was always strong. Any title that could survive the Clone Saga and Mephisto's Deal has many stories still to be told. Ultimate is just lazy.

"Goodness, looking quickly I thought it was supposed to be the Hulk."

No no no. Ultimate Hulk would have raped her then cannibalized her.

Ugh. I really want to like and purchase the Ultimates stuff, because it's hard to just out of the blue start buying Avengers comics. Should I buy the Essential or the Masterworks editions and start at the beginning? Should I pick up Busiek and Perez's run as a jumping on point, even though my 80s Marvel knowledge is pretty weak? I don't know where to start reading. Marvel decided that it'd be great to start an Ultimate Avengers comic so guys like me could get in on the ground floor.

Unfortunately, no matter how good some of it looks, I'm just not interested in reading about asshole Captain America and Rapist Hulk. I can't tell you how many times I've been in a Borders, not found much to buy in the comics aisle before making my way to the "U"s, then pulled an Ultimate book off the shelf, flipped through it, and put it back.

Given the sales numbers on this, Hulk and Ultimates 3? Lots of comics fans sadly...

Oh yeah. I keep forgetting about Hulk. Lots of people seem to like that one, too...

I don't know where to start reading.

The Marvel Universe Avengers are a real tough sell, since they've been so tied up in larger, universe-wide plots for years now (And soon there will be New, Mighty and Dark varieties...plus The Initiative).

The only MU one I'm still reading is Avengers: Initiative which isn't really an Avengers title so much as Whoever Slott and Gage Want To Use (including some Avengers) branded "Avengers" for sales purposes.

I'm a big fan of Marvel Adventures Avengers, which is basically a compromise between the idea for the original New Avengers team (Marvel's JLA) and an Ultimate take (easy to follow, continuity-neutral stories for newbies). Any of them by Jeff Parker and/or Paul Tobin have been a blast, though they tend toward comedy over super-sturm und drang.

I didn't/still don't have too deep of a background knowledge of the Marvel Universe, and I was able to follow along with the Busiek/Perez run in trades from the library just fine. Busiek did a pretty fun time travel series with Pacheco (I think) too...Avengers Forever or something like that...

Busiek, Stern, and Pacheco did Avengers Forever, and it's the best Avengers story I've ever read. It's insanely continuity heavy, and it was the my first story too. I didn't get the references, but I was intrigued by them.

The Marvel Universe Avengers are a real tough sell, since they've been so tied up in larger, universe-wide plots for years now

With the exception of Secret Invasion, I haven't really been following the universe-wide plots that the New Avengers title has been tied to, and I haven't had a problem following the title in trade. As long as you know kinda peripherally what is going on, I think you're fine. I haven't read Mighty Avengers yet, but I think that is probably similar. I've only read the first Initiative trade so far (number 2 on the way), and it was fine, too.

That said, I enjoyed Busiek's run. Getting those in HC is recommended.