Please enjoy this rambling 2,438-word post that is eventually about pornographic comic books by Colleen Coover and Brandon Graham

Last week it consisted only of Alan Moore and Melinda Gebbie’s Lost Girls, the over-a-decade-in-the-making epic that imagined real world inspirations for Peter Pan’s Wendy, The Wonderful Wizard of Oz’s Dorothy and Alice’s Adventures in Wonderland’s Alice and wove a remarkably complex narrative in which their paths cross and they do it with each other quite a bit, while sharing stories of their past sexual exploits, most of which are reverse-engineered by Moore and Gebbie from incidents in their real-world fictional exploits.

Of course, pornography is a notoriously difficult word to define, which is probably why it does have such negative, unhealthy connotations, and why Moore and a few other talented folks attempted to keep the label attached to works of their that obviously have a great deal of merit to them besides the amount of attention focused on fucking.

The definition that most sticks with me is the famous one offered by Supreme Court Justice Potter Stewart—“I know it when I see it”—in large part because of how broad it is, and how scary such broadness can be now that we live in an age where technology has begun to blur the lines between documentary representation (photography, film) and fake images that look real (digitally altered photography and film), which, in turn, motivates those rightly opposed to child pornography to over-define what’s dangerous (Er, not to open that can of worms again; but I will come back to that point sometime in the near future).

But never mind what Stewart says; I’ve always assumed “pornography” to refer to a visual work that was created for the specific, primary intention of causing sexual arousal in its audience, something usually rather easily discerned by the ratio of doing-it to not-doing-it in it (That is, a 90-minute film with two five minute sex scenes—even extremely graphic ones—isn’t pornography, but a 35-minute film with six five-minute sex scenes probably is). But that’s just me restating “I know it when I see it” as “I know it when Isee it. “

Wait, let’s see what Word’s dictionary says: “Films, magazines, writings, photographs, or other materials that are sexually explicit and intended to cause sexual arousal.” Huh. Word’s definition is on the broad side, too…

Now at the risk of over-sharing, I’ve never been much of a pornography consumer.

Not out of prudishness or moral objections—although Olivier Assayas’ 2002 film Demonlover did convince me to swear all forms of pornography off as morally objectionable for a good six months or so after seeing—as much as the simple fact that I simply didn’t get old enough to actually be a pornography consumer until after the scientists had perfected the world’s best source of porn-delivery: The Internet. Why on earth pay actual money to a convenience store clerk for some extremely expensive magazine with pictures of naked ladies—money that could just as easily be spent on comic books—when you could just type “pictures of naked ladies” into a search bar for free, you know?

Over the past month or so, I’ve been thinking a lot about comics-as-pornography though, relating specifically to a few depressing rulings on the matter from courts in Australia, the United States and England, and some of the asinine conversations I’ve been drawn into online about whether drawings of sex acts are the same as photographs of sex acts, and if drawings of children involved in sex acts should be treated the same as photographs of children involved in sex acts. (Again, not trying to re-open that can of worms at the moment, although if anyone would like to explain why those things are equivalent using something other than a variation of because I said so or because I think it’s gross or because child abuse exists in the world, I’m all ears).

And that’s what lead me to seek out a couple of works of self-proclaimed comics pornography (See, the last 745 words? All an introduction leading up to this point! This is the unfortunate difference between my blogging and my writing for pring; here I will literally go on forever because space is unlimited and I don’t stop to edit myself and no one else is here to edit me. I’m honestly surprised that anyone skims, let alone reads this blog with posts like this. Hell, I wouldn’t read 6,000 word posts with 800-words before we even get to a freaking point of any kind).

Of course, I was somewhat interested in these works already, given that they happen to be the work of some of my favorite comics artists: Colleen Coover and Brandon Graham. 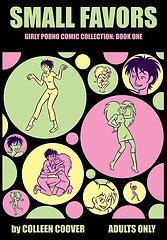 Considering the fact that Coover has since become so well known for her more all-ages work, like the Oni series Banana Sundays and her back-up strips and other contributions to Marvel Comics (particularly within their Marvel Adventures line), it’s both kind of exciting and extremely weird to be reading Coover-drawn pornography.

Her style has changed since Small Favors, getting slightly more simplified and confident (and less obviously influenced by manga and Los Hernandez Bros), but throughout the book the artwork is clearly the product of the Banana Sundays and Marvel Adventures artist. There may be more lines and details, particularly at the beginning (and any time there’s a close-up drawing of a vagina which, given the subject matter, is fairly often), but by the end of the volume, the girls are quite definitely the Coover girls we’re used to seeing, as are our heroines on the cover (Which is the only image I’m going to be able to share; I use a public library scanner, and I’m pretty sure the public library doesn’t want me scanning drawings of vaginas).

While Nibbil’s only a few inches tall, leading to some predictable (as well as some charmingly creative) sex acts, she can also grow to full Annie size, for more vanilla lesbian sex (With vanilla being here defined as not involving being spanked with uncooked spaghetti or taped spread eagle over one of Annie’s breasts).

As such, it lacks much in the way of a narrative thrust (hurr hurr) and there isn’t a whole lot of suspense to any of the sex, Annie and Nibbil start coupling immediately (and the few other characters who wonder through do likewise). Given that, it’s kind of surprising how warm and even romantic the relationship between the two is, as is the fact that Coover’s even able to give the characters distinct and realistic personalities.

That may not seem like much of an accomplishment—shouldn’t all comics be able to do that?—but since the book consists entirely of sex scenes, naughty gags and occasional naughty gags during sex scenes, it means Coover is quite definitely using the, um, action scenes to define the characters while never shirking on the prime intent of the book.

How titillating any of this is will likely vary from person to person, some of it is kinda weird, and some of it made me squeamish (Perhaps its because I don’t have a vagina, but I found myself flinching repeatedly at the things that would end up in Annie’s). It’s certainly pretty creative though, as seen in the story where Nibbil becomes self-conscious about the readers viewing them through the fourth wall, or the one-page gag strips and ads for the series. 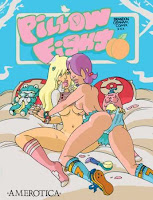 It’s…well, it’s not really all that good.

It’s definitely the work of Graham, and bears all the hallmarks of his work. The female figures all have the shape and texture of balloon animals—you can practically hear that balloon-on-balloon sound when they rub together—as well as the soft, round lips and cool clothing choices of the Graham-designed women in his other works. The black and white layouts are rather manga-like, the lettering is Graham’s distinctive style, the images are all packed with little idiosyncratic product designs (though less and less inspired than in King City or Multiple War heads) and some of the dialogue has the playfulness of his other work, and yet this is pornography, more hardcore than Small Favors (perhaps due in large part to the fact that there are men in this as well as women) and the characters are much less developed, let alone distinct from one another.

The album format book opens with Jem arriving at her new boarding school, where she was sent after her parents caught her doing…something pretty bad with some people, which will be explained by the book’s end, but is at first just hinted at, with plenty of gross metaphors I don’t feel like typing.

There she meets her new roommate, whose name is “Deforest K-Y, but everyone just calls her by her nickname.” This is one of the several jokes Graham packs into the story, which, along with his design sense, helps keep it from being 100% doing-it.

Jem follows a map provided by Bones—her roommate’s nickname—and finds a peephole leading from one locker room to the next. In the next, she sees Bones having five pages of pretty graphic (penetration shots, liquids, etc) sex with “the whole foose ball team”…which is just two guys.

There’s some mildly amusing pop culture talk among all the graphic sex, like one of the girls who prefers girls talking about cock is her kryptonite, and then starts listing the various effects of various spectra of kryptonite cock (“Wow. She’s so out of it she’s speaking in nerd”), but certainly nothing worth justifying the rest of the book.

Also, despite the title, there isn’t any actual pillow fight in the whole book.

(Note: I will try very, very hard to resist succumbing to Blingee addiction the way I did Obamicon addiction last week, but I can't make any promises; if I fail, blame Kevin Church, whose post inspired me to try and liven up old Justice Stewart's boring black and white photo with a little much-needed bling)
Posted by Caleb at 8:04 PM

I honestly cannot believe the smut that qualifies for "blogging" these days. What happens when children visit this blog, looking for posts on the latest adventure yarn by Geoff Johns? They'll be subjected to a discussion of pornography, including pornography written by the British. For shame Caleb. For shame.

Caleb, I see you've put a lot of thought into this.

Graham's adult books have never clicked for me. The roommate loves them, but he's an ass man. Small Favors was actually where I first found Coover's work. Love the series a great deal...

I own Small Favors, and I love it. And I often get to recommend it to my friends.

Weird. I liked Pillow Fight so much, I found his mainstream stuff.

The worst part is you can't get a complete story in one issue anymore. You have to wait until the whole series comes out to find out how it ends.