On Wednesday the long-awaited (by me) Batman: The Brave and the Bold series debuts, based on the new Batman cartoon of the same name, which I've only seen one episode of, but totally loved.

The cover looks pretty great, and is triply great if it presages all the team-ups that writer Matt Wayne has planned for future issues. But there's at least one DC star not exactly looking his best on it. 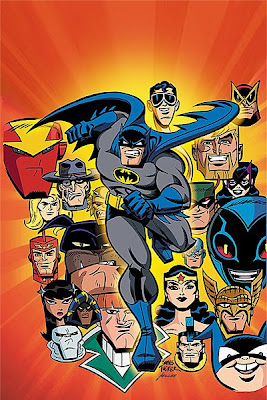 See the tiny little head between Wildcat's jawline and the edge of Guy Gardner's bowl cut? The fellow with brown skin and what looks like a hood striped with lightning bolts? That's gotta be Black Lightning, right? He's black, he has a lightning motif going on, and it would be weird if they included Static or Black Vulcan on the show instead of Black Lightning. Plus, he's posed next to fellow Outsiders Katana and Metamorpho.

It's only a head shot, so maybe the rest of his costume looks totally ace from the neck down, but I'm not feeling what I see of it so far. Looks an awful lot like Cloak from Cloak and Daggers hood, only with lightning bolts instead of black stripes. Actually, my first thought was the sort of robe a boxer might wear into a ring, or something from a community theater production of Joseph and the Amazing Technicolor Dream Coat where the budget only allowed for two colors in the dream coat.

At any rate, there's one more reason to look forward to the series—to see how they redesign Black Lightning's costume.

UPDATE: The comments section sets me straight on what B.L.'s costume looks like in the show, which he's apparently already appeared on. There's a link to an image of it in the comments as well.
Posted by Caleb at 5:31 PM

They've had Black Lightning on the show. What he's wearing is actually a hooded sweatshirt, and he's high school age, so I assume if he shows up in the comic he'll look the same.

You've only seen one episode??? Watch the show! I've enjoyed every episode so far, although the "Enter the Outsiders" episode with Black Lightning and the rest was probably my least favorite.

"Enter the Outsiders" might not have been a great episode overall, but R. Lee Ermey was perfect as Wildcat.

Sweet, thanks for the info (and the pic). Patrick, I only get, like, four channels...isn't it on Cartoon Network or somewhere like that? I'm quite excited for the eventual DVD release though. The only one I saw was the Plastic Man on Dinosaur Island episode, which I found in a few pieces on YouTube.

I think they keep the most recent episode up at http://www.cartoonnetwork.com/video/

if you can stand watching them on the computer. It's a fun show, my roommates (who constantly ridicule my comic book obsession) even watch the cartoon. If you told me last year that they'd ask me "So who exactly is the Gentleman Ghost" and seriously wanted to know the answer, I would not believe it.

Caleb - Cartoon Network does keep the two most recent episodes up on their website (http://www.cartoonnetwork.com/video/index.html)

And now I see that Patrick just posted exactly the same thing. I'm of no use to you.

Interestingly, the current Black Lightening: Year One series, which started the week that episode was on TV, has him start out with almost the exact same costume (although he's not a teenager), and just this week in the second issue he upgraded to the one we're more familiar with (is kevlar, less shooty).