Who is the new Black Panther? And who cares who she is?

If you read any Marvel comics in the singles format, you've probably seen ads like this: 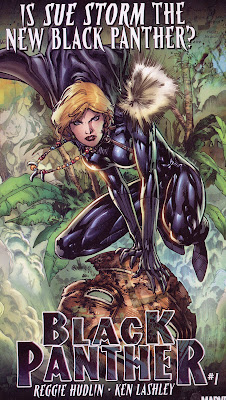 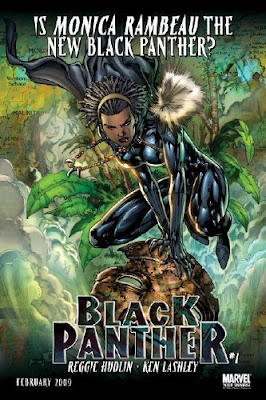 There's at least one other one as well, asking, "Is Echo The New Black Panther?" and featuring the head of the minor Daredevil character who was in a few issues of New Avengers cut and pasted on top of the female BP figure there.

See, when Black Panther gets relaunched next month—during Black History month, naturally—he will be a she. At least for a while. There's nothing really all that unusual, or even noteworthy, about a superhero being temporarily replaced by another secret identity.

In fact, it happens to just about every hero at one point or another. In some cases, like Batman or Captain America, it seems to happen on some sort of cycle. Heck, this isn't even the first time someone other than T'Challa took up the Black Panther mantle.

What I find interesting about this particular ad campaign, however, is just how random it is.

"Is Echo the new Black Panther?"

Who? Oh, the woman who wore a padded man-suit to be Ronin for a while. No, of course not. Why would she be.

Sue? No, of course not. Why would she be? She's not even in Marvel continuity until Mark Millar and Bryan Hitch finish their Fantastic Four run, is she?

No. Jesus; are you pulling these names out of a hat?

It's probably unfair of me to say that no one cares simply because I don't care, but I honestly haven't heard anyone outside of these ads discussing who the new lady Black Panther could possibly be. Perhaps I just don't know anyone who reads Black Panther anymore, or read any bloggers who are excited about the next volume of the title, or don't hang around the right message boards anymore (although I do spend significant amounts of each day at Newsarama).

I haven't read Black Panther in a while, although I thought writer Reginald Hudlin turned out some really great scripts during the time I was reading it—the first story arc with John Romita Jr. art, the surprisingly readable "House of M" tie-in, the whole "Black Avengers" arc—but lost interest somewhere around the FF tie-ins, thanks to a combination of ever changing artists and the casual approach to continuity (i.e. the refusal to acknowledge its existence).

But as far back as then—last summer, according to the Grand Comic Book Database—Hudlin was writing scenes in which T'Challa's little sister was questioning her big brother's leadership ability, and her friends were urging her to usurp his throne/position. So every time I see one of these ads, after my first confusion as to why they exist at all or why they're choosing the names and heads they're choosing, I think of T'Challa's sister.

I suppose Marvel could throw a real curve ball and have it be B.P.'s wife Storm, but it strikes me as a really odd and ineffective campaign to drum up interest for a title and a storyline where that no one's much interested.

But of course I don't actually know anything about marketing. For all I know, each of these ads will end up being a different variant cover for Black Panther #1 and it will sell 115,000 units in the direct market.
Posted by Caleb at 7:30 PM

See, I haven't read Black Panther since Civil War, but I assumed it would be his cousin who wanted to be Black Panther from Hudlin's first few issues.

But I do remember T'Challa giving Monica Rambeau a pep talk in the Black Avengers storyline about how she had so much potential, so maybe he turned his kingdom over to her or some other New Yorker.

It's totally his little sister. He's been planting seeds for her to become the new BP since the second arc.

I think it's going to be a pretty interesting arc, since she's pretty green.

It's a lame marketing scheme for people who haven't read the book, i guess. Anyone who has read it has had pretty much the same reaction you (and I) had-- "Uh, it's his sister. Duh?"

Cousin! Oh man, now I can't remember if I wrote "sister" and meant "cousin." Crap. I'm not sure how to check without excavating a long box either... damn.

I think I was thinking of the cousin. The girl who was underground in the Vibranium mine with Radioctive Man...? He doesn't have a little female sister and a little female cousin who want to replace him, does he...?

He DID have a male cousin who was taken over by an as-yet unexplained entity from the first arc who wanted to take his place, though. :)

For what it's worth, I read your whole post without realizing you conflated cousin and sister.

What's all this crap about T'Challa having sisters and cousins? The reason he's such a tragic and badass character is that he had to take over a kingdom when he was a kid and had no immediate family to confide in.

I know those words are English, but put together like that, they just make no sense...

I've also seen online the ads like that where it asks if those female assistants he has (I can't remember the name right now) are going to be the new Black Panther.

Seriously, the only way I'd be interested in reading this would be if Jason Aaron was writing. His Secret Invasion storyline over in Black Panther was top-notch, the way the character should be handled.

Monica Rambeau makes a decent amount of sense considering she was last seen in the Black Panther series in the Killmonger arc, just this past summer. I mean, of course it's going to be Shuri eventually. She's been groomed for it since the beginning of Hudlin's run. But who's to say that there won't be a large number of Black Panthers running around when the series relaunches? Maybe Storm and T'Challa will pull some strings and have a number of their friends running around in Black Panther costumes for some reason or another. I think these ads are a great idea. It's been fun for me, as a HUGE BP fan, to see so much attention directed towards the relaunch, if only by Marvel's advertising dept.

So does anyone care who is the new Black Panther? Yes, I do.

"What's all this crap about T'Challa having sisters and cousins? The reason he's such a tragic and badass character is that he had to take over a kingdom when he was a kid and had no immediate family to confide in."

Um, his mother was alive in the early Hudlin stories because Klaw took her hostage. Of course he has family. He's not Batman, I would imagine everyone in Wakanda can trace their family tree back to some ancestor in the royal family.(Though it is also kind of weird that the Wayne family had that giant manor with absolutely no relatives of any sort surviving to the present day...)

So does anyone care who is the new Black Panther? Yes, I do.

I saw the Sue Storm ad and scoffed. Why not have a Charles Xavier Daredevil or Katie Power Galactus? ;)

While I still wouldn't pay money for a Hudlin written Katie Power as Black Panther book I'd be tempted. After all she made a pretty mean Venom...

AND a fine Hulk.

No. Jesus; are you pulling these names out of a hat?"

This message brought to you by Lizard Zoom Sticks, for extra Pep!

i really and truly don't like the idea to knock off the first black superhero in the first place. T'Challa is the only panther that i knew and it should stay that way....okay so u have re-birthed CPT America and God knows that Superman has died millions of times. Let a hero that has never had his true moment step into a lime light of his own. We have a Black (male) President now.....so let the black man get back into his suit and let us go from there. i would love a black superhero to appear in a video game too...shooot. Let's change with the times people.

well lets see how the BET animated series goes....i will be tuned in to see where the Black Panther takes off from there...

Marvel did the same stupid thing with Secret Invasion. Why have ads (and covers) that are obviously not in the comic. It makes no sense. And if it does get new buyers, they are just going to be pissed off when the open the comic.