This is (actually) a graphic novel: Sara Varon's Chicken and Cat 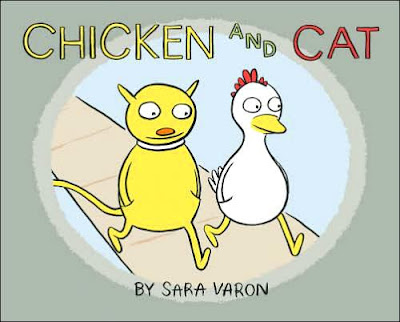 You are probably (hopefully) aware of the work of Sara Varon, whose Robot Dreams is one of the most heart-breaking comics I’ve ever had emotionally destroy me for an evening (Seriously, it’s right up there with Good-bye Chunky Rice in the How Can Something This Cute Be This Sad? department).

Are you also aware that she’s also broken into the children’s picture book maket, with 2006 book Chicken And Cat (Scholastic Press)? I was not.

Like Robot Dreams, Chicken and Cat deals with the subject of relationships, both the joys and difficulties inherent in them. Unlike Robot Dreams, it’s a much shorter, simpler and ultimately more optimistic story—one that ends rather happily, instead of coming to the fatalistic conclusion that life is like this, and that’s neither good nor bad, it’s just the way it is.

Also like Robot Dreams, it’s completely wordless, yet the thoughts, feelings and even words of the characters are hardly enigmatic. Varon is one of those extremely gifted artists who can take an extremely simply drawing and somehow—magic? Alchemy?—imbue it with clearly communicated, somewhat complex emotions.

Here, for example, is a picture of Cat, looking out the window at an empty lot sealed off by a chain link fence and nestled between a half dozen gray apartment buildings: 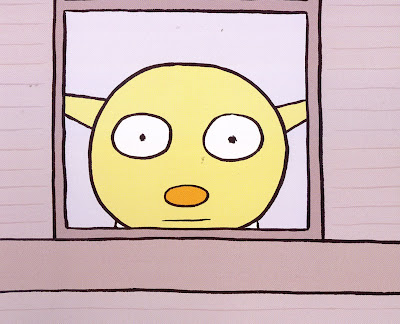 This is one of those interesting books that is probably technically comics, although it’s packaged, presented and (most likely) shelved with children’s picture books. It has the shape, size, general format and price point of a kids book, but the contents are simply a series of sequential images. Sometimes the illustrations take up the entire page, with the borders of the pages serving as panels, but a few of them are divided into actual panels, like this sequence: 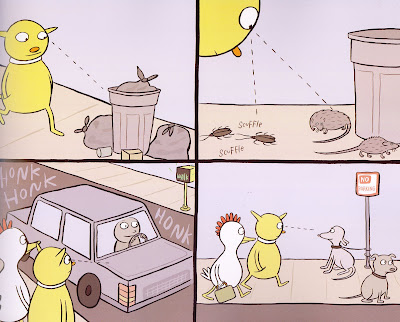 Cat has just arrived on a bus, carrying a suitcase, and is met by Chicken, who walks him/her/it to his/her/its (their?) apartment. Along the way, Cat notices some facts of urban life, the smile he/she/it had upon first seeing Chicken having evaporated into this expression. (Although in that last panel, Cat may be reacting to the fact that there are dogs that go about on all fours and wear collars and leashes inhabiting the same world that Cat and his/her/its bipedal friend Chicken live in. Varon’s city is kind of funny in that there are both anthropomorphic animals and humans—all around the same size and same peanut-esque shape—and normal animals who don’t walk upright, have thumbs or do human things).

Chicken and Cat spend the day riding around the city on their bikes and visiting the park, and then Cat goes to sleep in his/her/its won room that night (Cat seems to moving in with Chicken, rather than visiting).

The next day they take the F train to Coney Island, where they wear old-timey men’s bathing suits, and hang out at the beach. On the way home, Cat looks at an apartment with that look in his/her/its eyes again, and Chicken notices. So they go and buy a bunch of seeds, plant them, and turn that empty lot across the street into a garden full of flowers and vegetables. Now when Cat looks out that window, with Chicken, cat has the smile he/she/it had on when he/she/it first arrived.

Varon’s work loses nothing by appearing in such a large format. Most of the “panels” are eight inches high and ten inches across, and, rereading it to pay closer attention to her line work, I found the bigger size actually helps a bit. Certainly it makes her characters’ faces easier to read, probably a must given that this is geared towards the youngest readers (at least according to Amazon.com), but it also underlines how simple the artwork is on a technical level, which only makes it more impressive that it is as effective as it is.

Additionally, it really draws attention to the fact that the art is handmade—the dots that serve as the pupils in her character’s eyes, for example, are made with a tight, controlled scribble that keeps them from attaining a perfect orb shape—and only makes it all the warmer.

It feels kinda cheesy saying this—which is why I prefer talking about comics—but this really is a children’s book for all ages. Certainly little kids, less-little kids and grown-ups will all get different things out of it.

I’d certainly not hesitate to recommend it to readers on my side of their adolescence. I think it would probably make a good chaser to Robot Dreams. If Robot Dreams reduces you to tears and melancholy, Chicken and Cat’s brighter, happier ending might serve as a good pick-me-up.

I use lots of comics and graphic novels with my 4th grade class. They were excited when "Robot Dreams" got a DCF nomination this year.

Some of the class loved the book and others were not ready for the themes and ending.

I'll get this one on their radar soon...

Robot Dreams is freaking wonderful. I've got to check this out.