See, this is why I kind of love Geoff Johns: 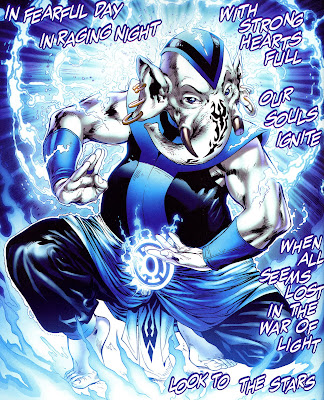 It takes a special kind of writer to create a Blue Lantern Corps when you've already got Green, Yellow, Red and Violet Lantern Corps running around.

And then, not only to fully commit to such a silly-sounding idea like seven armies representing the colors of the rainbow making war on one another in outer space with magic rings and bad poetry, but to go ahead and just make Hindu deity Ganesh a Blue Lantern as part of your rainbow war storyline in the Green Lantern comic book?

How can you not respect that kind of chutzpah?

The only other Blue Lantern so far is a fish-faced, George Lucas-esque alien who designates himself as a saint, so the Corps consists only of Space-Ganesh and either a space-Catholic or possibly a space-Mormon.

Will the BLC be nothing but alien versions of Earth religious figures and adherents? Ganthet, the Guardian of the Blue Lanterns, tells Hal Jordan he wants him to eventually lead the team, so will Geoff Johns' irrational love of Hal Jordan lead to him making Jordan into the one, true, capital-G god?

I honestly can't wait to find out.
Posted by Caleb at 4:24 PM

This is one of the reasons that I love the Green Lanterns. Because practically NO concept is too crazy for a bunch of Cops-In-Spaaaaacce!

Ha! I can't believe I didn't put two-and-two together -- Ganesh is a Blue Lantern! You're absolutely right!

I totally agree with your comments...I totally love all these mutli-colored lanterns and I have not idea why I do. From the outside it looks like the largest pile of rainbow crap to come down the pipe..like...ever...but that voodoo that Johns do has me under a spell and he has a spectacular body of work to back up any chances he might want to take now. Red raging kitties and blue elephants...its better than all the meds in the world.

In the pages of his Hawkman run, Johns introduced an race of inter-dimensional, elephant-headed beings along with a blue-skinned race who were supposedly the inspiration of the Indian pantheon.