Well, this week Batman: Gotham After Midnight #9 by Steve Niles and Kelley Jones came out, which means it's time once again for a monthly-ish check-in with how insanely awesome and/or awesomely insane Jones' Batman work is.

This "Nefarious 9th Issue" was full of the things Jones does so well.

The over-the-top, visual-operatic melodrama was in full effect for much of the issue, in which Batman discovers the burned corpse of his new lover, resulting in many panels of his forehead burning with red rage, and a few panels of him smashing his red glowing arm fist into a mirror or through a window to vent his frustration. Even Commissioner Gordon gets some neat dramatic imagery, like a panel featuring his glasses reflecting Batman's silhouette and he raging apartment building fire behind the Batman, or a two panels later, one of Gordon standing before the burning building, his hands thrust into his trench coat pockets, while torn pieces of police tape and wanted posters featuring the villain Midnight swirl in the wind around him, foreshadowing the fact that he's going to be a target of Midnight's.

There are also lots of cool bat-gadgets and Batcave scenes this time around, but this page is probably the best of them: 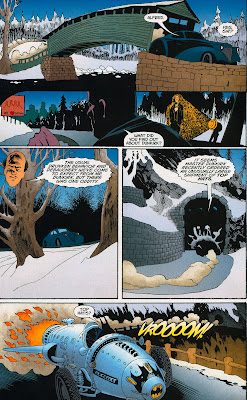 Yes, that's Bruce Wayne driving a nondescript, rich man's civilian car through the countryside while speaking to an R2-D2/CNN-style holographic projection of Alfred, then entering a tunnel, apparently pushing some kind of crazy button that activates all these hidden mechanical arms (panel four), and then emerging from the other side of the tunnel now dressed like Batman, his car completely transformed into some kind of strange two-wheeled, missile-with-a-cockpit style Batmobile.

I always call attention to how wild Jones' art and designs are, and there's certainly a lot of that in this issue as well (the very first panel, for example, has Batman charging into a burning building, his left thigh all of a sudden longer than his entire torso, and most of his entire right leg), but Jones can really, really draw.

Just check out the detail on this page, which you may want to click on to make bigger: 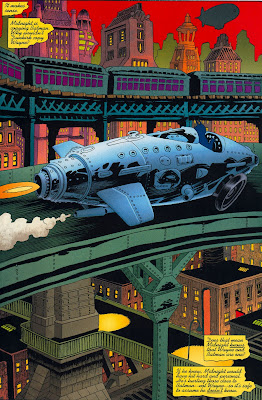 One could certainly say that the Batmobile looks ridiculous to them, or that they don't like the Batman design, but, wow, just look at the city Jones drew here!

Look at the details...all those little lines, all those little windows, the skylights breaking up the black planes of roofs near the bottom. It's a splash page, but rather than looking at that as an opportunity to rest, to slack off for 1/22nd of the book, Jones draws a page that looks as detailed and difficult as any multi-panel page in the book. H

ow often in super-comics do you come across a page like this where you just kind of want to linger for a while and admire the architecture, a page that lets you imagine what it must be like to actually be in Gotham, which isn't just New York City with the Wayne tower, more gargoyles and a couple of blimps, but a distinct, videogame/playground kind of place with multiple levels of bridges and rooftops for vigilantes to swing from, jump around on and pilot their super-rocket cars over?

Here's one more splash page, this one a lot less detailed, and featuring Jones interpretation of the current Catwoman costume (and not doing so hot with it, honestly): 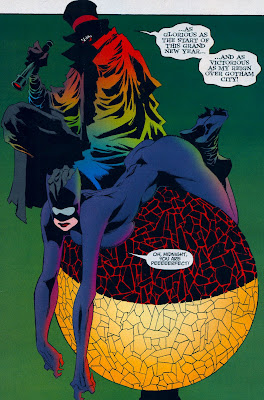 I like her hands though, and the weird, cat-like posture. Artists usually interpret her feline grace as a series of either athletic or seductive poses and stretches. Here she's just kinda collapsed like a cat, and, you know, despite the rep the jungle varieties have, cats aren't always the most graceful of animals.

That's not why I scanned this page though. Look at how her dialogue was written and/or lettered.

Um, shouldn't that be "Perrrrrfect," to indicate she's purring like a cat, and thus allowing Niles to make the hoary old perfect/purr Catwoman pun, rather than "Peeeeerfect," to indicate that she's...well, I don't know what drawing out the e into a super-long e sound indicates. That Catwoman thinks she and Midnight are perfect peers...? A pun about how he was just peering at Batman through a telescope?
Posted by Caleb at 1:14 PM

Hi, long time listener first time caller. I read that last Catwoman line as a send-up of the classic "purrrfect" line. I mean we've all come to expect it (or other lines like it), and it made me chuckle to it read something so out of the blue.

bartender to the stars said...

What a great artist !