Things I had scanned and had planned to post in the past, but never did for various reasons

Those of you who hang on my every word (that is, just me) may recall that on Monday night I mentioned that I was going to review a really cool small press book, but, because DC and Marvel's April solicits were being released and they're much easier to write about, I'd push that review off until Thursday night. Well, I'm not going to write that review tonight either.

See, I thought the book—Hellen Jo's Jin & Jam #1—was a 2008 release, since I'd seen it on at least one best of list, but the publisher informed me that it won't actually be released until later this month, so I think I had better wait until closer to the release date to review it.

So what will I post tonight? Well, I was cleaning out my scanned images the other day, and ran across a couple of things that I'd gone to the trouble of taking to the library and scanning for posts, but then ended up never doing anything with them.

Well, I'll do something with them now!

This was going to be a Friday Night Fights post, a four-panel Big Barda vs. Plas battle, but I ended up quitting trying to keep up with FNF, as it was too difficult to make sure I had something each Friday night when I was using a public library scanner and access was never guaranteed: 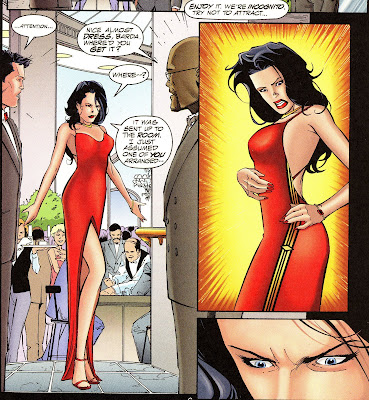 It's from 1997's JLA #33, Mark Waid's third two-part fill-in for Grant Morrison on JLA, when the latter was winding down his run and the former was apparently gearing up for his. One of the White Martians from "New World Order" that was trapped in a human body and identity thought it was Bruce Wayne and started impersonating him. Batman obviously knew it wasn't the real Bruce Wayne, but couldn't tell the rest of the team how he knew that (this was before the Brad Meltzer everyone-knows-everyone retcon, and the fact that Batman wouldn't reveal his identity to his teammates was a major plot point during Waid's run).

Batman had to separate the Leaguers who did know his secret identity from those who did not, and this is the "not" group. Plas, Barda, Orion, Steel and Green Lantern Kyle Rayner get dressed up and go undercover at a casino to keep tabs on the fake Bruce Wayne.

One has to suspend one's disbelief quite a bit when reading certain superhero comics. With this volume of JLA, for example, once had to just accept the fact that Plastic Man was never sued for sexual harassment or Boom Tube-d to an Apokalytpian fire pit by Barda or her husband.

The art here is by penciller Mark Pajarillo, who was the most frequent fill-in artist for Howard Porter, although I haven't seen his work anywhere in quite a while.

This was going to be part of a post collecting a bunch of Hulk's battle cries, but when I abandonded the idea when it started to look like too much work: 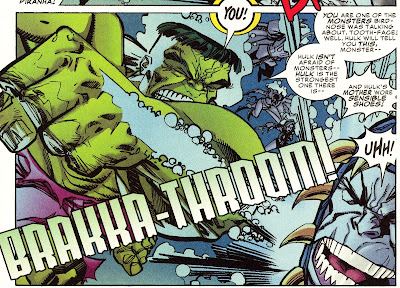 It's from Kurt Busiek and Erik Larsen's way too short-lived volume of The Defenders, one of my favorite comics ever. I believe this was from 2001's #7, part of an ongoing story in which Namor had his teammates help him liberate Atlantis from Attuma and a bunch of underwater villains, and Hulk was fighting Orka-with-a-K. Orka draws strength from whales, so he kept calling more whales to the scene to become stronger, which would make Hulk angry, and he'd get stronger, and the process just continued until the end of the story. The rest of the team was sitting around a table enjoying a victory banquet at the end of the story, and Hulk and Orka were still out there on the ocean floor whaling on each other (Ha ha!).

I liked just about every word of dialogue everyone spoke in this series, but I really like Hulk shouting, "Hulk's mother wore sensible shoes!"

A year or two ago, I was reading an old encyclopedia of superheroes, and at some point I realized that for some reason owl costumes almost always look really, really stupid. Even the coolest owl-themed costumes—the JLA: Earth 2 version of DC's Owlman, Ultimate Adventures' Hawk-Owl—were pretty goofy-looking, to say nothing of the Global Guardians' Owlwoman, whose most owl-like feature was that she had a single feather on her costume, or the original Silver Age Earth-3 Owlman, who just looked like less fit Batman wearing a taxidermied bird's head as a toupee.

Unfortunately, I gave up on this post before I even took notes, so I don't remember anything about this owlman— 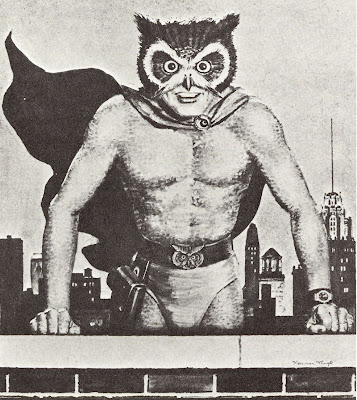 —although I think he was either from a novel or radio show, not a comic. His name was actually The Owl, same as the next fellow.

This "The Owl" is purple for some damn reason, but I kinda like the look on his face: 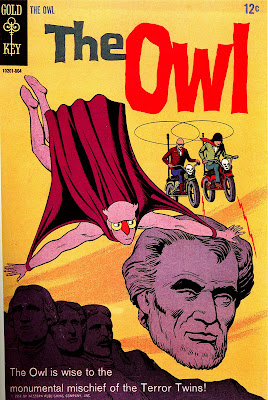 I believe Alex Ross was planning to use/is using him in one of those Project: Superpowers comics, unless there's another purple-rocking Owlman.

Finally, here's Owlwoman 1,000,000, from 1999's DC One Million 80-Page Giant, a member of Justice Legion-A. She appeared in the anthologies final story, "Crisis One Million" by Grant Morrison, Dusty Abell and Jim Royal: 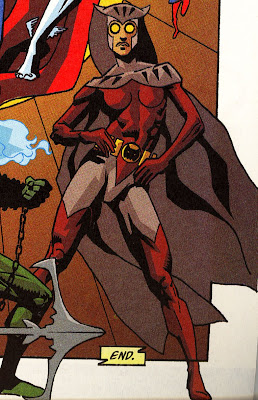 I assume Abell designed her appearance, but perhaps it was Morrison. It definitely looks Nite-Owl influenced, doesn't it? Like, maybe she just stole his costume and asked a tailor to alter it for her?

I don't know exactly where this is from, or what his deal is. I assume I scanned him to include in this 2007 post about Wonder Woman villains, and ended up not using him, perhaps because he wasn't as awesome as The Blue Snowman or Red Centipede. Oh, and linking to that post reminds me— Gail Simone, are you out there? Where's Mouse Man at? What's the hold up? He would be perfect for Wonder Woman or Secret Six. Catman vs. Mouse Man! Think about it, won't you?
Posted by Caleb at 3:49 PM

Poor Barda. She does seem to keep getting into these...situations. I do have that book however, and loved it.

I don't have the Defenders one however, and it looks to be an absolute hoot.

And speaking of hoots...yeah, those Owl suits are on the strange side.

"(this was before the Brad Meltzer everyone-knows-everyone retcon, and the fact that Batman wouldn't reveal his identity to his teammates was a major plot point during Waid's run)."

This *still* annoys me. At a time when JLA was the central pillar of the DCU (JSA was marketed as a spinoff, more or less; the existing Titans were launched in a JLA Teen Titans mini; Martian Manhunter got a series; etc), and was widely acclaimed as being better than any Justice League book had been in at least 10 years, and indeed was so central that *you made your big crossover event a Justice League story*, shouldn't you not retcon away major story arcs that were, what, 2-3 years old?

In the late 80s and the 90s, IIRC, it was decreed that Superman's published post-Crisis history was inviolable and unretconnable. If other things had to bend to accommodate, so be it, but, e.g., "Time and Time Again" happened the way it was printed, no matter what else happened to the timestream. That was unusually explicit and rigid, but surely something like it is the norm; the recent important stories of your most important books aren't the stuff you retcon away.

In retrospect, Meltzer just initiated the DiDio/Johns era of undoing post-Crisis history and returning as much as possible to the Bronze Age status quo ante, from Doom Patrol to Krypton. But I can't believe that it was part of a deliberate plan that far back, and it seemed to me like a totally gratuitous screw-up of the integrity of the fictional universe.

That Owlwoman costume bears a VERY close resemblance to that of the Crimson Fox -- especially the headgear.