We're all Batman...in our hearts 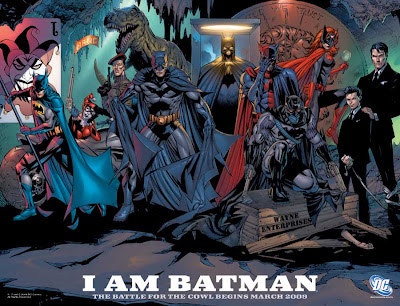 If you read any DC Comics, or if you read Newsarama.com, you've probably already seen the above image, a teaser ad created by Battle of the Cowl writer/artist Tony Daniel packed full of little visual clues to upcoming storylines for nerds to obsess over. Dan DiDio unveiled it as a sort of Christmas present around the holidays, but I didn't pay too close attention to it—beyond looking to see if Daniel drew any feet (he did!) and thinking, "Damn, that Two-Face Batman looks kinda cool"—until I got to the end of this week's Final Crisis #6, where it ran across two-pages as a giant house ad.

Upon closer inspection, I noticed something a little...odd about Bruce Wayne (or Dick Grayson?) and Tim Drake (or Damian?) on the far right of the image:

Oh come on guys, you're never going to quash those rumors about your relationship if you insist on all this kinky bandage leash dom/sub fetish play in public!

You know what got me really excited about the near future of the Bat-books though? 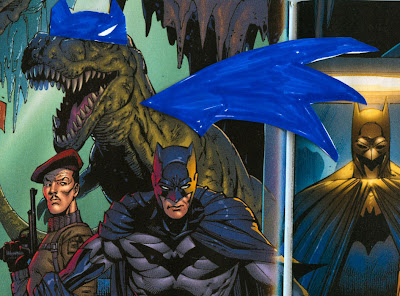 Is the robot Tyrannosaurus Rex in the Batcave going to win the "Battle of the Cowl" and get to be the new Batman? Man, no one will ever see that twist coming!
Posted by Caleb at 7:44 PM

Those two are Damien Wayne (Bruce's son) and Hush (recently had facial reconstruction to look like Wayne). Thinking Damien may use Hush to get his father's fortune.

"you've probably already seen the above image, a teaser ad created by Battle of the Cowl writer/artist Tony Daniel packed full of little visual clues to upcoming storylines for nerds to obsess over."

And for socially well-adjusted individuals to think about, too.

T-Rex Batman..FINALLY a character we all can believe in who will take the Joker out like a two bite brownie. We all know at the end that Dick will step up..wear the cowl for a bit and realize that he just can't fill those shoes - for the second time. No matter what he will always be in the old man's shadow.

The fact that all of Tony Daniel's dark-haired white men look basically the same is a problem for this kind of assignment, isn't it? We shouldn't have to rely on the clues like bandages in order to distinguish Dick from Jason from Bruce or Hush.

You've just figured out the one way to get me buying a Batman title on a regular basis again.