Not comics: Mo Willems has a new book 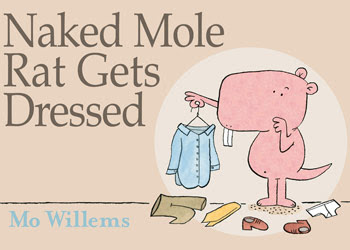 Mo Willems, the writer/artist responsible for some of my favorite children's books (Don't Let the Pigeon Drive The Bus, the Elephant & Piggie series) has a new book out, entitled Naked Mole Rat Gets Dressed (Hyperion). I wish I could report that it's a great book that you simply must read, but I honestly found it rather disappointing, due in large part to the fact that it has one of the best titles I've ever heard for a children's book that I half-expected the insides to follow suit.

Willems is a pretty great artist, of course, so even his lesser books are always worth checking out. His mole rat design is kinda neat (see the one above), and I really liked the overall design of the book; it's set entirely in naked mole rat turf, and a plain, black line extends horizontally thorughout the wider-than-it-is-tall rectangular book, suggesting underground tunnels. It's a nice bit of suggestion too, because other than that line, and the bits of sand that appear directly beneath characters and objects, the bulk of the pages are empty space. Willems' ability to create characters and suggest emotions in just a few simply lines has always been an extremely impressive, but this is the first of his books I've read in which I've noticed him building a lot out of a very little in terms of the setting.

Some of the standalone images are pretty funny—just the sight of a naked mole rat wearing only socks and breifs and contentedly putting on a pair of pants next to the title, for example—but once you get past the inspired title, there's not a whole lot to latch on to here. (Um, this is a book suggested for readers three and up, and I'm 31-going-on-32, however, so do take this whole post with the appropriate grian of salt; actual children will presumably find a lot more to latch on to than old man Caleb).

This is how the story begins:

There is so much to learn about the fascinating little creatures known as naked mole rats.

But, for this story, you only need to know three things:

2. They are a little bit mole.

So it's off to a great start! There is one exception to item number three, however, and that's, "Wilbur, the naked mole rat who liked to get dressed."

Three naked mole rats walk in on Wilbur, in the middle of tying on a tie in front of a full-length mirror, and they do not like what they see. Clothes are anathema to naked mole rat society, and yet Wilbur loves them. He and his peers lay out their differing points of view over the course of several pages, and they ultimately consult Grand-pah, an old and revered naked mole rat. Grand-pah thinks on the matter for a while, and then tells them to gather all of the naked mole rats together, as he wished to make a proclamation.

It's a nice message of tolerance, and one that's delivered with a light, humorous touch. It may not be Willems' best work, but his merely pretty good is actually pretty great.

To learn more about Wilbur the naked mole rat who likes to get dressed, click here. You can dress Wilbur yourself here. And here's Willems' own blog, which is well worth visiting every once in a while just to see the cool pictures kids give him (Like, check out this Obama).
Posted by Caleb at 6:55 PM

This Christmas, Aaron and I bought Don't Let the Pigeon Drive the Bus for every baby/small child we needed to buy presents for. This was after we stood in Barnes & Noble reading it out loud multiple times and laughing like fools. I am getting this new book like today, for myself, and seeing Willems' name on the schedule for NYCC was the first thing that got me all excited.