I have something of a bad habit of devoting a day’s posting to a subject other than comics, which is probably less than ideal given that this is a comics blog. Of course, I think children’s picture books overlap j-u-u-u-s-t enough with comics that it’s still well worth taking a look at some of them, even when they’re not the work of comics creators or presented in a comic book-like format.

So I won’t be making a New Year’s resolution to quit posting about the occasional children’s book here.

Tonight I wanted to talk a little bit about the work of Bob Staake, whom I had assumed was just an extremely talented children’s book illustrator, but, a quick poke around his website reveals, is a prolific illustrator whose clients include just about everyone who ever hires illustrators for anything (From The New Yorker on down).

It doesn’t take much looking to see what’s so exciting about Staake’s art. He constructs images out of a few big shapes, seamlessly fused together to both disguise themselves as components and emphasize their own simplicity. His colors are bold and bright, and he gives everything a jaunty, highly animated angle that makes each and every picture pop.

If it sounds like I’m gushing, I do have something negative to say: Staake’s not much of a poet, although he constructs the children’s books of his that I’ve read in rhyme. 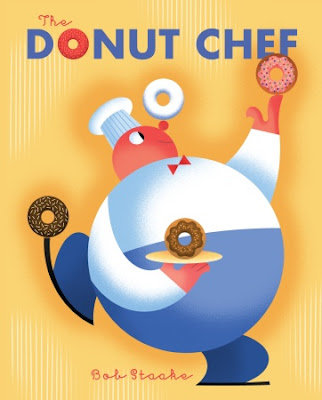 The Donut Chef (Golden Books; 2008) is the first book of Staake’s I noticed, the combination of one of my favorite subjects (doughnuts) and the striking cover image, with all of those repeating circles, attracting me.

It’s the story of a big, round doughnut chef who comes to town and opens an extremely successful doughnut shop called Donut Land. A surprisingly evil looking (for a baker) baker lurks around for a few pages, before announcing his intention to open his own doughnut shop—right next door!

The two compete fiercely, offering various discounts and incentives and, eventually, experimenting with ever wilder flavors and shapes, until they get so far away from the initial concept of a doughnut that it’s a stretch to even call their doughnuts doughnuts anymore. 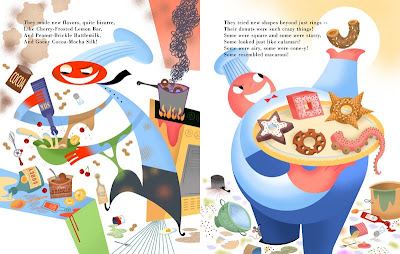 It all works out in the end, when a little girl asks for a plain glazed doughnut, reminding the big round chef of what doughnuts are all about.

I’m not sure I agree with the moral—that glazed are best*—but the artwork sure is agreeable.

Stake’s doughnuts all look good enough to eat, and he lavishes plenty of attention on the city streets, with its many passersby and cars, it’s slightly tilted, brightly colored buildings and the rainbow of soft, bright colors that make them up. It’s been a long, long time since I’ve read a picture book in which everything looked so nice that I kinda wished I could somehow step inside it myself.

From there I worked backwards through the two others my local library had. 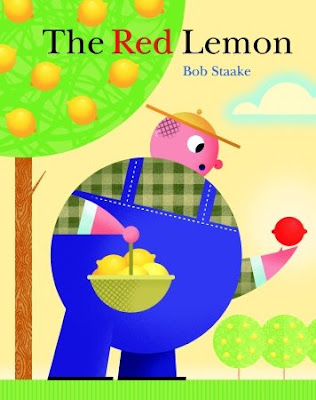 Next up was The Red Lemon (Golden Books; 2006), the story of a rotund lemon farmer by the name of Farmer McPhee, who looks an awful lot like the rotund doughnut baker.

The construction of Staake’s sentences can be a little awkward as he stretches for rhymes, the words chosen not for how natural they wound or how well they flow, but simply because of the sounds they make: 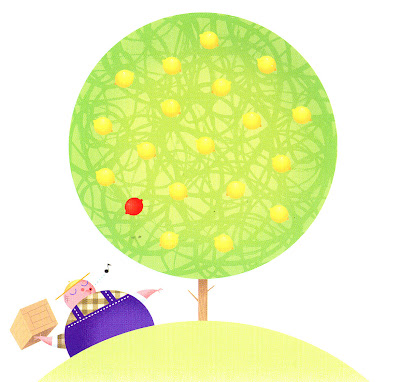 After we spend a few pages learning about how much Farmer McPhee loves lemons and his usual process of getting them from tree to store, the titular fruit raises its rind.

As McPhee is carrying an overflowing crate of Mcphee Farms 100% Yellow Perfection Lemons, he notices a red lemon on an otherwise yellow tree.

Staake’s use of color in this book is pretty great. The lettering of the word “yellow” and “red” is sometimes colored yellow and red, and in the scene where McPhee picks the red lemon and stares at it in angry contemplation, the bright yellow, blues and greens of the book so far disappear, and we get a beautiful two-page spread in which everything—the sky, the clouds, the ground, the trees, the fruit, McPhee—are all red, with only the whites of the farmer’s eyes and the font that the next few lines of rhymes are in standing out as white.

McPhee winds up and hurls the red lemon out to an island over the sea, and then two hundred years pass. In that time, the red lemon that hit the island has turned into a small red lemon orchard, and a vibrant community has grown on the island, based all around the red lemon industry, which is apparently quite a delicacy.

It just goes to show that…um…Hm. I’m not sure what the lesson is here. It’s okay to be different, because within 200 years you’ll be accepted?

Anyway, the art’s great. Here’s half of a spread devoted to showing us around the island a bit: 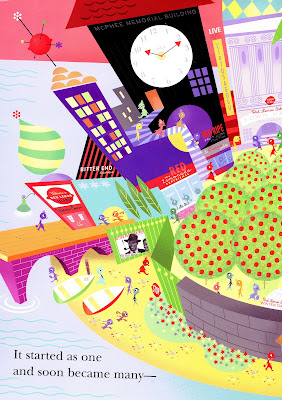 Staake’s art is packed with little details (check out the brand name on the island clock), and I really liked this one, although I don’t really understand it: 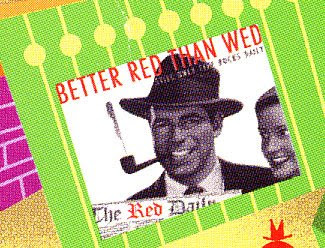 “Better Red Than Wed?” What the hell’s that mean? Better a communist than married? Red Lemons are even better than a life partner? 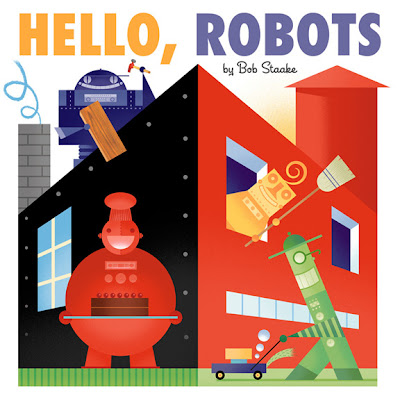 And the final Staake book for the evening is the one with a title even more exciting than The Donut Chef, Hello, Robots! (Viking; 2004).

This is the story of four robots who seem to all live in the same house and, according to the narration, apparently serve the narrator and the narrator’s family/roommates, although no humans are ever seen.

These robots are Blink, “the one who cooks our meals” (and resembles a red, robot version of the donut chef); Zinc, a purple handy-robot who “an fix things made of steel;” Blip, a green garden bot who “keeps our yard so green” and Zip, a yellow droid who “simply loves to clean.” 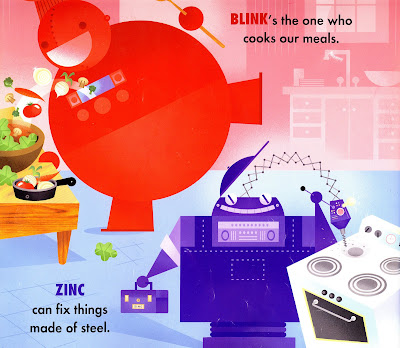 Each robot has its own color and its own function, and when their names are used, they’re in all caps and the color of the robots themselves (That is, Blink’s name is lettered in red, Zinc’s in purple, etc.)

The robots go about their business of cooking, fixing, yard-working and cleaning for several beautiful pages, and then they all join Blip outside for more work.

Then it starts to rain, which makes the anthropomorphic house kinda sad, and then suddenly four bolts of lighting strike the four robots, who immediately begin to malfunction. They continue to do their assigned jobs, but on different targets (Blip rakes the windows, Zip shines the grass, etc), which leads to chaos. 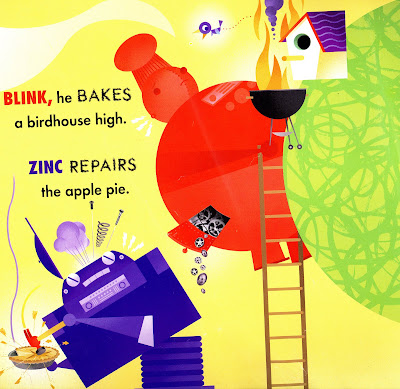 Then they come up with the perfect solution—they simply swap heads! 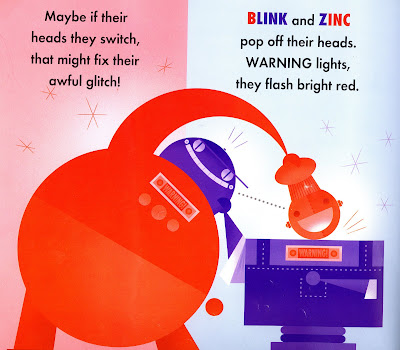 Note the lettering of their names once their heads are switched; it suddenly reflects their new color schemes. Now the heads force the bodies to do their assigned jobs, and on the right targets. It ends happily with the four of them gathered around a table, drinking tea and eating a chocolate tart. Can robots drink? Can they eat?

And the moral of this story? It doesn’t actually apply to humans; it’s merely practical advice to robots about staying out of the rain and part-sharing in general.

*Provided that is the moral, since everyone knows that the plain fry cake, perhaps with chocolate icing and sprinkles, is the very best doughnut. I may be misreading the message of the book, however. It may instead simply be a lesson in one of the most important aspects of starting a small business—location, location, location.
Posted by Caleb at 5:48 PM

As a mom who both (a) reads comics and (b) buys kids books, I think these posts are great. Of course, I realize my demographic is probably not your core audience. :-)

Staake's work is very interesting. Will check it out. Thanks!

These look like great books... although I don't think that the moral is "glazed are the best"; the moral is "don't get too experimental or too weird... it's okay to experiment and innovate, but do remember that you're making donuts". Substitute donuts for "comics", "science fiction", "roleplaying games", or "music", and you'll know what I'm trying to say.