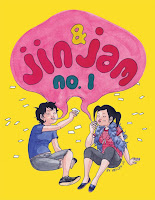 I’m pretty sure I wore a goofy grin while reading it, and I’m certain I exhaled exclamation points as my eyes fell on certain panels. And, when it was over, I felt kind of like I did after finishing the first volume of Scott Pilgrim or the first issue of Street Angel—like I wanted to recommend it to people, not merely in the form of a comics review, which I’ll get serious about doing in the next paragraph, but, like, just stopping people on the street and saying, “Hey, you should check this comic out.” (Which would be a terrible idea, really; stopping people on the street to say anything is usually a pretty bad idea).

So, this comic Jin & Jam—it’s a pretty cool one. Jam is a scruffy little teenage girl eating McDonald’s on a curb in front of a church with her friend Hank, who is smoking cigarettes. Jin is a much girlier-looking girl, suffering through the sermon inside, who comes outside and happens to meet Jam there.

Is it a match made in heaven? Well, they sure seem to think alike:

Later, Jam and Hank are drawn to a parking lot when they hear the call “FFFFFFIGHT,” and there they find Jin, out of her church clothes and about to fight Ting and Terng, “a conjoined bitch and a retard” (In Jin’s words).

The fight is brutal. Ting and Terng smash Jin into a brick wall, and one of their fists cave it in. Jin hits them with a garbage can, and this is the page that follows: 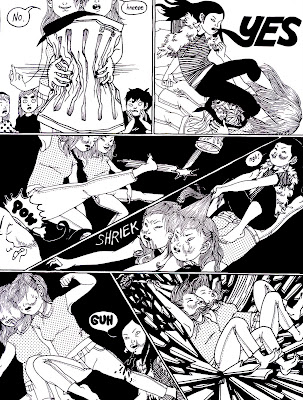 Before a clear victor emerges, a cop shows up, fully prepared to brutally enforce a law I wish existed: 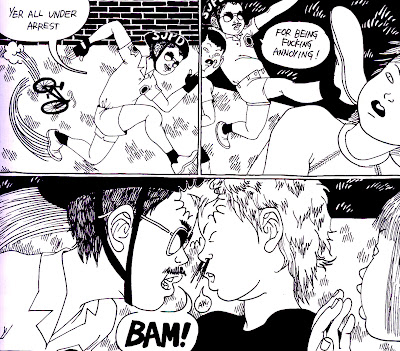 Oh man, if it were illegal for teens to be fucking annoying…

Jam rescues Ting, Terng and Jin, and when she hears that Jin has “never seen a band perform live before,” they try to go see a show, but they can’t because, duh, they’re just a bunch of stupid fucking kids, after all, and kids aren’t allowed in bars.

The book begins with a quote from Taiyo Matsumoto’s Black & White (which is perhaps more widely known as Tekkonkinkreet now): “We can beat ‘em…just you ‘n me!” I suppose the spirit of that quote, the two friends against the world theme of Tekkonkinkreet is what Jo was specifically evoking, and while the beginnings of that sort of story are certainly present, it’s also a preemptive declaration of influence.

The flatness of the art that sacrifices the illusion of depth (but not enough to hurt the images), the bold black and white art with little gradation, the character design, the weird angles, the violent fighting, the mentally challenged character whose head is always leaking liquids—there are a lot of bits and pieces that here that evoke Tekkonkinkreet, although the world it occurs in is more immediate and less fantastic than Matsumoto’s, while the violence and action are sillier and more fantastic.

While the art’s great, the swearing amusing and the fighting fun, what pushes this to the next level is how strongly Jo is able to render the characterizations—every bit as strongly as she renders them physically in the lines—and evokes the feelings of teenagerhood. The injustice of being denied into a club to see a band and being forced to loiter in a playground instead, not old enough to do grown-up stuff, but too old for kids stuff? Caught in between like that, and just hanging around, being angry and cool and destructive, hating and loving each other? Man, that’s exactly what it was like, isn’t it? And Jo’s caught it and put it all on paper, didn’t she?

RELATED: I really liked this detail. Jin, who doesn’t smoke, apparently takes all the cigarettes that are offered to her, and apparently makes some kind of necklace out of them: 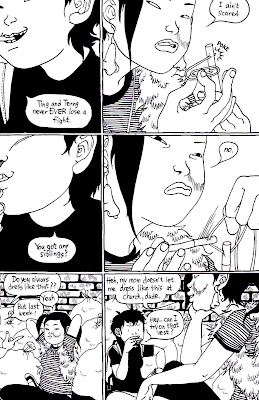 That’s awesome. I’ve never smoked, but I remember handing out with bad kids who did and being offered cigarettes all the time. I was attracted to how cool smoking was, yet repelled by how it’s, you know, really fucking expensive and deadly and all (I was something of an old man even as a teenager). I like how Jin doesn’t smoke cigarettes, but is still approaching them as trophies—are these the first few she’s been offered? Is the offer of a cigarette still so fresh and new an experience that it’s something to be savored and celebrated, even if you don’t actually want to smoke the terrible things?
Posted by Caleb at 6:04 PM

Damn, Officer Dangle is kicking ass today, but his bike is going to be long gone when he turns around...

Dude, you should smoke. It's awesome.