Battlefields Vol. 1: The Night Witches (Dynamite Entertainment) I’ll probably give this a more formal review at Blog@ this weekend, so all I’ll review here is that I didn’t much care for Dynamite’s trade design. It reminded me of the standard Marvel trade designs, which I don’t at all car for. The spine is all black with the company’s logo on the top, the inside front cover has an ad for other Garth Ennis-written Dynamite trades, the inside back cover looks a bit like a catalog, there’s an ad for the next Battlefields miniseries included, and the covers are all reprinted with explanations that they are covers and who did them and what number they are and if they’re variants across them. I liked the comic itself, but this was my first Dynamite trade, and I’m not too crazy about their trade design is all.


Black Lightning: Year One #4 (DC Comics) Hey, get out of Black Lightning’s origin story and fuck off back to the Batman comics, huh Talia al Ghul? Jen Can Meter and Cully Hamner’s six-issue story entered the unnecessary phase last issue, and it looks like that’s where it will stay for the rest of the run. It’s not bad though; it’s still pretty well-written and nicely illustrated, and hits the competently created name-brand super-comic spot perfectly. This issue is narrated by that really tall monster guy from last issue, and includes a lot of back-story on The 100 delivered by Talia al Ghul, daughter of the super-villain I’m most sick of seeing in DC comics at the moment.


Marvel Adventures Avengers #33 (Marvel Comics) Paul Tobin, Ig Guara and Sandro Ribeiro divide this issue between a plot by Stegron to conquer the world with reanimated dinosaurs and the Avengers taking turns trying to teach Ka-Zar how to drive. In New York City! It is, naturally, awesome—in fact, it’s probably Caleb’s ideal of the Platonic ideal of a Marvel comic. (Well, some of Tobin’s dialogue jokes fall a tad flat, but just, like, two out of the 50 jokes in here). My favorite part is probably a background gag, where we see a hotdog street cart vendor scratching his chin thoughtfully and regarding the passed out dinosaurs all around and, a few panels later, happily carries one of the smaller ones. I’m sure a 100% dinosaur meat hotdog will be less gross than whatever’s currently in hotdogs.


Mysterious The Unfathomable #2 (WildStorm/DC) In my review of the first issue of this, I expressed something I found rather unfathomable about the book—why it was being published on DC’s WildStorm imprint, which is mostly dedicated to TV/movie/videogame tie-ins and superhero universe books, as opposed to Vertigo or DC. Writer Jeff Parker explained why in this post.

Tucker Stone attended the WildStorm panel at NYCC, and offered this column about it. Pretty interesting reading for anyone perplexed by WildStorm’s line, which I assume is me and everyone else that doesn’t work for WildStorm and maybe DC Comics.

As for the actual issue? It’s pretty good. It reads like a Law and Order type of TV show, only with magic being investigated instead of crime, and all of the actors either have pot bellies or wide hips. I like Law and Order, and I like this too. 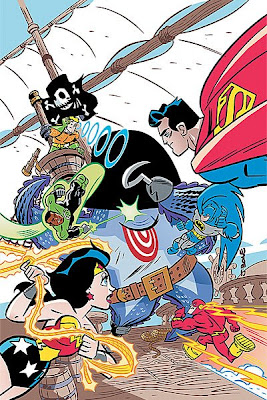 Super Friends #12 (DC) Yes, this came out last week, but I forgot to get it, as I usually forget to pick up at least one book each trip to the comic shop.

Like the last issue of Super Friends I bought, the J. Bone-drawn cover was my favorite part, and nothing quite like the scene depicted on it occurred within.

To be fair to creative team Sholly Fisch, Stewart McKenny and Dan Davis, it’s kind of hard to top a picture of Pirate Starro vs. The Justice League. I particularly like the fact that he’s got a hook hand and a peg leg, since starfish—as we’re reminded within—can re-grow their arms/legs/tentacles/points/whatever those things are called. Also, I love Superman’s expression on that cover. He’s seems angry but not furious, just kind of mildly unhappy; pissed, but somewhat stoically so.

Starro is in the story of course, as are pirates and, in a one-panel flashback or fantasy scene, he has some pirate gear on and says “Yarr!”

As for the story, it’s about pirates scaring people away from a certain spot, Scooby-Doo-style, and when the ‘Friends investigate, they discover a nefarious scheme by Starro to cause global warming to warm the globe faster to make Earth more suitable for him to rule. McKenny and Davis’ art is clean, smooth and easy to read, punctuated by a lot of neat sea life designs and depictions (I especially enjoyed all the little Starros’ expressions throughout), and they transition from straight lines on the panel borders during surface scenes, to curved, slightly pitching ones for underwater scenes. I like when comics do that.

Included within is this horrifying make-your-own Aquaman mask: 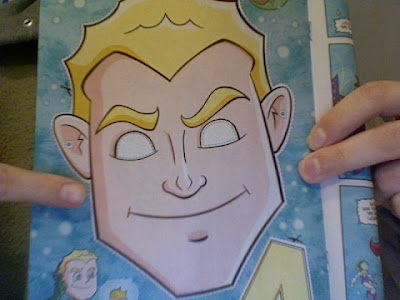 Which I’m not going to try out as I have other Super Friends craft projects, on account of it scaring me too much to look at long enough to cut out.

Question: Would Bone’s cover image have been funnier or less funny if Starro was wearing an eye-patch? I can’t decide.


Tiny Titans #13 (DC) In this issue, Raven recruits two more members for the Bird Scouts, The Pet Club meets at Stately Wayne Manor and Alfred foolishly leaves the kids alone to go to the store, Art Baltazaar draws a panel with every Brainiac ever in it and we get more of the best sound effects this side of Incredible Hercules.


Trinity #38 (DC) In the lead story, Supergirl, Dick Grayson and the others free associate the trinity back to reality, and in the back-up, penciled this time by a rather rushed-looking Mike Norton, The Justice Arcana prepares for their last stand against the Dark Arcana. Another decent issue.
Posted by Caleb at 2:45 PM

We didn't read any of the same books! I hate when that happens.

It's a little early to make a recommendation, but Tomasi's Outsiders was pretty good. It's only his first issue, not counting the special, so it depends where it goes I guess.