You know, at this point, I’m a little embarrassed to admit it, but I used to think Jeffrey Brown was just a one-trick pony.

Don’t get me wrong, I liked that one-trick he seemed to have perfected, the painfully revelatory, episodic books about his sometimes sweet, sometimes pathetic love life. It’s a trick any pony could be proud of, and admired for having.

Then I read Brown’s Be A Man parody of his own “girlfriend” book Clumsy, his humor collections (Feeble Attempts, Minisulk, I Am Going To Be Small), his superhero parody Bighead, his bizarre Transformers parody/celebration The Incredible Change-Bots (a true landmark in nostalgia-driven comics, being one of the few that tries to capture the pleasures that lead to the nostalgia rather than revisiting the actual source of the nostalgia) and Cat Getting Out of a Bag (a comic I love despite not even being all that fond of cats, which I’ve never actually shared a place with). Heck, Brown even draws a pretty great Dr. Doom.

Now that pony that I once regarded as a one-trick pony has proven itself to be one of the more versatile ponies working in comics today—okay, I’ve taken the “one-trick pony” thing way too far by this point, haven’t I? Sorry. The point is simply this: Jeffrey Brown? That guy is one versatile comics creator.

His latest project for Top Shelf Productions, the publisher of most of his stuff, capitalizes on that versatility, being an ongoing series of nicely-designed, digest-sized, spine-having mini-graphic novels, with each issue/volume being devoted to a different subject. It’s called Sulk, but it’s basically Jeffrey Brown Does Whatever He Wants For However Many Pages He Wants. The contents are standalone, but I imagine once you try one you’ll want the other—and any future issues. 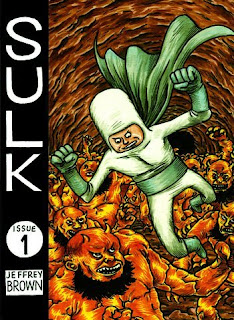 Sulk #1 is entitled “Bighead and Friends,” and features 64 pages of Brown’s pretty lame superhero Bighead, who always makes me think of a humanoid penis wearing a condom and a cape.

The contents should be familiar, if you’ve read Bighead or caught any of his prior appearances. Basically, it’s just superhero comics in Brown’s signature style, although this time around the parody seemed a little sharper and the gags a little funnier to me.

Bighead meets his greatest villain, The Author, a la Animal Man, we see the adventures of Little Bighead (the adventures of Bighead when he was a boy), we see the death and resurrection of Bighead, Jesus punches out the devil (Brown really needs to do a full-length Jesus project some time), and goofy heroes (I really like Sunflower, actually) and villains (Beefy Hipster?) appear and disappear.

It’s $7, which I remember giving me a bit of sticker shock the first time I saw it on the shelves of my shop, but I guess that’s actually quite a value for 64 pages, in an ad-free, “prestige format” comic (even if it is black and white). Seven dollars only gets you about 51 pages of DC Comics’ standard $2.99 books, or 38 pages of Marvel Comics’ $3.99 books. 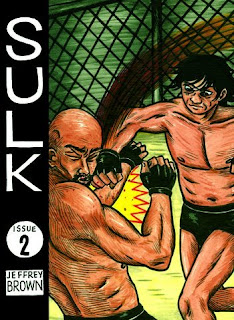 Sulk #2 is a little pricier at $10, but it’s also 96-pages long, and probably the least Jeffrey Brown Jeffrey Brown book I’ve ever read (and I’ve read ‘em all, save Little Things). This one boasts the best story title of any comic in recent memory: “Deadly Awesome.”

It’s sub-titled “A competitive mixed martial arts match from the S.C.F.C.L. (Superior Cage Fighting Championship League),” which I assume is a fictional version of a real MMA league or ultimate fighting whatever that they show on cable and that an old roommate of mine used to be pretty into but I never watched because it seemed too much like sports to me.

The book is a somewhat tongue-in-cheek (tongue-slightly-in-cheek, or tongue-in-cheek-but-just-barely-in) drama about a match between veteran fighter Haruki Rabasaku and younger, bigger, more powerful Eldark Garprub. A few pages is spent on the fight commentators/announcers/whatever they’re called in this sport setting up the story, introducing us to the fighters and the rules, and then the bulk of the book is devoted to the match—an 80-page fight scene.

The fight has the size and scope of a manga battle, yet aside form the black and white imagery and some occasional speed lines, Brown’s storytelling remains Western in style, the two fighters more or less narrating their strategies in thought bubbles, with the announcers and Brown chiming in to describe what we’re looking at.

This is the most realistic I’ve seen Brown’s work look before, at least for a sustained work, and it’s pretty nice stuff. It looks much more polished and fussed-over than usual, with lots of lines on the page, giving the surfaces a grittier feel.

The story is more or less all sports story cliché, but Brown livens it up with a lot of extremely weird touches, and a wild use of various layouts that give the book a surprisingly fluid look. (My favorite part is probably a two-page spread that, on the left page features a 12-panel grid, chopping up a splash of Eldark straddling a fallen Rabasaku and trying to punch his face repeatedly, and, on right, two small panels of Eldark freaking out about how Rabasaku keeps blocking his punches, and a big panel showing a close up of Eldark’s face, with tiny little Rabasaku faces floating all around his head, the caption reading: “His face, not a bloody pulp, mocks me!”)

The back flap functions as a next issue box, and it shows a picture of a Godzilla-ish monster menacing a trio of tiny human figures. It bears the title “The Kind of Strength That Comes From Madness,” and promises, ahem, “Giant Robots! Pirates! Elves! Giant Monsters! Time Travelling Infants! Science fiction and fantasy filled fun!”

Admittedly some items on that list are pretty played out, but elves? Time traveling infants? That sounds pretty promising—particularly if Sulk #1 and #2 are indicative of the quality.

RELATED: For a second opinion on Brown’s first two Sulk issues, I’d highly recommend you check out Dick Hyacinth’s review here; in addition to being an incisive comics critic and damn good writer, Hyacinth knows more about this MMA fight stuff than any human being I’ve ever crossed virtual paths with, and thus offers a valuable view point on “Deadly Awesome” (Not that I’ve crossed virtual paths with many MMA fans, of course).
Posted by Caleb at 9:16 PM