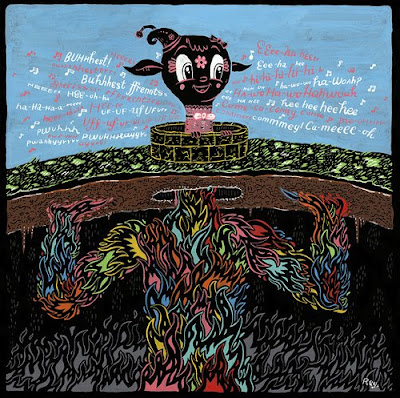 Beasts! Book 2, like 2007’s Beasts!, is a very well designed thematic art anthology, as well as a book-shaped objet d’art perfect for decorating your coffee table with. As such, it isn’t actually comics, but it is published by a publisher that publishes a lot of comics, and many of the artists who contribute to it come from the world of comics, so I think that’s close enough for horseshoes, hand grenades and blog posts.

Here then, in lazy, don’t-have-to-write-a-real-introduction-or-any-transitions format are some random thoughts I have about it.

1.) It’s expensive. Not overpriced or anything, just kind of expensive. That’s why I’m talking about it now in February of 2009 instead of back in October of 2008 when it was originally released; costing about $35, it was a little pricier than I could comfortably afford, so I had to wait for it to show up at the Columbus Metropolitan Library, and then wait my turn for it. Fantagraphics probably couldn’t have (and/or shouldn’t have) tried a lower price point, because as nice as this thing looks, you certainly get your $35 out of it (Click on the link above to check out a slideshow of the book’s various angles and parts…it is a seriously nice looking book). So I’m not complaining, I’m just observing. If I were rich—say, if I made tens of thousands of dollars a year—I would totally have bought this the first Wednesday it showed up in my local comic shop.

2.) It reminded me of the kind of books I used to like to read when I was a youngster. As a kid, I used to love going to the library and checking out encyclopedia-style books of monsters, mythological creatures and such-like. Because they didn’t offer stories per se, but just characters and scenarios for stories, I found them somehow really stimulating. They offered fuel for the imagination, fodder for play and daydreams and drawings, and that has always been just as engaging to me as actually reading a story. The brief text piece that accompanies each of the beasts in this book function pretty much just like that. Each entry therefore gives me something to read and think about, and an image to pore over for a bit. In that respect, I guess this is somewhat similar to a work of comics, except rather than the verbal and visual working in tandem, they take turns engaging me as a reader throughout.

3.) As with the first book, I’m not sure what to make of the longer text pieces. Editor/curator Jacob Covey again includes some longer prose pieces here, and they are interesting and well-selected. Cryptozoology giant Loren Coleman provides the introduction (“Mainstreaming Cryptozoology”), there’s an interview with real-life monster hunter Ken Gerhard, and scientist Richard Ellis talks about krakens, but I wasn’t sure what to make of these the first time I read through the book. The type of reading they ask of the reader seems so different from the type of reading the beast entries ask, that I had trouble going back and forth. In the end, I skipped over them, and came back later to read them, once I had finished looking at the pictures and reading the descriptions.

4.) There sure seemed to be a lot of Finnish monsters. I’m one-quarter Finnish, and one of my better friends spent a year as a foreign exchange student in Finland and learned to speak the language, so I’m somewhat fascinated by Finland, and was happy to see how many beasts my grandmother’s grandparents’ homeland once hosted. Ajattar, Hiisi, Iku-Turso and Nakki are all of Finnish origin. There also seemed to be a lot of Japanese monsters; in fact, there are far more Japanese ones than Finnish ones, but I guess that didn’t surprise me, because Japanese mythology and folklore is so much more embedded in our pop culture (or at least the strains of geek pop culture that I’ve been most interested in).

5.) There are all sorts of monsters in here I’ve never heard of. Barbegazi, Cadejo, Al-Mi’raj, Elephant-Tiger, the Iku-Turso, Ivunche, Tikbalang, Vouivre, Wivre—these are all totally brand new to me. I was particularly interested in the Elephant-Tiger, because it sounds so cool and so charming that it seems odd I’ve lived to be 31 without ever having heard of it. Basically, it’s the unimaginatively named result of elephant and tiger crossbreeding. In Olivier Schrauwen’s picture, they’re pretty freaky looking. Imagine a headless elephant, and, where the neck hole would be if you chopped the elephant’s head off, there’s a gray tiger’s face there. Looking at the one in the foreground, it’s hard to imagine how it gets anything up to it’s rather tiny mouth, but there’s another in the background with a victim dangling form its jaws, so apparently it’s possible.

6.) Nahan Fox draws the best damn Chupacabras I’ve ever seen. Here’s a cryptid of which there are scores of different descriptions of, and I’ve seen just as many different visual depictions of, but Fox’s is just fantastic—it looks at once like something that could exist in nature, and which was also absolutely terrifying. Sorry, I’m not going to post it—this books is too nice to scan things from.

7.) If I could have one of these images in the form of a gigantic, museum-sized painting, I think I’d want it to be Travis Lampe’s Hydra.

8.) There are some very cute monsters in here. Matt Leines’ Tarasque, Kathleen Lolley’s Domovoi and Aya Kakeda’s Mapinguari are all just darling.

9.) If I could read a whole comic book about any one of these beasts, I’d have a hard time deciding between Kim Deitch’s Jersey Devil or Roger Langridge’s Spring-Heeled Jack.

(The image at the top of this post, by the way, is Ray Fenwick's Shaitan, the scariest fucking thing in the whole book, and an image I found through Google, so I didn't have to risk damaging the copy of the book I currently have in my possession in a scanner)
Posted by Caleb at 9:14 PM

I had honestly never heard about these books, but I love cryptozoology. Not in a "these animals really exist, we just haven't found them" way, but just as a very interesting parts of different cultures.

By the way, do you read Proof? Because if you don't, you are seriously missing out on some good stuff.

Congrats on making a fool out of yourself on both Newsarama and PostmodernBarney, which, I, too, stop by daily. Which I would continue doing for this blog, too, but...

I had honestly never heard about these books, but I love cryptozoology.

Then you'll probably dig 'em. The premise is animals that at one time or another people thought actually existed, so there's a mix of creatures from mythology, folklore and modern cryptozoology. The entries are just a paragraph or so long, but I've found both volumes to be good introductions to interesting beasts to learn more about, an great artists to learn more about.


By the way, do you read Proof? Because if you don't, you are seriously missing out on some good stuff.

No, I never have...it's one of those I'll-read-it-in-trade-someday-if-I-hear-it's-real-good type of books. I'll definitely see if my local library has it in trade yet though.


Congrats on making a fool out of yourself on both Newsarama and PostmodernBarney, which, I, too, stop by daily. Which I would continue doing for this blog, too, but...

What's that?! An anonymous stranger thinks I'm a fool and will no longer continue to read my blog, something from which I derive absolutely no actual benefit from him doing? Anything but that!

I mentioned Proof because it deals with cryptozoology, the title character is actually Bigfoot and you get to see a whole bunch of other creatures.

As a side note, I read the stuff over at the Newsarama blog, and it feels like people are blowing it out of proportion. That's just my opinion though.