A couple of not-really-book-reviews, of one book I read and one book I did not. 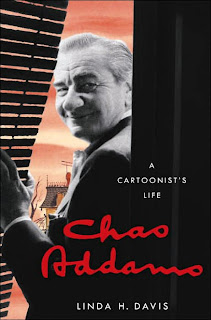 When you hear the words “a cartoonist’s life,” what do you think of? Sore backs, anonymity, ink stains and poverty? Or fast cars, a harem of glamorous women, fame, wealth and a lot of fancy parties?

Perhaps it depends on the year, or the cartoonist, but I tend to think of the former, rather than the latter. Perhaps that will change now that I’ve read Linda H. Davis’ Charles Addams: A Cartoonist’s Life (Random House; 2006).

I borrowed it from the library on a whim, being between prose books at the time and realizing I knew pretty much nothing about Addams other than that he was a cartoonist and he created The Addams Family, who were on Scooby-Doo (and in a couple of movies from the ‘90s; I don’t think I’ve ever actually watched an episode of the original live action TV show).

Well, now I do know some things about Charles Addams.

While rather leisurely making my way through Davis’ book over the last few weeks—20 pages here, 30 pages there—I read as many collections of his work that I could find in my libraries (The World of Charles Addams, Happily Ever After: A Collection of Cartoons to Chill the Heart of Your Loved One, Chas Addams’ Half-Baked Cookbook ) and even re-watched the two movies.

I’m perhaps ill equipped to assess how good or how bad a biographer Davis is, since I have no special expertise on her subject or on biographies in general. I did find it to be an enormously entertaining read, in large part because of what an extremely colorful life Addams lead (much of which was a complete surprise to me, which no doubt helped contribute to how entertaining I found Davis’ book), which is something a biographer has little control over. I suspect that, as with documentary filmmaking, the choosing of the subject and/or a certain amount of luck ends up playing a role in the finished project.

I do know that Davis did an excellent job of defining and summing up what exactly was so compelling about Addams’ cartoon work (comics being a subject I may also not have any great expertise with, but I at least have lots of experience thinking and talking about). Her focus is on Addams’ life rather than any sort of aesthetic study, but obviously his body of work plays a big role, and whenever she devotes attention to it, Davis writes intelligently and incisively about it.

When I would read her writing on Addams’ comics, comics that I would have just read since I was going back and forth between her bio and his collecions, I would nod in agreement, and, when I came across something in one of his comics that I had just read her talking about, I would recognize it and think, “Oh yeah, Davis was right about that too.”

If there’s any weakness with the book, I suppose it’s one that befalls most biographers—I can’t help but wonder if she goes too easy on Addams. He certainly seemed to have quite a few caddish proclivities, but he’s never portrayed as some kind of selfish monster. Of course, everyone Davis talks to or hears from in some manner or another sure seem to have been terribly fond of Charles Addams, so maybe his many infidelities and way with women in general was forgiven on something approaching a universal scale.

That, and I found myself wanting more pictures. The book includes plenty of reprinted cartoons and some sketches, as well as some photos of some of the players, but I could definitely have used more, particularly of the latter. Davis does a good job of conjuring up Addams’ houses and collections, his friends and family and lovers, but, man, I really would like to have seen some of this stuff for myself, you know?

Anyway, if you’re looking for an interesting biography of an interesting cartoonist, I’d definitely recommend this book, particularly if you, like me, aren’t terribly familiar with Addams. 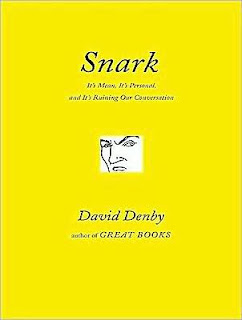 David Denby’s Snark (Simon & Schuser; 2009) seemed like a book I should read. It’s true it doesn’t have anything to do with comics, but as anyone who spends much time online has noticed, it’s both a word you hear an awful lot in the comics blogsophere and a form of communication you see employed quite a bit.

The sub-title—It’s Mean, It’s Personal, and It’s Ruining Our Conversation—made it sound like snark may be a pretty bad thing, so I was kind of interested in what author Denby had to say about it.

That, coupled with a very short page-count (less than 150 pages) and a bright, yellow cover was enough to convince me to reserve a copy of it from my local library.

I didn’t make it very far. I’m really stubborn when it comes to reading and rarely ever stop reading something once I start, no matter how bad it is, so when I say I couldn’t finish Snark, I mean that as a pretty damning assessment. The only other books I’ve started and quit that I can think of at the moment were 1) an Ann Coulter book (I can’t remember which one now, as they’re all about the same—it’s the one about how Joe McCarthy wasn’t really so bad), which I figured I’d try out because hey, a lot of people seem to like her, and if she can continue the same level of insanity of her written columns for 200 pages, that might be interesting to read, and 2) Michael Moore’s Dude, Where’s My Country? which was given to me as a gift by a relative and Oh my God that guys sucks at writing books too!

Denby’s a little easier to read than Coulter, but even more irritating than Moore, based on how far I got in each of those before calling it quits.

It’s not entirely Denby’s fault that I gave up on him. The day I brought his book home from the library was the same day I saw this post on Wonkette entitled “The ‘Wonkette Part’ Of David Denby’s Book Really Just A Bunch Of Major, If Not Libelous, Errors.”

The gist of the post is that Denby used two examples of Wonkette posts to damn their brand of snark, and neither example he used was true, despite how easy it was to check their veracity. For example, reading the byline to determine whether or not a writer named “Jim” is male or female.

That sure deflated my enthusiasm for the book, as Wonkette’s Jim Newell points out, “Lord knows what else he makes up to fit his narrative in the rest of the book, but of the two (2) Wonkette pieces he analyzed, he got two (2) entirely wrong.”

I made it through the first part though, the introduction to the seven-parts the rest of the work is divided into. Strike Two was his weird understanding of the word “troll” as applied to online communication. Despite keeping a daily web log on comics and contributing daily to Blog@Newsarama.com for just about two months now, I am extremely tech-ignorant. The extent of my online knowledge prior to, oh, 2006 or so was looking up contact info on websites for articles I was writing, Googling shit for said articles, and checking Newsarama.com’s message boards for news about upcoming comics.

So perhaps “troll” used to be used to refer to something else, but it was my understanding that it was an abusive poster on a message board or comment thread, just kind of being a jerk in some form or another.

Denby defines it as some sort of malicious hacker, and references some form of online vandalism by trolls. Like I said, it’s very possible that I’m the one who doesn’t know what a “troll” is in an online context, but I’ll be damned if that wasn’t the first time I’ve heard it applied to a dangerous hacker.

Strike Three came near the end of the introduction, where Denby tries to differentiate between good, healthy snark and bad, unhealthy snark. The Daily Show’s John Stewart, Stephen Colbert, Saturday Night Live, The Simpsons, Family Guy and South Park? That stuff is all great snark. The comedians and writers involved use snark “right.” Some people don’t. Who are those people? I don’t know; I didn’t get that far. But the premise seems to be that good, healthy snark is that which Denby personally finds amusing, and bad, unhealthy snark is that which Denby personally does not find amusing.

Maybe I’ll try again later at some point, but, if any of you are similarly interested in the subject of snark and/or bright yellow covers, I just thought I’d offer a word or 800 of warning.
Posted by Caleb at 4:39 PM

I adore Charles Addams, so I may pick up the biography. I was not at all familiar with the second gentleman, but, as a former History Major, if there is one thing that I hate, it is poor research. So I'll be steering clear of the second book.

I enjoy reading David Denby's film reviews, although I rarely agree with him, but everything I'd heard about Snark was that it was just a miserable waste of time.