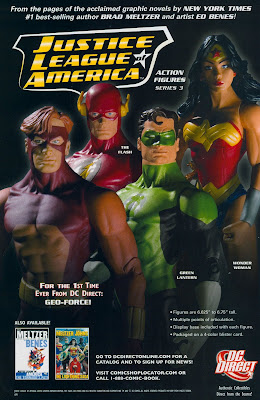 Last week's DC comics included the above house ad announcing a few more figures in the line that DC Direct has been putting out based on Brad Meltzer's terrible, terrible (but thankfully brief) run on Justice League of America.

This part caught my eye:

Ha ha, of course there's never been a Geo-Force collectible action figure before now because hey, no one likes that guy, right?

Actually, someone must like him, and maybe that someone even collects DC Direct action figures. If so, that person is going to be pretty pumped about this particular ad—it was made especially for them!
Posted by Caleb at 8:36 PM

Labels: everybody loves geo-force, phoning it in

Wow, who the hell likes Geo-Force? Especially with the lame off-orange and off-yellow costume. His yellow and green costume was awful too, but at least it was somewhat more distinct.

Are there any Geo-Force fans?

How dare you mock the monarchy of Markovia!

Counting me, there are at least four Geo-Force fans in the Greater Columbus area.

I went to the Laughing Ogre the other day to get that figure, but they were sold out. They said they got three copies in. So I'm wait-listed.

Ah ha, there you are! This post was particularly for you, Tony.

I'm super-curous about how DC Direct works exactly, because it seems to me a Geo-Force monthly probably wouldn't last long in the current market (nor would hardly any third-tier or lower DC or Marvel hero ongoing), bu they'll still do a figure. It seems to me more people read comics than buy figures (but maybe not), so I don't know how that remains profitable. (And not just Geo-Force figures, but a ton of the very specific sorts of DC Direct toys).

I wonder if Columbus should market itself as the World's Capital of Geo-Force Fans...?