Man Up, Martian Manhunter! Pt. 4: The villains of Salvation Run

Welcome to the latest installment of "Man Up, Martian Manhunter!" our occasional series on how the Martian Manhunter is constantly getting his ass handed to him by vastly weaker opponents. Today we're going to discuss Salvation Run, a terrible, terrible miniseries about the Suicide Squad capturing pretty much every supervillain on earth and then teleporting them to a cosmic Australia penal planet for a few weeks. It was collected as JLA: Salvation Run, and I reviewed it here if you want to know more about it.

Before we get to the scene in which the Martian Manhunter gets wrecked by a bunch of Flash and Batman villains, let's first review his vast catalog of powers:

—The ability to change shape

—Psychic powers that allow him to read minds, communicate telepathically and control the thoughts of others to a certain extent

In other words, he's kind of like Superman with a bad cold + Charles Xavier + Plastic Man + The Vision, and most of his panels should last about two panels, and go something like this.

They never do, of course. And why is that? Is it because it is just too hard to write such a powerful character? Is it because most of the people who write stories featuring Martian Manhunter just aren't terribly creative people? Yes. Or maybe, just maybe, J'onn J'onnz has a death wish, and is always deliberately throwing fights in the hopes that someone will kill him. Suicide by super-villain. There's really no other way to explain some of his losses.

So let's first set the stage. Martian Manhunter, who has changed clothes and the shape of his head since the last time we did one of these (if you want to find out exactly why, I'd suggest you read World War III, but really, no one should have to read that), has used his powers to disguise himself as a new version of the villain Blockbuster in order to infiltrate the villains on the prison planet and report back to Batman about them.

When Lex Luthor and the other villains catch Catwoman spying on them, she attempts to deflect their suspicion, by outting the Martian Manhunter. (She knew J'onn was disguised as Blockbuster, because she caught him resuming his normal shape to call Batman; apparently, he gets better reception when he's Martian Manhunter shaped).

Having been busted by Catwoman, he resumes his Martian Manhunter shape, raises his hand like a Shakespearean actor, and explains that he's infiltrated them to see why they were sent to this planet. At that point, Catwoman adds, "And what's more? He's got some kind of communicator!"

That's when someone bounces a piece of fruit off his face, and Resurrection Man villains The Body Doubles and Titans/Outsiders Mammoth attack him. He absorbs some physical blows that a guy who can turn intangible shouldn't have to, but nothing actually threatening to him. 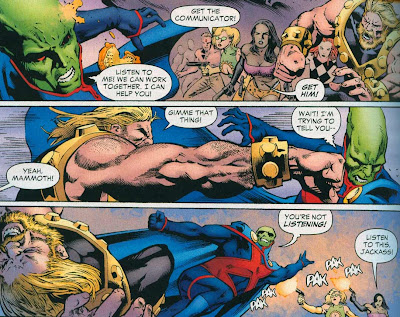 I like how frustrated he is by the fact that the villains won't stop to listen to his explanation. If only there were some way he could communicate information directly to their brains without having to bother having the sound of his voice heard...

Catwoman narrates her escape, thinking that at least J'onn has superpowers and can take care of himself, whereas she couldn't have fought them all off. Although he has superpowers, he hasn't eyt deiced to use any of them besides flight, and continues to gesticulate grandly while Bane and Manticore grab his cape. 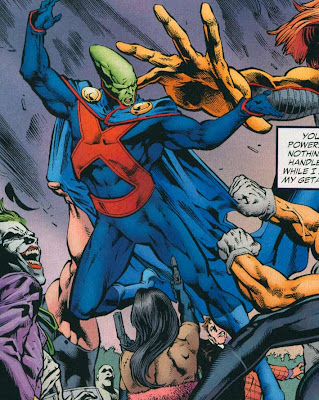 Finally convinced he's going to have to fight rather than talk with the villains, J'onn stubbornly refuses to become intangible or flee, but trades punches with his attackers. 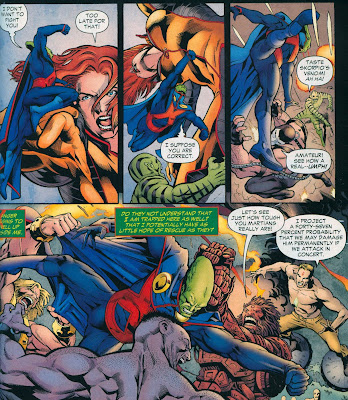 J'onn continues to think to himself how this is getting him nowhere, while Luthor and the Rogues plot. Here things get a bit confusing. (This is written by Matthew Sturges, and drawn by Joe Bennett and Belardino Brabo, so if the narrative gets murky here, I guess we have to blame them). 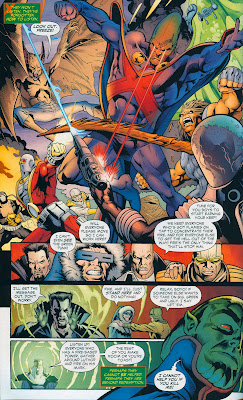 "I can't even see the green punk!" Captain Cold shouts, which would make sense if J'onn had turned invisible which, remember, is one of his very useful powers, but he hasn't, as the reader and all of the characters who aren't Captain Cold are able to see him. Perhpas Captain Cold simply can't see him because the slots in his glasses are so thin?

Abra Kadabra broadcasts the plan by...shouting? A magic shout? Or something? J'onn, who, remember, is also telepathic and can read minds, so should be privy to any information passed between the villains, even if it wasn't spoken out loud, as it seems to have been on this page.

Anyway, J'onn finally realizes that it might be time to leave ("I've stayed too long. There's nothing more I can do"). Wonder Woman villain Silver Swan and DC's most famous rapist Dr. Light distract the still tangible, still visible Martian Manhunter, while Heat Wave, Effigy, Tarpit, Deadshot and whoever the guy in the third panel with the red visor is shoot their fire weapons at J'onn. (Fire is, of course, his only weakness).

That's followed by a two-page splash spread of J'onn falling out of the sky, and then he hits the ground...

...and Bane checks his pulse. They've done it! They defeated the Martian Manhunter! He's not dead, by the way, just knocked out in that last panel.

I like the first of those three panels though. Let's zoom in on a few specific parts of it. 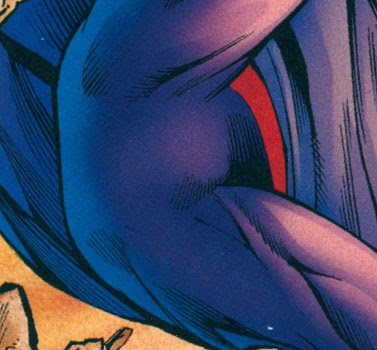 This is one instance where his new costume is actually preferable to his older one. With a full pair of pants rather than the little blue briefs he used to wear, he's now free to splay himself wide open without fear of pushing any comic books he's starring in into mature readers territory. 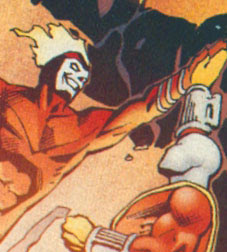 So you see, the Martian Manhunter is not the only one to lose his dignity in the course of Salvation Run.

He's setting him up for a bullet to the brainpan. Or blocking his hand to set up a gutpunch.

Well, the one benefit of MM being dead is that no one has to write him badly anymore.

And yet in that story by Joe Kelly and Doug Mahnke, J'onn smacks down the entire JLA without breaking a sweat and is only defeated in the end by his own conscience (by way of crawling out of his own chest and head-butting himself). Superman even makes a speech about how the thought of fighting MM makes his balls shrivel (I'm paraphrasing).
Ergo, by the transitive property, the JLA can be defeated by Bane, Captain Cold, and the Body Doubles.

Oh, and Effigy. Who, if I'm being honest, maybe isn't that cool.

Salvation Run is probably the main reason I was so worried when Sturges was named to take over on Blue Beetle. Because Sweet Baby Jeebus is it a piece of shit...

As someone mentioned the Kelly/Mahnke story is one of the few stories where JJ's true potential is shown-even if he did have to revert to a pre-historic type of martian.

Man, I miss the White Martians. There wouldn't be no uppity Kryptonians flying around making trouble if they were still on the scene.